Posted at 17:54h in Completed, Earthworks, featured by Howard
Share

“The fairies, besides being vengeful, are also very arrogant, and allow no interference with their old established rights. There’s a rath in the Queen’s County only four yards in diameter, but held so sacred as the fairies’ dancing ground that no one would dare to remove a handful of earth from the mound. And at night, the sweetest low music could be heard flirting round the hill, as if played by silver bagpipes. One evening, a boy lay down on the rath to listen to the music, and without thinking, began to gather up the balls of the clay and fling them hither and thither in sport. When suddenly he was struck down by a violent blow and became senseless. There he was found by his people who went to search for him. And when he came to himself, he bleated like a calf, and it was a long time before he recovered his reason. For the power of the fairies is great, and none can resist it.”

Drag within the image to explore the Fuerty Fairy Fort in virtual reality.

The little hamlet of Fuerty, on a byway 7 km (4.4 mi) SW of the town of Roscommon, passes by in the blink of an eye. The only structure that might be noted by a visitor is the ruined 17th century church and early Christian graveyard, located on the site of a much older abbey, destroyed and its monks slain by Elizabethan forces.2 Nearby is the Castlestrange Stone, with its enigmatic La Tène style decorations.

On a hill to the south sits the farm of Liam and May Connolly, whose family has grown their barley, oats, and potatoes, and raised their sheep and cattle here for four generations. In the field just beyond the Connollys’ comfortable home, however, is evidence of a much earlier and far more primitive occupation: a circular earthen bank, or rath, some 35 m (115 ft) in diameter, which defines the shape of an ancient ringfort. Such structures, of which there may be 45,000 remaining in the country, likely date from the Early Christian period (fifth to eighth centuries CE). There are several others nearby.

While they are termed “ringforts,” it is more likely that they filled a domestic rather than a defensive purpose. There may have been, inside the circular enclosure, wood and wattle structures intended to shelter people as well as livestock. There may have once been thousands of other ringforts. But, seen as impediments to efficient tilling, they were readily ploughed over centuries ago. However, the fact that so many of these vulnerable structures are yet to be seen in the country, in spite of the economics of removing the acreage from production, may be attributed to the other name for these ancient spaces: “fairy forts.”

The medieval legends recounted in the Book of Invasions (Lebor Gabála Érenn), which may have incorporated much earlier oral traditions, explain how the defeated magical race of the Tuatha Dé Danann were forced to live underground. In time they became the race of fairies, the “gentry,” or “good people” who live a parallel existence to the human race in the domains beneath their earthen fairy forts. There is more on the archaeology of ringforts and the lore of fairy forts on our pages about the Ardnamagh Fairy Fort in Co. Meath and Tara Fort in Co. Down.

According to Liam Connolly, the fairy fort in sight of his kitchen window was used as a burial ground during the terrible years of the Great Famine (1845–1852). This fact seems only to add to the mysterious atmosphere as well as the sanctity of the place:

“I know people who leveled them, you know. They died tragically afterwards. And I’m not saying it was a result of interfering with the fort. But, it might have had an input. You’re not supposed to interfere with them. That’s handed down from generation to generation, that you don’t touch them, or interfere with them.” 3

While carefully noting that it was not attributed to any malicious interference with the domain of the fairies, Connolly tells in the video (below, right) of his grandfather’s fatal fall at the entrance to the fairy fort. He also explains the gap in the stone wall in another field, never repaired after a detested landlord met his demise on the spot. 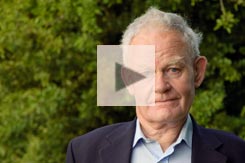 Early collectors of the nation’s folklore, such as Lady Wilde at the start of the 19th century (top of page) and Lady Gregory a couple of decades later, published a multitude of stories firmly documenting the folk traditions connecting the earthen raths to the realm of the fairies. In one, Gregory recounted the story of a Slieve Echtge man who was employed to build a wall near a rath. A stranger approached him and invited him to dinner atop the rath, where a sumptuous repast was laid out. The hungry workman “ate near two plates of it.” But when he returned to building the wall he became ill and began to vomit, “and what he vomited up was all green grass.”4

A story in a newspaper of 1841 tells of a man named Frank Thomas, living with his sickly child in his home built right against a rath called Tonagh Forthe (fort). Like the Fuerty Fairy Fort, this rath was once used as an unconsecrated burial ground. It was thought to be haunted. One evening the man thought he heard the noise of a saw cutting wood coming from inside the rath. But when he and his friends searched the area they could find nothing. So they sent for a man who was known for his ability to see the fairies:

“He was soon on the spot, and without a moment’s hesitation solved the enigma.
‘Tis the fairies’ said he. ‘I see them, and busy crathurs they are.’
‘But what are they sawing?’
‘They are making a child’s coffin,’ he replied; ‘they have the body already made, an’ they’re now nailin’ the lid together.'”
That night the sick child of Frank Thomas’ died, and when the carpenter was brought down to make the coffin and began his work, everyone observed that the noise was precisely the same as had been heard from the forthe the evening before—neither more nor less.” 5 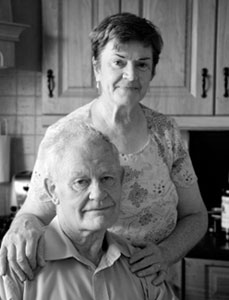 Liam and May Connolly

While the stories don’t always end in the death of the child, there is seldom a happy conclusion when a person is accused of being a “changeling,” one whose spirit has been maliciously replaced by that of a fairy, with the result that the body would grow sickly and die, and the real person would forever remain in the hands of the fairies. The Tipperary Constitution of April 10, 1840, reported on a court’s inquest after two men were accused of being complicit in the death of one John Mahoney, the young son of James Mahoney. It seems that the boy, six or seven years of age, had become suddenly ill and seemed near death. The two men who were arrested were accused of hastening his demise by forcefully demanding of him if he were “the real John Mahoney” and threatening to put him on a red-hot shovel if his response was not forthcoming. The boy, however, was likely comatose and unresponsive. Finally, “the mother took the child in her arms and laid him in the bed.” And his father told the men, “For God’s sakes, let him alone now.” The boy died shortly afterwards, but the court concluded that the accused men never laid a hand on him, and that he had been “in a very debilitated state” for some time. The inquest determined that the child “died by the visitation of God.”6

“Child Murder: Anna Roche, an old woman of very advanced age, was indicted for the murder of Michael Leahy, a young child, by drowning him…He was thought to be ‘fairy-struck’…Upon cross-examination, the witness said it was not done with intent to kill the child, but to cure it—to put the fairy out of it.” 7

But the most notorious story of a changeling may be the sad tale of Bridget Cleary, who was murdered by her husband Michael in 1895 after he became convinced that his 26-year-old wife had been abducted by the fairies, with a changeling left in her place. This became a scandal, with international implications, during the period when Ireland’s yearning for control of its own political destiny was being bitterly contested.

The Clearys lived with her elderly father in a home in Cloneen, Co. Tipperary, reportedly built on the site of an old fairy fort. The young Mrs. Cleary was being treated for a “nervous complaint” for some years before these events transpired. When she became bedridden with a bad cold, the local doctor diagnosed a “slight bronchial catarrh and the usual nervous excitement.” But the parish priest opined that she was suffering from “the beginnings of mental derangement.” The woman did not improve, and her husband became despondent over the inability of neither medical science nor his religion to bring a cure to his wife.

He soon became convinced that she was “too fine” for him and must have been substituted for a changeling. He believed that she had become “two inches taller than his real wife.” He consulted with folk healers who prescribed a particularly noxious treatment, and then used the threat of a hot poker to force her to swallow it.

“[Michael] Cleary walked about the house making charms and the sign of the cross before administering the herbs, which were boiled in milk from a saucepan. She cried out and screamed when forced to take the herb mixture. At intervals over a period of ten to twenty minutes a liquid concoction of water, urine and hen’s excrement was thrown upon the unfortunate Mrs. Cleary…While this was taking place [her father] and Michael Cleary questioned her. Her father asked her: ‘are you the daughter of Pat Boland? Answer in the name of the Father, Son and Holy Ghost.’ She answered, but they were not satisfied with the manner in which she did so. They shook her then, saying: ‘Away with you, Away with you. Come home Bridget Cleary, in the name of God.”’ 8 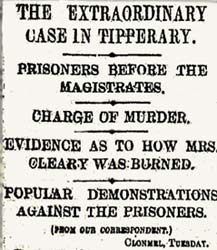 Ultimately the poor woman was unable to further respond to their questions. Her inquisitors then carried her from her bed down to the kitchen fire. She was too weak by that point to struggle as they held her over the fire in a desperate attempt to make her answer their questions. Her final words before she succumbed to the flames were reported to be, “Are you going to make a herring of me?”

The charges of willful murder against her husband were ultimately reduced to manslaughter, as the court concluded that her husband had no wish to see his wife dead, only to rid the unfortunate Bridget Cleary of the malevolent spirit they were convinced had replaced her.

In this excerpt from her poem “The Whithorn Bush,” Nuala Ní Dhomhnaill observes a fairy child stealing away from the kitchen of her temporary human home, escaping through the garden gate, and approaching the enchanted thorn tree:

The child stole out of the kitchen where all was spick and span,
down the stone steps scoured with Vim
and the dark corridor to the milking-room
with its skillets and cooling-pans.
…
A pair of kingfishers veered
from their holes in the sandy riverbank, while a blackbird
sounded an alert when she came too close for comfort.
On a hillock a single, solitary whitethorn flared.

Before this vision of visions the little elf
bowed her head and fell to her knees among the rushes:
no image of the Virgin hung above it, nor did it burn, like the bush
of Fatima or Sinai: it was wonder enough in itself. 9