“…a stylized head, a phallic symbol, a sacrificial altar and a piece of art representing the union of earth and sky. To the prehistorian, these stones are a classic case of a piece of jigsaw with no setting into which it can confidently be fitted.”

Ronald Hutton, The Pagan Religions of the Ancient British Isles, 19911

Drag to rotate the Castlestrange Stone. Touch here for the mobile version.

The glory of the Castlestrange Estate has long since turned to ruin.2 The elegant three-story country house, dating from the 1830s, is but a precarious shell, as are the coach house, stables, and gate lodge. However one remnant of the opulence of the estate still remains: the prehistoric La Tène decorated stone that was likely brought here to serve as an landscape feature at the estate’s entrance.3

Known as the Castlestrange Stone, this granite boulder displays the characteristic curvilinear ornamentation of Celtic flourishes called La Tène. These date from the Iron Age (c. 400 BCE – 100 CE), and were named for the site in Switzerland where such designs were first noted in artifacts found when lake levels dropped in 1857.4 The account of the discovery of the Castlestrange Stone wasn’t published until 1904:

“There are no remains near it with which it can be associated…No traditions are attached to it. I could learn nothing about it, save that it had been in its present position as long as the oldest people remembered.” 5

There are two other La Tène stones in Ireland that display the same Continental style the carver of the Castlestrange Stone may have been emulating. The Turoe Stone in Co. Galway is the best known of these, particularly because of its phallic shape and the beauty of its design, carved in relief (see photo, below right). It is now (2011) protected by a small shed which makes it difficult to view. The third stone is the broken-up Killycluggin Stone, its pieces now displayed in the Cavan County Museum.6 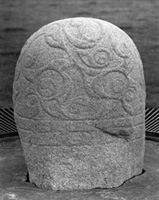 The Turoe Stone is near Loughrea in Co. Galway.

Each of this trio of La Tène stones has been referred to as a “cult stone,” since archaeologists and art historians have presumed that they were used in ritual observances whose forms and meanings have long been lost.

The Castlestrange Stone, 60 cm (23.6 in) high and 90 cm (35.4 in) long, with its design incised rather than carved in relief, may be seen from all angles using the rotating virtual-reality representation of the stone (above). Click on the image, and then when the new window opens, drag left or right to rotate the stone.

Kenneth Hurstone Jackson observed that the La Tène style greatly influenced the illuminations of early-Christian manuscripts such as the Book of Kells, where the same trumpet-pattern designs can be found in many of the colorful panels. Is it possible, he asks, that since the designs of the Castlestrange Stone ultimately found an expression in Christian manuscripts, that similarly the legendary tales of the Iron Age could have been repeated in the motifs of early-medieval literature?

“The [La Tène] motif must have passed in Ireland from pre-Christian to Christian art at a single leap in its full vigour…If so, it is surely also not so surprising that some of the literary tradition belonging to the Iron Age in Ireland should have lasted long enough to be adopted into the written literature of this very same early Christian period…” 7