Posted at 23:15h in Completed, Court and Wedge Tombs, featured by Howard
Share

“In styling rude stone monuments giants’ graves, the peasantry made the very pardonable mistake of confusing great men with big men; for there is a common and very prevalent idea that bigness constitutes greatness, and in vulgar minds wonder is proportioned in regard to the size of the object under notice…The size of some of the Irish rude stone monuments first gave rise to the idea that giants were buried in them. It is not, however, always the greatest men, either mentally or physically, that have the largest monuments erected over them…The rude stone monuments alone are gigantic, not the bones they contain.” 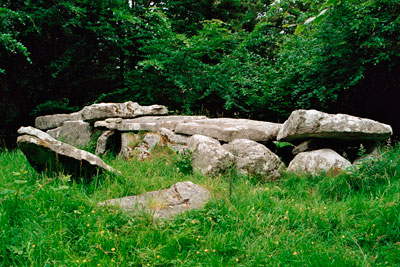 Many of Ireland’s megalithic monuments—portal tombs, court cairns, or wedge tombs such as this one—are known locally as “the giant’s grave.” But this one, on a hilltop in Co. Cavan’s Burren Forest Park, has a giant story to go along with its name. According to Harold Johnson, from the nearby town of Blacklion, the giant, attempting to impress a lady, failed in his final attempt to jump the nearby chasm, which is, of course, called “The Giant’s Leap.”
Harold Johnson relates this story in some detail, while seated on the Giant’s Grave, in the video, below right. Mr. Johnson also was our guide, and provided the narration, for our feature on the Killinagh Cursing Stones, located on the opposite side of the town of Blacklion.

The Burren Forest Giant’s Grave is 7.5 m (24.6 ft) long, with five large stones covering the gallery. The orthostats holding up these stones average about a meter (3.3 ft) in height. The two at the front lean together to create what resembles a triangular entrance to the portico.3 A septal (dividing) stone separates the gallery into a portico and a main chamber. A gap near the bottom of the septal stone may form a man-made aperture, perhaps intended to allow grave-goods to be introduced to the tomb. An outer wall once surrounded the tomb, bracing up its (lost) covering cairn, but most of these stones have fallen down or have been taken away to be re-purposed in local construction projects. In 1972 it was reported that the inside of the tomb was “littered with small stones,” that were identified as debris from the covering cairn, long removed in the ages prior to such monuments coming under state protection.4

Harold Johnston recounts the story of how the giant met his demise.

“And he jumped one way, and then he jumped the other way and he fell down and he broke his back. So they carried him up, and they buried him here, in what’s called the Giant’s Grave.” 2

An extraordinary feature on one of the large lintel stones covering this tomb are the small hemispherical depressions which some observers think may be cupmarks decorations created by the megalithic architects. These may be noted in the close-up photograph, below left, and also in Harold Johnson’s video interview. He was of the opinion that the cupmarks had a very specific meaning for the ancient tomb builders:

“That was just a mark of the place where the skulls are, and each time…the chief or whoever it was died, they put a mark in the stone. If it was an old man they made it deep, if he was a younger man they made it shallower.” 5

Cupmarks on the tomb.

The townland of Burren where this monument is located should not be confused with the better known area of the same name in Co. Clare, with its extensive limestone pavements covering the ground and colorful foliage sprouting up in the cracks between them. The word “burren” derives from the Irish an boireann, “stony place,” and is used in other Irish locations as well. The hilltop site of the Giant’s Tomb once offered an inspiring view across Lough Macnean Upper beyond to Lough Melvin and on to the northwest. But today a modern conifer forest surrounds it, limiting its perspective. In the same area as the Giant’s Tomb is another wedge tomb, as well as a portal tomb known as the Calf House.

Legends linking megalithic tombs with the remains of so-called giants may have originated in the Middle Ages with the discovery of large skeletons, some up to 9 m (30 ft) or more in length. We now presume that these were the bones of extinct species of animals, disarticulated and confused with human remains. Medieval authorities granted the possibility that there might once have been men who might have towered over others in height. In 1718 a biblically-based theory claimed that man’s original stature, as represented by Adam, was nearly 38 m (124 ft), but after that the species degenerated with a 8 m (27 ft) Noah, a 6 m (20 ft) Abraham, and a relatively miniature Moses, at only 4 m (13 ft) in height.6

A more rational, if quite racist, interpretation of the stories linking megalithic monuments with giants was provided in 1850 by Caesar Otway:

“This is the race that their more stupid but ferocious successors called Magicians and Giants, because they were more clever and civilised; and who could not understand how such religious and military works could be executed except by super-human intelligence and strength.” 7

In some locations on the Continent bones removed from megalithic monuments were presumed to be those of saints and were ceremoniously paraded through towns needing heavenly intercession during times of drought.8 In Ireland, St. Patrick himself was reputed to have an encounter with the bones of a Giant’s Grave. In the 9th century Tripartite Life of Saint Patrick there is an account of a long-deceased giant who emerged from his grave upon the saint’s exhortation:

“And Patrick came to Duchuil to a great grave, of astounding breadth and prodigious length which his familia had found. And with great amazement they marveled that it extended 120 feet, and they said, ‘we do not believe this affair, that there was a man of this length.’ And Patrick answered and said, ‘If you wish you shall see him,’ and they said, ‘we do.’ And he struck with his crozier a stone near its head and signed the grave with the sign of the cross, and said ‘Open, O Lord, the grave.’ And the holy man opened the earth and the giant arose whole and said, ‘Blessed be you, O holy man, for you have raised me even for one hour from many pains.’ Patrick baptized and confessed the giant, and returned him to his grave.” 9

A number of other monuments described in the Voices from the Dawn project have a legendary association with giants of one description or another. The Proleek Dolmen, in Co. Louth, is also called “The Giant’s Load,” and was said to mark the site of a battle between two giants. The World Heritage Site of the Giant’s Causeway along the north coast of Co. Antrim was in legend the pathway created so that Irish and Scottish giants might do battle. An early history contends that Merlin the Magician stole from Ireland the most renown of all megalithic monuments, Stonehenge. He subsequently reconstructed the monument stone-by-stone in England. This tale contends that Stonehenge, also known as the “Giants’ Dance,” was originally set up in Ireland by a race of giants from Africa. In Co. Down, the Ballynahatty Giant’s Ring is a vast ceremonial space with a passage tomb at its center.

Much of this nomenclature may be attributed to a self-perpetuating predilection to see the bones of giants within the excavations of prehistoric tombs. As W.G. Wood-Martin noted in 1902:

“Often, when opening a ‘Giant’s Grave,’ workmen have drawn attention to the great size of the human bones which they disinterred, when in reality the bones had formed the framework of a man of but medium stature. The minds of the searchers were imbued with the idea that the bones must of necessity be of superhuman size, for were they not found in a ‘Giant’s Grave?’…’There is no failing to which antiquarian observers seem more liable than seeing too much.'” 10