Posted at 14:21h in Portal Tombs by Howard
Share

“The element of daring embodied in the construction of a dolmen is nowhere displayed more finely than in the superb example at Ballymascanlon in the County of Louth. If the primitive type reminded the builders of a house, and by thinking backward of a cave, design has here progressed some way towards an artist’s dream of a cathedral.”

Drag within the image to explore the Proleek Dolmen and the gallery grave in virtual reality.

The Proleek Dolmen (portal tomb) and its neighboring wedge tomb may be unique in Ireland as the only pair of megalithic monuments likely to hide a golf ball hit into the rough. They are situated just off the sixth hole at the Ballymascanlon House Hotel golf course.2 A paved path leads to the monuments from the hotel’s parking area, but they can also be reached by a shorter footpath from outside the hotel grounds.

The outlandish size of the portal tomb’s nearly 40-ton capstone, its top four meters (13 feet) off the ground, may have been responsible for one of its traditional names, the “Giant’s Load.” Writing in 1897, William Borlase noted that,

“…on entering the field from the river side, it presents the exact picture of a man in grey, walking away from you, and stooping beneath the weight of a bulky sack of the same colour, which he bears on his shoulders.” 3 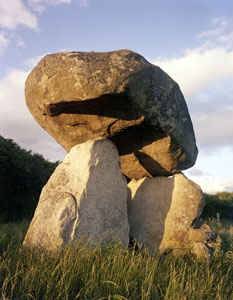 The Proleek Dolmen, dating from c. 3000 BCE, was used for interments in which the cremated remains were placed in the tomb, often accompanied by grave goods, including implements, beads and fragments of pottery. Some have theorized that the tomb may have been aligned so that its portal points toward Slieve Gullion and the setting sun of the summer solstice.4

In addition to the three natural pillar stones, the 3.8 x 3.2 meter (12.5 x 10.5 feet) capstone now has additional support provided by an unsightly bracing of stone and concrete. Just 91 meters (100 yards) to the SE is a wedge grave with a 6.7 meter (22 feet) gallery.5 The two monuments are twinned both in location and in legend.

The translation of the name of the monument is unclear, with linguists suggesting that it may be “the Death Stones,” or the “Dinner Stones.”6 These monuments are located on the fabled Cooley Peninsula, the site of some of the most spectacular battles of the legendary Cattle Raid of Cooley, known in Irish as the Táin Bó Cuailgne, or simply the Táin. A writer in 1908 described the dolmen as “the grave of some fallen chieftain from a battle in the Tain.”7 But local lore contributes a much more specific tale.

The story asserts that the dolmen was deposited here “by Fionn Mac Cumhaill and Para buidhe mór Mhac Seoidin,”8 and recounts the battle that then ensued between the two giants, one an invader from Scotland, the other the local hero. This battle resulted in the death of the foreigner, supposedly interred in the wedge grave. In fact, a 1758 report describes “several Bones of a monstrous Size they affirm to have been dug up here.”9

According to the Co. Louth Ordnance Survey Letters in 1836,

“They say it is the grave of Para buidhe mór Mhac Seoidin, a Scotch giant, who came to challenge Fin Mac Coole…Para buidhe mór asked Fin’s wife where he (Fin) used to eat, Fin, she told him, when he was hungry would kill one of those bullocks (pointing to them), roast him and eat him. Para went and did the same; the spot on which he killed, roasted, and ate the bullock, is pointed out yet…When he had eaten he went to the river which runs near the spot, to satisfy his thirst; but Fin threw poison into the river, by which means he dispatched him.” 10 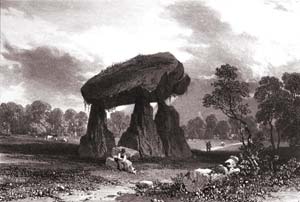 The other bit of folklore concerning the Proleek Dolmen, still honored by many of its scores of visitors each day, says that if you are successful in tossing three consecutive pebbles up to the top of the capstone, without any rolling off, you will get a wish. Another version of the legend states that whoever manages the feat will be married within the year.

The role of these pebbles in the folklore of this sepulchral monument may be a remnant of a ancient practice. In 1888 W. G. Wood-Martin recorded that such pebbles were often found in old tombs being excavated. He wrote that it was common for the workmen doing the digging, when coming upon such pebbles, to shout out, “Here are the two stones! — now we will get the bones.”12

The Proleek Dolmen holds a special place for us among the hundreds of ancient Irish monuments we’ve visited, as it was the first one we encountered. In April of 1968, while motorcycling around the east coast of Ireland during a holiday from our studies in England, we followed a signpost which led us to walk up a rough path through a field, across a stream and into a wood. It then opened up to a broad meadow, where the Proleek Dolmen appeared in front of us. It was still the dismal end of winter in Ireland, cold and wet.

“The small stones on the top of the Ballymascanlon cromlech near Dundalk, locally known a the “Pulleek Stone,” are thrown by the credulous, who believe that if one rests there the thrower will be married before the expiration of the year…” 11

So there was no one else around as we reached out and touched these stones, forging a link between ourselves and those who erected the monument five thousand years earlier. It was only after our next visit, a decade afterwards, that we discovered that the broad meadow at the end of the path was actually the fairway of the Ballymascanlon House Hotel.