Posted at 00:59h in Completed, Earthworks by Howard
Share

“In the centre of this space there is a Druid altar…Few things were more calculated to awe the mind and to affect the imagination than this scene, when we contemplate it as a vast heathen temple, within the circuit of which many thousands may have assembled to witness the awful rites of their sanguinary religion; and where no objects could attract their attention from the priest, the huge altar stone, the human sacrifices and the glorious luminary that formed the principal object of their adoration…[the sun].”

Drag within the image to explore the Ballynahatty Giant’s Ring in virtual reality.
Click the red hotspot to descend into the center of the henge.

Unique in the country for its central stone tomb, this monument is the largest enclosed ceremonial space in Ireland (see satellite view, below right). It consists of a ruined passage tomb, its cairn of stones removed, surrounded by an earthwork henge enclosing a circular space of 2.8 hectares (7 acres), 180 m (590 ft) in diameter. It is likely that the henge was built at the end of the Neolithic, or at the beginning of the Bronze Age, surrounding an earlier Neolithic passage tomb from the same or an ancestral cultural tradition.2The banks of the henge, composed of gravel and boulders, rise up to a height of 3.6 m (12 ft) in places. The henge was created from a wide excavation in the interior of the circle, making the enclosed space somewhat resemble an upturned saucer. The five gaps in the bank are an enigma, as it is unclear which (if any) are original and which may have been created for the convenience of land cultivation before the monument came under state care.3The top of the bank is flat, perhaps due to the original builder’s intention to create an audience platform for rituals enacted within, or perhaps more prosaically due to generations of Sunday strollers out for a jaunt in the fresh air. This may be an entirely appropriate Sunday activity for the Giant’s Ring; according to archaeologist Barrie Hartwell these monuments may be thought of as “…the churches of their day with the Giant’s Ring representing a regional, higher status site similar to a cathedral.4There may be a parallel in the site’s combination of henge and tomb with the monument known as the City of Shrone, in Co. Kerry, where a stone wall instead of an earthen bank surrounds what may be a megalithic tomb. There are also similarities to the massive Grange Stone Circle at Co. Limerick’s Lough Gur, sitting upon its raised, henge-like platform.5 Another factor about the Ballynahatty site, tying it to a ritual tradition in the country, may be its primary location within a larger prehistoric necropolis, a ceremonial site on a plateau above a loop in the river Lagan just as Newgrange, at the bend of the Boyne in Co. Meath, represents the most significant monument within its own necropolis.The significance of the Giant’s Ring, perhaps once holding a Bronze Age community enthralled with the ceremonial affirmation of its tribal identity, had by the 19th century devolved into a venue for sporting:

“The Ground about it is often used as a Race Course, round which the Horses run six times in each heat which makes two miles, and it is consequently judged to be a third of a Mile in circumference.” 6

Borlase, writing in 1897, seizes upon the earlier report of the monument’s use as a racecourse and suggested that such activity was the “survival of the fair, or celebration of funeral games, in which racing bore the principal part which once would have been held periodically in the ‘ring.'”7 As to the origin of the name “Giant’s Ring,” there is no legend regarding a giant specific to this monument. The size of many megalithic tombs, and the fact that the early antiquarians were unaware that these monuments contained the remains of multiple individuals, lead to the association with a long-departed race of giants. A 1715 report of an amateur excavation of a burial containing “large teeth” drew such a conclusion:

“The curiosity I have send your Lordship, is so far beyond any thing that I have ever had the honour to communicate…It may be well worth consideration what sort of creature this might be, whether human or animal…If human, it must be larger than any giant we read of…” 8

These particular skeletal remains were later assumed to be those of an elephant.

Other megalithic monuments, however, such as the Burren Forest Giant’s Grave in Co. Cavan, have very site-specific folklore of giants associated with them. 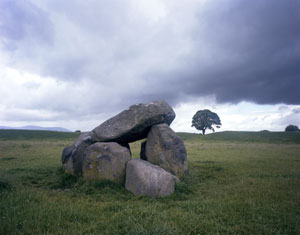 The ruined passage tomb of Ballynahatty, its covering cairn removed long before any account of the site was written, was in 1834 reported to consist of “two ranges of pillars, each consisting of seven, supported the great superincumbent rock; besides which there were several other stones fixed upright in the ground, at the distance of about four feet.”9 Remaining now is the denuded chamber of five uprights capped by a single massive stone.

Aerial photography during the dry summer of 1989 revealed evidence of two palisaded enclosures just north of the Giant’s Ring. These may be noted in our initial aerial VR view, also made in a dry summer (2018). Two nodes of the VR tour were made in the much wetter summer of 2000.

The modern excavator of the site, Barrie Hartwell, discovered there in 1990 the burnt evidence of a large oval enclosure, with a smaller circular timber structure within it (see illustration in gallery). He interpreted this site to be a part of the funerary ritual, where the bodies of the dead were left to decay—or be defleshed—prior to their entombment.

“In a ceremonial context, the participant is being induced to stop during his or her approach in order to observe these three views before continuing into the interior of [the palisaded enclosure]. The planked facade may have provided a support for various motifs and wicker panels may have blocked symbols and a view of the interior from other directions. Towering over the enclosure would have been the four main posts. The massive nature of these would have been an ideal support for carvings. The approach to this building was calculated to inspire awe.” 10

Interestingly, William Borlase in 1897 imagined such a wooden structure associated with the tomb:

“That such assemblies were connected with religious rites cannot be doubted, nor is it at all unlikely that the central space in the ring was occupied by a wooden temple abutting on the tomb, which latter was perhaps covered by a tumulus, in which dwelt the sidhe, or spirits of the dead, who were certainly worshipped by the ancient Irish.” 11

Among the other sites found in the immediate neighborhood of the Giant’s Ring was a buried stone burial chamber, discovered in 1855. While the site is gone today, one of the Carrowkeelware urns found there survives in the National Museum. The six inner compartments of the tomb (see illustration in gallery) contained burnt bone, perhaps divided into parcels, representing at least nine individuals. The evidence suggested the tomb was used on a number of occasions during both the Neolithic and the Bronze Ages.12

An 1890 description of the discovery of another tomb in the complex aptly illustrates how precarious were the prospects for these ancient monuments prior to their being taken into state care:

“Owing to the uncompromising exigencies of Mr. M’Connell’s farming operations, the monument was rather rudely handled, and intelligent local observers had not the opportunity of making that careful investigation they desired.” 13

Guide to Belfast: The Giant's Causeway, and the Adjoining Districts, William McComb, 1861

It is estimated that the construction of the Giant’s Ring required some 70,000-man hours.14 A visitor to the site, walking all around the tops of its massive henge, can today gain a visceral appreciation of the importance it must have had in the lives of its Bronze Age communities. The breathless 1854 description of sun worshipers and human sacrifices at the top of this page is one reaction to a visit to the site. However Barrie Hartwell’s sober but equally evocative quotation (below) is more reflective of the Giant’s Ring itself, unchanged as modern Belfast and its suburbs expanded to the edges of its green oasis.

“Death of the individual can be seen as ultimately affecting the survival of society as a whole. Mortuary rituals promote links between the changing present and what must have been perceived as society’s immutable past. Over time, however, the past becomes subject to reinterpretation and power becomes concentrated in those who are able to intercede between the living and their ancestors and to manipulate these links…Ballynahatty should therefore be seen as a focus of community ceremony and death rituals in the Late Neolithic and Early Bronze Age of the Lagan Valley.”


External Link:
The Prehistory of the Giant’s Ring