“They loosed their curse against the king;
They cursed him in his flesh and bones;
And daily in their mystic ring
They turn’d the maladictive stones.”

Drag within the image to explore the area of the Killinagh Cursing Stone in virtual reality.
The scene begins on top of “St. Brigid’s House. Hotspots will lead to the Cursing Stone and the church ruins.

The ruins of the church at Killinagh, with its adjacent holy well and ruined megalithic tomb, have long appeared to be a place with deep pre-Christian associations.2 This is nowhere more evident than at the large boulder close to the nearby shore of Lough MacNean, with the carved-out “bullauns” (hollows) on its top surface. In 1875, when William Wakeman was researching the site, he spoke with a woman from a local family with deep roots in the area. She reported that as a child “she was not unfrequently brought to the spot by an aged nurse, who there performed devotions of some kind.”3 She remembered that the woman called it the “Cursing Stone.” 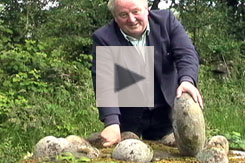 More than a century later, in 1998, it was clear that this old bullaun stone continued to be invoked for its “maledictive” powers. When we lifted the smooth, rounded “cursing stones,” under each of them there was a coin, placed there, no doubt, by the modern-day successors to the “aged nurse” of William Wakeman’s day.

As Harold Johnston, from nearby Blacklion, explains in the 1998 interview (below, left), “…if you wanted to put a curse on someone, you turned the stones anti-clockwise in the morning.” The power of the stones was such, however, that the person performing the malediction needed to be certain that the cause was a just one. Because if it was not, the curse “would rebound on yourself before night.”4

Wakeman heard an aged resident of the neighborhood say that it was the custom “when any of the neighbours had a grudge against a real or supposed enemy, and wished him harm, to proceed to the ‘altar’ and anathematize him…”5

Cursing stones, while clearly remnants of a pagan practice, are usually associated with Christian sites, such as those within the walled monastic enclosure at Inishmurray. Other such “turning stones” are known for their curative properties. Either way, these may be an example of the survival of a pre-Christian belief that continued until the Middle Ages.6 In an 1894 article in Folklore, G. H. Kinahan has a somewhat different description of the ritual at Killinagh:

“It is a large horizontal slab, with twelve or thirteen bullauns or basins cut in it, and in each bullaun, save one, there is a large round stone. The curser takes up one of the stones and places it in the empty basin-and so on, one after another, till all have been gone over. During the movement he is cursing his enemy, and if he removes all the stones without letting any one of them slip (no easy operation, on account of their form), his curses will have effect, but not otherwise. If he lets one slip, the curses will return on his own head.” 7

There are two smaller stones next to the large boulder. The three stones together have 16 bullauns of different sizes, ranging from 15 to 30 cm (6 to 12 in) in diameter. The largest is known as “St. Brigid’s Altar.” Between these and the ruined church is a holy well, dedicated to the same saint, likely a Christianized divinity known for her associations with water and fertility.8 The holy well also is in a state of ruination. While it may once have had a small building on it, it can now barely be located as an area of wet ground inside a nettle-filled copse. In the same field is a mound that has been described as a megalithic tomb. It is known as the “Queen’s Grave,” or as “St. Brigid’s House.”9 It is certainly tempting to think that these sites are all related in some fundamental way, aside from their geographic proximity. Was there a long-enduring folk memory of the person buried at the megalithic tomb? Did this influence the placement of the cursing stones and later the church and holy well, even though they might be separated by a thousand years from the tomb builders? All these related sites may be explored by using the hotspots in the virtual-reality environment (above, right). Bullaun stones are discussed in more detail on our page about the Kilmalkedar Keelers Stone. 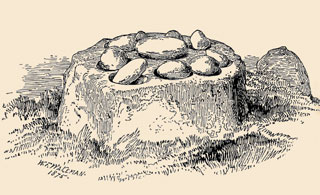 Some sources suggest that the rounded stones, now used as the cursing stones, were originally left by the early Christian missionaries as tokens of the faith for their newly-converted congregations. They were thought to embody the holiness of the saint and could affect different types of interaction with the divine, from healing to cursing.10

The Killinagh church, according to local tradition built in the early sixth century by saints Brigid and Laighne, may have been part of a monastic settlement. According to a 1939 journal article, the structure was built on an ancient pagan site that, aside from the cursing-stone and megalithic tomb evidence, was also the original location of a pagan idol known as Crom Cruaich, now located outside Belcoo in Co. Fermanagh. There was once a local belief that this anthropomorphic pillar stone was first situated next to the Killinagh cursing stones, until removed “to protect and conceal it from the zeal of Christian missionaries.” The pagan celebrations connected with Crom Cruaich were the source of the Domhnach Crom Dubh (Crom Dubh Sunday) events that were ultimately absorbed into the modern folk practices of Garland Sunday.11

One wall of the church presents further evidence that the whole area may have been built on a site that was sacred long before the coming of Christianity. There are two heart-shaped stones (see photograph above right) set into the north wall, just above ground level. The meaning of this pair of stones was considered in a 1939 journal article: 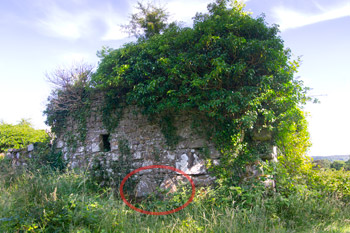 Click to see the two heart-shaped "pagan stones" that were inserted into the wall of the church at ground level. They are circled in red in the image here.

“I cannot think of any Christian significance that they may have had, and it is much more probable that they belonged to the pagan sanctuary, where they may have stood on either side of the cursing-stone used as altar, or have been idols…The early Christian did not believe in the non-existence of pagan divinities or demons; on the contrary, these were often powerful, and had either to be exorcised or constrained to Christian service. In the case of the Killinagh stones it seems that the magic power of a pagan deity had been tamed and Christianized to prevent it being lost or misused.”12

In 567 CE the Council of Tours mandated Christian officials “to expel from the Church all those whom they may see performing before certain stones things which have no relation with the ceremonies of the Church…” However it is clear that such pronouncements had the effect of absorbing some of these pagan practices into the church’s fold simply by the addition of an image of the Virgin or a relic of a saint. As anthropologist Walter Evans-Wentz put it, after the addition of the Christian iconography the people “beheld in the brilliant images new and more glorious dwelling-places for the spirits they and their fathers had so long venerated.”13 Perhaps this might explain the how these heart-shaped stones came to be set into the wall of the Killinagh church.

In more recent times, the belief in the powers of the Killinagh Cursing Stone extended even to a group of prisoners who were engaged in clearing bushes around the stones. As explained by Harold Johnston in 1998, once the convicts heard about the reputed powers of the stones, they began cursing “that District Justice that sentenced me, and that guard, that Sergeant of the Guards…”14