“Pagan survivals and reminiscences’, which are a universal feature of the Christian tradition, loom largest in the record of early Irish Christianity. Here, fragments of the pagan past ‘recombined in fantastic shapes around the persons of pagan heroes and Christian saints…have formed the nucleus round which mythological elements have gathered.”

Drag within the image to explore the Labbamolaga church ruins environment in virtual reality.

The 7th-century monastery founded in what is now Knockanevin by St. Molaga,2 which likely was of simple wooden construction, is long gone. Over the centuries it was replaced by various stone buildings, and finally at some point in the late medieval period by an unremarkable Romanesque parish church, lying in ruins since the 16th century. In the 15th-century Book of Lismore the church at Labbamolaga was noted as Eidhnen Molaga, “the Ivy covered Church of Molaga.” Surrounding the church and its graveyard is an ancient stone wall, and surrounding that, and extending across the road, are remnants of a larger field-wall enclosure, perhaps indicating the extent of the monastic property. This enclosure may be noted in the aerial photograph, below right.3

Adjacent to the Romanesque church foundations lie the ruins of a small oratory, its walls of red sandstone measuring some 4 m (13 ft) by 2.7 m (9 ft). It is known as Labbamolaga, the bed, or grave, of St. Molaga. Some scholars, however, suggest that this 7th-century saint was a mythical figure, a “fantastic shape” (see quote at top of page) crafted atop the remnants and reputation of the pagan god Lug.4 The building, with its projecting antae (side walls), features a unique doorway made of only three massive stones, seemingly megalithic in character. While local lore assigns it to the 7th century, the oratory more likely dates from the 9th or even the 10th century.5

A mere 78 m (85 yds) separate this crumbling stone oratory on Lismalanny Hill from an alignment of four standing stones in the field below known as Parc a Liagain, “Swardy (grassy) Field of the Pillar Stones.” These pillars may once have been part of a circle of as many as eight such stones. Curiously, this stone alignment was also known locally as “Leabba Molaga.” 6 Some have suggested that the missing stones may be seen today in the “almost megalithic” entranceway to the Labbamolaga Oratory.7 The church and megalith proximity, considered along with the adjacent holy well and the Bronze Age burial urns discovered nearby, suggests that the site has maintained a spiritual significance for the locality for more than 4,000 years. 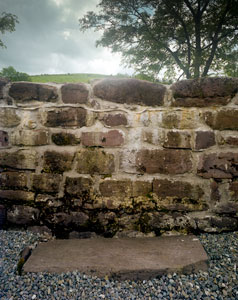 Click to see the “Saint’s Bed” stone in high resolution.

The Labbamolaga Oratory was not built as a church meant for regular worship. Rather it was constructed as a monumental grave at some point after the death of the monastery’s founder, a date not recorded in any ecclesiastic history. The structure has been described as “much ruined and much restored.”8 The formerly crumbling walls of the oratory may be seen in a sketch in the gallery below. The mortal remains of the saint are said to rest under a horizontal slab set against one wall of the oratory, a slab on which a faintly visible volute carving suggests that someone of significance lies beneath.9 The slab, and its volute carving, may be explored in the virtual-reality tour.

The stone alignment was reduced, before 1852, to the four pillars seen today. John Windele recounted how he was informed by the peasantry that there were formerly eight stones at the site, perhaps forming a circle. If so, the two northernmost stones may have served as a ceremonial entrance, as they are set with their widths parallel and are 2 m (6.5 ft) apart.10 One of these is broken, with its upper part resting against the sad stump of the pillar. The possible entryway and the broken stone may best be noted in the single-node VR view (below, left) which shows the stones with the swardy field freshly mown.

In a local legend, perhaps adapted at some point to suit the broken stone, a plaque at the site says that the standing stones were once four thieves who tried to flee after stealing some treasure from the church on the hill above. Molaga saw them trying to escape and in an instant turned them to stone. The small (broken?) stone is said to be the thief who knelt down to re-pack his booty after some had fallen to the ground.

St. Molaga and Lug Lámhfhada
In his hagiography we learn that St. Molaga (aka Laicin/Laichen) came from a humble Fermoy couple, who brought him into the world long after they were of normal childbearing age. His unlikely and miraculous birth, and his future holiness, were said to be foretold by St. Cuimmine. Molaga founded monasteries at a number of locations, and his followers grew as he visited Ulster, Scotland, and Wales.11

The first to suggest that St. Molaga was a Christianization of the pagan god Lug was William Borlase, who wrote in 1897 of the decorated stone in the oratory:

Although this stone is known from the Christian era as the cover slab of the grave of St. Molaga, it probably predates the saint by many centuries. Its ‘Mo’ is an ancient prefix of veneration and ‘Logha’ stands for the divinity ‘Lug,’’ the Tuatha de Danann hero, the slayer of the grandfather Balor.12

Writing 70 years after Borlase, and with the presentation of a body of etymological evidence, Pádraig Ó Riain suggests that “the case for the ultimate identity of Saints Molua, Molacca and Lachtene among themselves and with the pagan deity Lug may be allowed to rest.” Citing both the similarity of names and the coincidence of the festival of Lug (Lughnasa, August 1) with the feast day of the St. Lachtene (Molocca), he concludes:

The god survived under modified, but nonetheless homonymous, forms of his name. Thus, to take the three Christian expressions of his cult…Lug became Lugaid al. Molua, Lóchéne al. Molacca and Lachtene al. Molachtócc…
…the cluster as a whole must be a classic example of a ‘conglomeration of the names of a mythical personage.’13

Whether the locus of a saint, a pagan god, or some hybrid, during the Early Christian era in mid-Munster there was a “considerable cult” centered at Labbamolaga.14 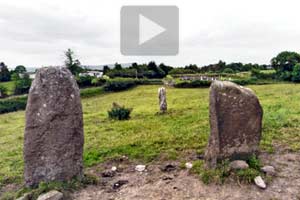 On another visit, the stone alignment was cleared of vegetation. Click to view in virtual reality.

In an oft-quoted letter written by Pope Gregory in 601 to one of his bishops about to set off for the newly converted British Isles, the Pope is extremely politic with his strategy for dealing with the recently pagan faithful:

…that the idol temples of that race should by no means be destroyed, but only the idols in them. For if the shrines are well built, it is essential that they should be changed from the worship of devils to the service of the true God. When this people see that their shrines are not destroyed they will be able to banish error from their hearts and be more ready to come to the places they are familiar with, but now recognizing and worshipping the true God.15

A frequently noted Irish legend has this or that pagan king instantly converted to Christianity on hearing of Christ’s crucifixion. This seems reasonable enough, as one could imagine the pagan peasant finding some comfort in believing that the god-heroes of his patrimony were not destined to spend an eternity in Hell, but instead allowed to join him in the new faith of the land.16 The line between the early saint and late pagan Druid may have been a very fine one indeed, as there was “the same belief in the irresistible power of formula, in the irrevocable nature of the oath, in the efficacy of symbol and spell.”17

One of the epithets of the hero-god Lug (or Lugh) was Lug Lámhfhada, or “Lug of the Long Arm,” for his skill with the spear. Lugh (the “shining one”) was thought to be the king of the mythological Irish progenitor race, the Tuatha Dé Danann. He was also thought to be the immortal father of Cu Chulainn, and even the personification of the land of Ireland.18 Was the origin of the mythological Lug a historical personage, an ancient clan leader of heroic proportions? Was he similar to Cu Chulainn, a hero who never entirely faded from human memory? Most folklorists would not subscribe to this theory. However in Hubert Butler’s formulation,

Becoming a god or a saint was a routine metamorphosis which, I believe, every tribal ancestor had to face when he lost his tribe… We have to grope behind the phantoms, the saint, the hero, the ancestor, for the reality, the ancient tribe that once lived here.19

St. Molaga’s Bed
The slab with the volute carving, supposed to mark the mortal remains of the saint, lies next to the south wall of the oratory. The 1.5 m (5 ft) long and half a meter (1.67 ft) wide stone formerly sat atop a depression in the earth with an opening at one side. This allowed the pilgrim seeking a cure to wriggle into the moist earth beneath, and using the stone as his hard and cold blanket, absorb the medicinal powers of St. Molaga. While the stone is now on a flat gravel surface, its former placement may be noted from the 1905 photograph in the gallery below, and was described by Windele in 1852:

Pilgrims affected with rheumatism and other complaints creep in under this stone and derive wonderful benefit from the act. ‘If,’ said one of the bystanders, ‘your back was bursting in two halves with pain, you could come out of that bed cured. I’ve seen cripples come here upon crutches who have come out of the bed jumping and throwing away their crutches for ever more.’20

Windele also reported the “common story” of St. Molaga’s Bed having underneath it a “beautiful well of pure, clear water.” But this vanished when an old woman used it to wash her dirty laundry. Borlase asserted that the stone was at one time used as a “swearing stone,” where agreements might be sealed and oaths made that, with the power of the stone, could not be broken. Windele recounted the story of a dishonest weaver accused of stealing spools of thread, who swore on the power of St. Molaga’s Bed that the spools were his own. “As soon as the dishonest words had left his lips all the stolen spools turned to stone.”21 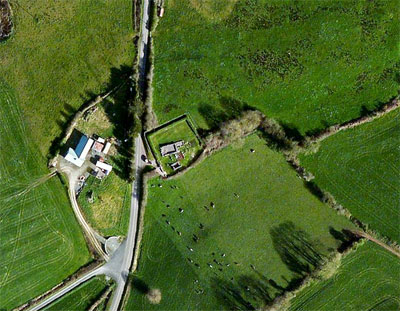 This aerial view (Bing) shows the Labbamolaga monastic enclosure and the stone alignment in the field to the south. Click on the image to see the features delineated.

These very spools are today known as the “cursing stones (Clocha Molochta), now secreted under a slab elsewhere in the graveyard (see gallery below). According to a plaque at the site, their magical powers could be invoked by repeating a formulaic curse while rotating the stones counter-clockwise. Stones with such reputed powers are found elsewhere Ireland, paradoxically usually associated with churchyards, such as the bullaun with cursing stones at Kilinagh Church, in Co. Cavan.
Late in the 19th century a well-meaning detachment of British soldiers, along with masons and workers, appeared at the crumbling Labbamolaga ruins, hoping to endear themselves to the locals by working to clean up the jumbled stones at the site and restore the walls. The people of the neighborhood, however, feared that the soldiers intended instead to destroy the holy site. The military and the masons, faced with angry crowds, were forced to retreat. It would be another 80 years before the church ruins were to be stabilized and the walls restored by the Irish Government.22 Is it possible that the Labbamolaga Oratory’s entranceway was at one time repaired using the upright megaliths appropriated from the prehistoric stone alignment? If so, this may have been a classic example of robbing pagan to pay Paul, and would symbolically reflect the cultural shift that created the Christian St. Molaga from the nucleus of the pagan god Lug.