Posted at 09:27h in Completed, Earthworks, featured by Howard
Share

“He further tooke this order infringeble, that whensoeuer he made any…inrode, into the enemies Countrey, he killed manne, woman, and child, and spoiled, wasted, and burned, by the grounde all that he might: leauyng nothyng of the enemies in saffetie, whiche he could possiblie waste, or consume.”

“Smerwick sowed with the mouthing corpses
Of six hundred papists, ‘as gallant and good
Personages as ever were beheld.’”

Drag within the image to view Dún An Óir in virtual reality.
There are three different VR nodes, plus a fort diagram overlay option.
Touch here for the HMD version.

There is today little left to see at the Ard na Caithne (Smerwick) headland known as Dún An Óir. Scant evidence remains of the original Iron Age fort occupying this spot. The earthworks—remnants of the hastily constructed 1580 fortification—have become eroded by weather and the waves until only a barely-recognizable outer bank and two bastions (bulwarks) are to be noted by the visitor. The bank is 25.6 m (84 ft) long, with one bastion projecting 1.5 m (5 ft) and the other one 5.8 m (19 ft). Only a treacherous narrow path, where once there was a drawbridge, connects to the inner part of the fort. This off-limits route has a 15-meter (50-foot) drop to the sea on each side.3 In the virtual-reality environment you may see both the earthworks and the waters of the bay below by rotating the view. However, you will see no evidence of the November day centuries ago when 600 prisoners of war were lined up here and put to the sword.

The translated (Spanish) name for this headland, “Fort del Oro,” (Fortress of the Gold) stems from the fact that a ship holding what was thought to be “black gold” foundered in the bay here two years before the fort was built. In September of 1578 a vessel with 110 tons of “golden eyore” [ore] entered Smerwick Harbor after barely surviving the storms of the Canadian Arctic. The explorers aboard came back with botanic samples, an Eskimo (who didn’t survive the voyage) and the ore, which turned out to be worthless iron pyrite (fool’s gold). In later years, rumors that the “black gold” was used in the construction of the fort may explain why trenches were gouged out of some of the embankments: prospectors were trying to make the fort into a gold mine.4 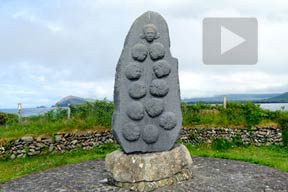 The Dún An Óir memorial by Clíodhna Cussen.

In 1969 gold-seekers of a different kind were at work with their metal detectors at the base of the cliffs at Dún An Óir. The items they found, all confiscated by the government, included four fragments of a bronze gun.5 This likely belonged to the force of 600 besieged Irishmen and their foreign supporters who all died here on the 11th of November in 1580 in what was to become known as the Massacre of Smerwick. This ignominious moment in the history of Anglo-Irish relations is commemorated in the sculpture (see panoramic view to the right), located in the nearby field called Gort na gCeann, “The Field of the Heads.”

On the 10th of September in 1580, the mendacious and inept Italian captain Sebastiano di San Giuseppe sailed into Smerwick harbor with his force of 600 Italian, Spanish, and Basque troops, recruited with funds supplied by Pope Gregory. These forces, “fine, handsome men, but the scum of Italy,”6 were attempting to come to the aid of the Second Desmond Rebellion, one of many efforts by the native Irish to counter the continued expropriation of their lands and the replacement of their traditional domination of Munster by the Elizabethan English.7

At first this ragtag band of foreigners enjoyed their control of this little slice of Ireland; they even hanged a few of the English messengers sent to meet them.8 But soon many became ill from the unfamiliar food and the climate, as the weeks progressed into the start of Ireland’s season of wet, dark, and cold. They waited for the anticipated thousands of Irish reinforcements, of whom only 17 were to join up with them.

General Arthur Grey, Baron de Wilton, the Lord Deputy of Ireland, was sent by Queen Elizabeth with a force of 6,000, to quell the Second Desmond Rebellion. His first battle, in August of 1580, ended in an embarrassing defeat for Grey with the loss of 800 of his men at the Battle of Glenmalure (Co. Wicklow).9 In October of that year he was about to avenge his losses as he surrounded the Catholic forces at Dún An Óir.

Grey’s troops, 4,000 in number, laid siege to the invading foreigners and their Irish allies at their sparsely fortified headland. There, at the tip of the Dingle Peninsula, there was no escape for the Catholic forces, with a mountain blocking them behind Grey’s army, and the guns of three British ships under the command of Richard Bingham pounding them from the sea.10 After three days of a one-sided battle, “at last they hoisted a sheet, with cries of Misericordia [mercy], and craved a parley.”11 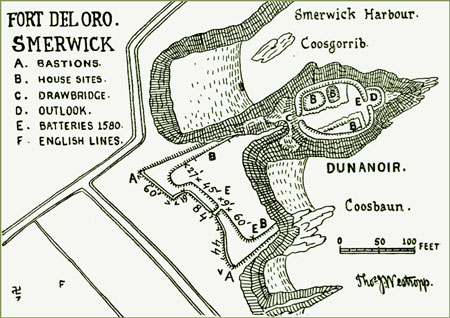 The Plan of Dún An Óir. (Westropp, Thomas J. “Promontory Forts and Similar Structures in the County Kerry.” The Journal of the Royal Society of Antiquaries of Ireland, Fifth 40.3 (1910): 201.)

Click on T.J. Westropp’s 1910 plan of the remains of Dún An Óir (left) to see an animation of it superimposed upon an aerial photograph of the fort.

On November 9th, di San Giuseppe attempted to bargain with Grey—the Italian wanted to keep for himself a good share of the treasure in the fortress12 —by turning over to Grey those of his local allies whom he felt might be of most value for the Englishman. Father Laurence Moore, Dr. Oliver Plunkett, and William Walsh were interrogated by Lord Grey. After they refused to acknowledge the religious supremacy of the Queen, Grey ordered them taken to his blacksmith to have all the bones of their hands and feet broken with mallets. The priest, because his hands had touched the Sacrament of the Eucharist, also had his thumbs and forefingers cut off. On the evening of the 10th, after a night and a day of agony, they were all hanged, then ripped apart by Grey’s marksmen who used them for target practice.13

What happened next has been disputed by generations of historians, whose interpretation of the events is dependent upon whether they are viewed from an Irish or an English perspective. One side has maintained that Grey accepted the unconditional surrender of the invading force and told them “”that they should render the fort to me and yield their selves to my will for life or death.”14

The other side insists that there is “…high authority for the statement, that the defenders, before they surrendered the Fort, were promised their lives.15 There is no argument, however, regarding what happened afterwards, on the morning of the 11th of November. As Grey prosaically described it in his report to the Queen:

“The [Spanish] Colonel came forth with ten or twelve of his chief gentlemen, trailing their ensigns rolled up, and presented them to me with their lives and the fort. I sent straight certain gentlemen in, to see their weapons and armours laid down and to guard the munition and victual there left from spoil. Then put I in certain bands who straightway fell to execution. There were six hundred slayne…So hath it pleased the Lord of hostes to deliver your enemies into [your] Highness’ handes.” 16 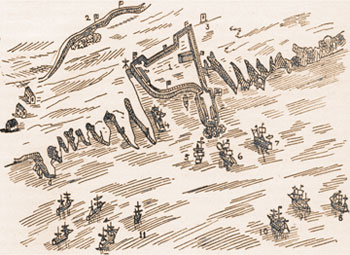 Only 13 of the men, believed likely to be ransomed, were spared the sword. Local tradition maintains that the prisoners, including pregnant women, were lined up in a nearby field, now known as Gort a Ghearradh (the Field of the Cutting). Then they were decapitated, one by one, with their corpses tossed into the ocean and their heads buried in the adjacent field where the monument stands today.17

As many have argued in the centuries since, the atrocities committed that day at Dún An Óir were not unusual for the Elizabethan era, where, as the quotation at the top of this page asserts, the accepted tactic of war was “leauyng nothyng of the enemies in saffetie.” While today we would label such an incident a “war crime, in 1580 it would be another 370 years before the Geneva Convention. 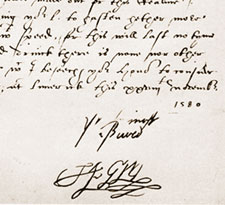 One apologist for Grey was the poet Edmund Spenser, who was present at the battle as Grey’s secretary. It is likely that some of the words attributed to Grey were actually composed by Spenser. A Veue of the Present State of Ireland, a metaphorical tract written by Spenser in 1596 and posthumously published in 163318 endorses such brutal terror tactics for the pacification of Ireland as were demonstrated by Lord Grey at Dún An Óir.

It may be that the Smerwick Massacre achieved the infamy that it did chiefly because most of its victims were foreigners. Ultimately the event was, in some accounts, responsible for Lord Grey’s recall from Ireland in disgrace, and the “stigma on his honour symbolized by the use of the phrase ‘Grey’s Faith’…” which came to mean deceitful or treacherous.19 Conversely, as a modern historian insists, it is also possible that Grey’s tenure in Ireland was ended only because of his mismanagement of his financial affairs.20 A pamphlet published the year after the event actually jokes about the massacre, and describes the English soldiers taking the garments off the beheaded foreigners and clothing themselves aI modo Italiano.21
An event of this magnitude would be expected to engender a body of local folklore. In fact, aside from the legends concerning the lost gold, and the different stories about who was or was not present at the massacre,22 only recently have some tales developed that evoke the memories of Dún An Óir. A 2004 story in London’s Sunday Times, with the lurid headline “Massacre Victims from Raleigh’s Time Return to Haunt Irish Shore,” describes a grisly (and impossible) scene:

“…At least once a month, a skeleton is left exposed after high tide on an eerie, windswept beach in Co Kerry known in Gaelic as “Dark Corner”…Some of the skeletons are intact but others, say those who find them, are headless. After one recent storm a local farmer claimed to have seen three skeletons floating out to sea, while another man said that he counted twelve heads bobbing in the water…” 23

A month earlier, a blogger on tripadvisor.com in a post entitled “Was it Blarney or not?” recounts how at the Dingle tourist information center she was told a story similar to the one in the Times. “Although it was fun and exciting to think we might ‘see something,’ I have to admit that we got taken by the ‘blarney,’” she wrote. Could her conversation at the tourist center in Dingle have marked the beginning of a new folkloric tradition for Dún An Óir?24

There is no folklore, however imaginative and grisly, that could do justice to the atrocities that occurred in this spot long ago. A year and a half after the massacre one of Grey’s captains, Humphrey Macworth, known as the most avid of the executioners at Dún An Óir, was captured by a band of Irish rebels. After a considerable amount of preliminary torture, he was flayed alive.25