Posted at 15:19h in Completed, Stone Circles by Howard
Share

“There are fear-gorta or ‘hungry man’ stones, upon which, if you unwittingly tread, or touch in any way you are instantly seized with an unappeasable hunger which is fatal if not at once satisfied. Should you climb the mountains with a peasant, and finding some particularly green and sheltered spot, propose to rest, he will appear frightened, make some excuse, hurry you away and conduct you to another place. He will then inform you that the first locality was covered with ‘hungry grass,’ and that staying there would have been fatal to both.”

Drag within the image to see a panoramic view of the Dooncarton Stone Circle.

During our 1980 visit to the Dooncarton Stone Circle an older gentleman in the locality, Seán Burke, invited us into his home. Over several shots2 of the local poitín he spoke of his own experience with the fear-gorta near the stone circle. He was walking late at night in a boggy area nearby he said, when he felt “a great despondency come over him.” His body grew weak, and he realized that it was the fear-gorta and he knew that he must eat something, anything, to break the spell. He hurriedly drank some soup, and the ill feelings began to dissipate.3

There are seven stones remaining in this incomplete stone circle just outside the village of Dooncarton. The tallest of them is some 1.2 m (4 ft) high. The stones are in a complex of ancient field walls, on a ridgeline affording a dramatic view overlooking Broadhaven Bay and the Cliffs of Rinroe Point at the opposite headland. The Rosdoagh Court Tomb has a similar postcard-worthy view over the Broadhaven shore, a mile or so to the east. The high-resolution photograph (below, right) was made with a large-format view camera. Click the photo, and then click the button at the right of the Zoomify toolbar to see it full-screen. 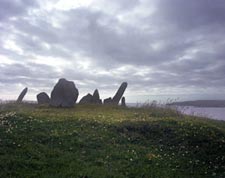 The townland of Dooncarton, which is also known as Glengad, is said to have been named in Irish Dún Ceartáin after a legendary tribal leader named Ciortan.4 The area has achieved some modern renown not for its archaeology or its legends but because of the destruction caused by some 40 separate landslides that hit the area on the 19th of September in 2003. There is also the ongoing conflict between local environmental concerns and the desire of Royal Dutch Shell to construct a gas pipeline into this pretty bay.5

The potential assault on the antiquities of the area by Royal Dutch Shell are only the latest in what may be termed a sorry tradition of disregard for the monuments above Broadhaven. In 1850 Rev. Caesar Otway described how his companions tricked some locals into uprooting all the stones of the Dooncarton Circle in a chimerical search for silver coins.

“Some days previous to our visiting this place, they happened to pass it by on some sporting excursion, and learning from some one how a neighbour had dreamt that there was money under these stones, they, out of fun, set to throw down one of them; and when, after more labour than they bargained for, and not without the angry and scowling looks of the people, they had uprooted one of them, they hastily picked up, and as it were with great anxiety, some silver pieces, a shilling and sixpences, which they had contrived previous to cast in; of course they made a mystery of what they got, both as to the quantity and quality, and made haste to leave the place. And now on their return it was perceived that every stone composing the circle had been rooted up, although there appeared such repugnance to the gentlemen moving them; but if overturned, as they evidently were, care was also taken to set them up again in their former position.” 6