Posted at 08:22h in Completed, Court and Wedge Tombs by Howard
Share

“A local person said that he saw lights coming from within the tomb…The only explanation he could offer was that it was the ‘little people’…This is their property here, you see. It wasn’t excavated at that time, now. It was all covered over in trees. So it was much more sinister looking at that time than it is now.”

Drag within the image to explore the Creevykeel Court Tomb in virtual reality.
Click the red hotspots to explore all five views. Touch here for the HMD version.

No longer “sinister looking,” the Creevykeel Court Tomb today offers little in the way of evocative atmosphere. Its accessibility, cheek-by-jowl to the main Sligo-Bundoran road, allows a convenient—and brief—stop for tourists of all levels of antiquarian interest or disinterest. It is difficult to miss due to its proximity to the traffic; it is also difficult for the visitor to escape the traffic noise and imagine what this scene may have been like a hundred years ago, or a thousand, when its powers were evoked to give sanctity to a smithy’s forge.

The Irish name for the site was Caisleán Bhaoisgin, which may have meant “Castle of Enchantment.”2 When first catalogued in 1909, the immense stone pile, wildly overgrown, was recorded as “Giant’s Graves,” and described as

When the monument was excavated and reconstructed in 1935 by H. O’Neill Hencken and the Fourth Harvard Archaeological Expedition in Ireland, the archaeologist recorded local folklore from elderly men in the vicinity. One 80-year-old man told Hencken that the (then fallen) lintel stone once stood “erect on one edge” on its supporting stones. Another informant said that, “The prophecy of the stone…[was that] it would be thrown down by three brothers of the one name.” 4 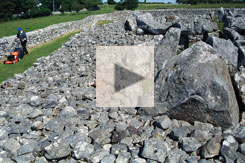 Hencken confirmed that around 1905 three brothers did indeed topple the lintel stone. Martin Byrne has noted that the local lore about the lintel stone’s former orientation seems to be accurate. Compare Anthony Weir’s modern photograph of the stone to the 1880 drawing by William Wakeman (see images below, right).5

The high-resolution photograph (below) was made with a large-format view camera in 1979. Click the photo, and then click the button at the right of the Zoomify toolbar to see it full-screen. 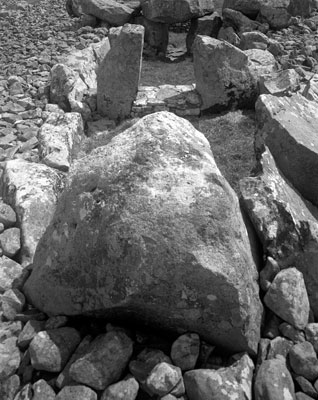 Creevykeel, made tidy by its reconstruction, is known as “one of the finest court tombs in the country.” However it is also a complex multi-epoch and multi-purpose structure, its earliest parts dating from the Late Neolithic (c. 2500 BCE) while other elements were modified or added during the Early Christian Period. Carleton Jones hypothesized that its alteration over time, from a simple structure to a more complex monument with an enclosed forecourt, could reflect a changing social dynamic in which ancestral burial and worship ceremonies once witnessed by the whole tribe evolved into rituals enacted primarily by a priest cult.6 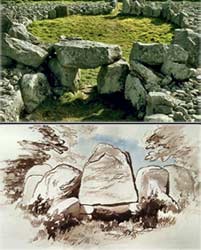 Note the lintel’s position after the 1935 reconstruction as compared to how it was drawn by Wakeman in 1880.

Its wedge-shaped cairn was originally some 55 m (180 ft) in length, and 25 m (82 ft) wide at the entrance to its large, 15 m (49 ft) oval court. At the western end of the court, two large jamb stones supporting the massive lintel form a portal to the first of two burial galleries, labeled C1 and C2 in the VR tour and in Hencken’s 1939 plan reproduced below left, both once covered with corbel-constructed cairns.
West of the galleries are three subsidiary tombs, each opening to the exterior of the larger structure, two to the south and one to the north. These also were once covered by the cairn and were roughly contemporary with it. The two large burial chambers of the main gallery revealed evidence of four groups of cremated bones. But only pottery, quartz crystals and a stone bead were found in the smaller chambers. 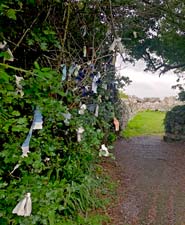 “Rag trees” at the entrance to Creevykeel.

Perhaps the most intriguing aspect of Creevykeel is the Early Christian construction found in the northwestern part of the court, built when the original Late Neolithic – Early Bronze Age cairn was long derelict. This may be noted within two view of the VR tour. There, and in the three hearths at that end of the court, remnants of a primitive metal foundry point to the belief that ancient metal workers were endowed with magical powers. In some cases, votive metal objects have been found in wedge tombs. But here placing a metal foundry entirely within the tomb directly evoked the spiritual powers within the Creevykeel tomb. As the excavator put it, “…in early Ireland the smelter-smith, and perhaps other people endowed with special powers, made a practice of occupying such abandoned tombs.”7

A Carleton Jones explained, “Many of the techniques of the early metal workers were probably shrouded in secrecy and it is quite possible that even the metal smiths themselves thought that there was an element of magic involved in turning the stony ore into a finished, shiny metal object.” 8

Creevykeel may have had an even later re-purposing when it was in the 19th century, according to local lore, the site of a number of “still-houses” hidden among the ruins of the cairn.

“One day fifty mounted men set out from Sligo to capture the poitín-makers and their still. But while they were on their way, a white hare appeared on a stone wall beside the cairn, and the owners of the still decided to follow it. It led them to within sight of the mounted men, and the poitín-makers, realizing their danger, rushed back to the cairn to save their still. Thereafter the white hare always appeared to them whenever the authorities attempted a capture, and due to these warnings the still was never seized.” 10

Click to see the excavation plan in detail. Specific parts of the tomb are similarly annotated in the VR tour at the top of the page. (H. Hencken, 1939.)

The sense of magic may have remained—and been revived—in the modern era, as evidenced by the “rag trees” (see photo above left) at the entrance to the site. When excavated the chamber revealed the bones of at least two human fetuses, along with a cat skeleton.9 Other tombs in the Voices from the Dawn Project have provided evidence of their redeployment hundreds—or thousands— of years after their initial construction. The Calf House portal tomb in Co. Cavan was refitted as an animal shed. At Lough Gur in Co. Limerick the wedge tomb was for many years the residence of a pitiable old woman. And at Co. Armagh’s Slieve Gullion, foxholes were dug into the two cairns during during World War II training exercises.

Creevykeel is a large site, with no earth-bound vantage point offering a view of the whole. Therefore it is difficult to gain an appreciation of its size and complexity. Only an aerial viewpoint , such as that presented in our virtual-reality environment (top), can really do it justice. Tightly surrounded by its enclosing wall, there is not the space required to isolate it from its modern surroundings. Yet it is clear that it was once the most important ritual site at an ancient crossroads where other megalithic tombs (now vanished) were once located.11

At Creevykeel
the sun shines,
a cuckoo spreads its charms;
limpid blobs of dew
bind newly-minted grass
on the early-morning farms.
We follow a plot of death
but not to keen or whine
at this ancient ‘giant’s grave’
where only the cuckoo stirs
and the sun shines.
Death is an obsolete rite,
a burnt-out prehistoric bone,
as remote to us who stray here
— fresh from bed and breakfast —
as this cairn of skeletal stone.
The cuckoo chants.
Lambs bounce on springy feet.
The first fly of the year
sweeps through a cottage window.
The day is gathering heat
at Creevykeel.