Posted at 07:23h in Completed, Earthworks, featured by Howard
Share

“It is not right, the people say, to sing or whistle at night that old air ‘The Pretty Girl Milking her Cow,’ for it is a fairy tune and the fairies will not suffer a mortal to sing their music while they are dancing on the grass. But if a person sleeps on the rath, the music will enter into his soul and when he awakens he may sing the air he has heard in his dreams. In this way, the bards learned their songs. And they were skilled musicians, and touched the harp with a master hand so that the fairies often gathered round to listen, though invisible to mortal eyes.” 1

Drag within the image to explore Tara Fort in virtual reality. 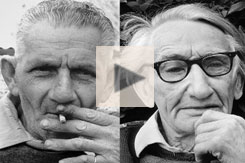 In a 1979 recording Thomas McKeating claimed that “these fairies were supposed to be seen sittin’ underneath a tree, singin’ and playin’ their music…They’ve seen the wee fairies. Up there in Tara Fort.” (See video at right).

This rath (earthen fort), and many others like it throughout Ireland, are (or were) thought to be “fairy forts,” inhabited and protected by “the gentry.” Our pages on the fairy forts at Fuerty and Ardnamagh offer further information.

This example, with its extensive views to Millin Bay and the Irish Sea, has not been excavated. However Ballyfounder Rath, 1.2km (.75mi) to the north-east, was excavated in 1955 (see illustrations in gallery below) and D.M. Waterman found evidence of two distinct phases of occupation. The first was c. 700 CE, when the fort was built as a domestic enclosure containing a circular hut with a hearth and cooking pit. After a long period of abandonment Ballyfounder was again occupied in the 13th century, when a small timber-framed rectangular building was constructed within. It is possible that its neighbor, Tara Fort, would reveal similar results upon excavation3

The legend of fairy music, which some have claimed to hear at Tara Fort, is widespread in Ireland. Some of the great musicians, it has been asserted, have composed their tunes after first hearing them played by the Little People. It could be that these legends stem from the ancient belief that the gift of music came from the gods, and for a person to acquire it he must have had some contact with the supernatural. Even today, a composer or artist may speak of her “muse.” 4 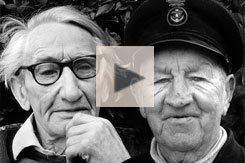 John Emerson and Thomas Hutton tell of the crock of gold hidden at Tara Fort (1979).

One author in 1912, attempting to impose a factual basis onto the legend of fairy music, suggested that the fairies might have actually been the diminutive race of the Tuatha De Danaan, who (in mythology) were forced to live underground by the conquering Celtic peoples, the Milesians. “…and doubtless it was no mere fancy, it was absolute fact, that often, during their residence in earth-houses, music might have been heard issuing from the ‘green hills’ and men and women might been seen dancing around them in the moonlight.” 5

When overheard by mortal musicians the ethereal tunes can be both powerful and dangerous. People who have come into contact with the fairies in this way are held in awe and may be looked upon with some trepidation.6 As reported by Lady Wilde (above) mortals ought not to casually repeat the songs belonging to the fairy kingdom. 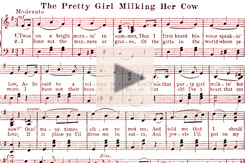 Listen to The Pretty Girl Milking Her Cow. The “fairy tune” is first played on a piano; then a version from Hollywood.

“The Pretty Girl Milking her Cow” (Cailin Deas ag Crúite na mBo) is one of the songs mentioned by Wilde and others as belonging to the fairies.7 Often called simply the “Cailin Deas,” the tune is attributed to Thomas Moore (1779-1852) and was first published in 1796.8 The musical notation and lyrics shown in the video (at right) are taken from The Book of a Thousand Songs, published in 1918.9 Disregarding the prohibition on mere mortals playing the music of the fairies, the tune was revived in 1940 when Judy Garland sang it to George Murphy (playing her father) in the MGM film Little Nellie Kelly. A segment of that performance is included in the video here.

In some legends it is the fairies who, lacking a musician of their own to entertain at a festive occasion, borrow a mortal fiddler or pipe player to step up on their stage. In some versions of this tale the human musician is not given any choice in the matter.11 In other tales, however, the fairies may offer a considerable reward for the services of the mortal. Tom McNamara tells one such story, “The Knockadoon Herdsboy,” in one of his videos found in the Lough Gur page. The herdsboy is given a gold coin for his services. In this story, and others, the passage of time in the fairy realm may be altered. What may seem like hours to the mortal musician could actually be days, or vice versa.12 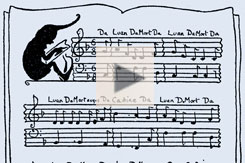 Listen to Da Luan, Da Mort. The “fairy tune” is first played on a piano; then a version by the Italian Celtic group Whisky Trail.

Perhaps the most familiar story about human accompaniment with the music of the fairies is The Legend of Knockgrafton, collected and re-told by Crofton Croker in 1824.13

Lusmore was a poor man with a great affliction: a hump on his back that made him look “…just as if his body had been rolled up and placed upon his shoulders…The country people were rather shy of meeting him in any lonesome place, for though, poor creature, he was as harmless and as inoffensive as a new-born infant, yet his deformity was so great, that he scarcely appeared to be a human creature…”

One night, tired and weary, he rested by the ancient mound of Knockgrafton. From within the mound he heard the most ravishing music:

Lusmore became bored listening to the repeating lyrics. So he took the opportunity to insert his brilliant flourish to finish the melody, agus Da Cadine [and Wednesday].”

The fairies were so pleased with his addition to their song that one of the number stepped forward and proclaimed:

“Lusmore! Lusmore!
Doubt not, nor deplore,
For the hump which you bore
On your back is no more;
Look down on the floor,
And view it, Lusmore!”

And with that, Lusmore’s hated hump was gone from his back. But another man with the same problem, Jack Madden, thought that he could enjoy the same result with the fairies. Unfortunately he made his additions to the tune with no regard for the timing or musical tones: augus Da Gadine, augus Da Hena [and Thursday, and Friday].

The fairies were very angry that he had seriously spoiled their song. To punish him for his artlessness they added Lusmore’s hump to his own, saying:

“Jack Madden! Jack Madden!
Your words came so bad in
The tune we feel glad in ;—
This castle you’re had in,
That your life we may sadden:
Here’s two humps for Jack Madden.”

The Legend of Knockgrafton can be read in its entirety here. The video (above left) contains an excerpt from Da Luan, Da Mort as recorded by the group Whiskey Trail, from their album Pooka (2005). Used with permission. (iTunes link) The illustrated musical notation is from More Celtic Fairy Tales (1902).14

These two high-resolution photographs of Tara Fort were made with a large-format view camera in 1979. Click the photo, and then click the button at the right of its toolbar to see it full-screen. 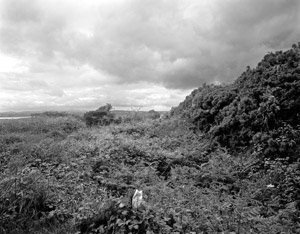 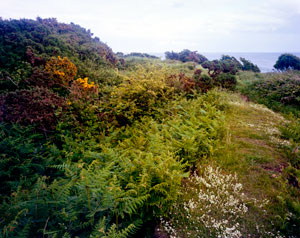 The last great Irish harper-composer was Turlough Carolan (1670-1738). Although smallpox left him sightless at the age of eighteen, he set out with a horse and a guide to travel throughout Ireland to compose songs for his patrons. One of his first songs refers to the fairy queens of two neighboring raths, Sí Bheag and Sí Mhór. According to some biographers, after he became blind he would lie in the sun for hours at a time at a fairy fort near his father’s house. He was seen awakening with a start, as if in a rapture, because of the visions he had in his dreams. He would then begin playing his harp, until the song dedicated to the object of his affections came to him. This tune, Bridget Cruise, was thought to be his masterpiece. “To this day the country people point out the spot from which he desired to be led home. They gravely state that he once related the vision which he then beheld, but was so overcome with terror, that he entreated of his friends not to question him further on the subject; and that he could never again be prevailed upon to repeat what he had witnessed.” 15

“Oh! Turn thee to me, my only love,
Let not despair confound me,
Turn! and may blessings from above
In life and death surround thee.”