“When the traveller…first approaches it, he experiences a sensation of disappointment…But when he enters it, he is struck with astonishment; and his imagination almost instantly transports him to distant ages lost in remote antiquity. He vainly endeavours to figure, in his ‘mind’s eye,’ the beings who erected it, their manners, habits, and costume; until, ‘lost and bewildered in the fruitless search,’ his mind returns to sober investigation, again to lapse into conjecture. This effect is not lost by familiarity—I have visited it a hundred times, and have always experienced the same sensation. The name of this building is Staigue…”

Drag within the image to explore Staigue Fort in virtual reality.

The author of the above quotation, F.C. Bland, was at the time the owner of the large estate, also called Staigue, where the fort is situated, at the head of a postcard-perfect valley sweeping down to the ocean at Kenmare Bay.2 At the time Bland acquired the property the fort was being used as a cattle pound. He ended that practice, and may have restored some of the damage done by the cattle.3

Constructed entirely without mortar, Staigue cashel encloses an area of 27.4 m (90 ft) in diameter, with walls as tall as 5.5 m (18 ft) and a sturdy 4 m (13 ft) in thickness. It has one double-linteled entrance, a passageway 1.8 m (6 ft) long. In the virtual-reality environment (above) click the hotspots to proceed to the fort’s interior. It is similar in construction to the Grianan of Aileach in Co. Donegal, and was possibly constructed in the same period of the Early Medieval period (approximately fifth to eleventh century CE). 4 The fort is surrounded by a large bank and ditch, most evident on its northern side. This may have been a part of Staigue’s defenses, or it may be a prehistoric feature that pre-dates the construction of the stone fort.

In 1897 T.J. Westropp reported that the local peasantry called the building Staig an air, which he translated as “Windy House, or “Temple of the Father,” or “The Staired Place of Slaughter.”5 These different translations may inspire distinctly different conjectures about the builders of Staigue. It has been described as both a temple or an observatory, and has been attributed to many different cultures in the past, such as Druids, Phoenicians, Cyclopeans, and Danes. But it was, of course, built by the “Kerrymen of old.”6

General Charles Vallancey,7 who never visited the site, was so sure of his interpretations that he published a pamphlet about it in 1812. While but 5 of its 73 pages are used to describe Staigue,8 Vallancey, a military man, concluded that the structure’s lack of a parapet meant that it could not possibly be used for defensive purposes. The author, who never would allow logic to interfere with his enthusiasm, proposed that it was an “ancient stone amphitheatre.”

“It is 90 feet in diameter—20 feet high, 14 feet thick at base, and 7 feet thick at top, broad enough to erect temporary seats for the spectators, which may have been either of wood or sod; with an awning, or something ornamental, for the Reise or Irish Rajah—the number of stair-cases then became necessary, for the convenience of getting to the seats with ease, and without molestation to those already seated.” 9 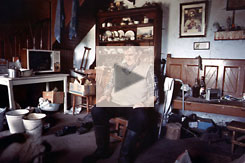 Living close to Staigue Fort, Jackie O’Farrell tells the story of what happened when a man took stones from a fort. (1979).

Vallancey went on to describe the two small corbelled-ceiling enclosures in the walls as “retirements for the mediators, for the bottle-holders [the seconds] of this day,” and the remains of two circular huts outside the fort’s walls as “places of preparation, from whence the combatants were led to the great amphitheatre.”

Bland, the nineteenth century landowner, hypothesized that Staigue was constructed for the defense of a tribe of seafaring miners who discovered ore in the vicinity of the fort and “left this structure, and the others of nearly a similar construction, to puzzle antiquarians.”10 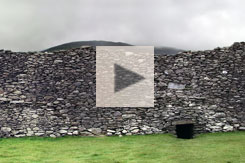 According to Paddy O’Shea, underground passages once connected Staigue Fort to others in the area. (1979).

The sign at the site explains that Staigue “was the home of the chieftain’s family, guards and servants, and would have been full of houses, out-buildings, and possibly tents or other temporary structures.”11 The illustration from this sign is in the gallery below. Cashels, of which Staigue is an impressive and probably high-status example, were enclosed and defendable farmsteads of the Irish Early Medieval period. They housed an extended family and, in high-status examples, their retinue. However archaeologist Peter Harbison was unable to explain why the ancient architects would have created so many (10) sets of X-shaped stairs climbing up the inner face of the wall to its ramparts.12

Local tradition, at Staigue as elsewhere, insists that the underground passages (souterrains) found in some of the Early Medieval stone forts were used by the ancients to connect one fort with another. According to local farmer Paddy O’Shea, recorded in 1979:

The entire conversation may be heard in the audio feature, above left. 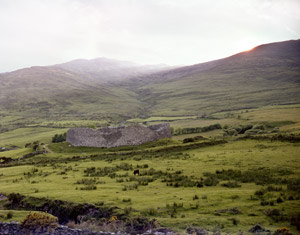 Sunset over Staigue Fort. Click to view in high resolution. 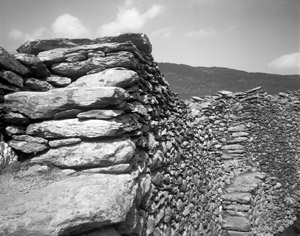 Some of the beliefs regarding Staigue may have contributed to its survival, prohibiting it from being dismantled in the previous centuries by neighbors wishing to use its stones for their own building projects. In a 1979 interview with Jackie O’Farrell, who lived down the road from the fort, a man who removed stones from a local “fairy fort” heard his home “bombarded” each night until he returned the stones. Listen to this recording, above right.14

Recounting a folktale from the Caherciveen area, writer Sigerson Clifford described a football match between the fairies of Staigue and their counterparts in the similar stone fort of Cahergal.

“In the White Strand west of Cahergal the Good People used to play football matches in the bright moonlit nights of olden times…there was a man called Coneen Dannihy who heard the ree-raw and the roola-boola and the whistling one night when he was going home late from fishing, and off he marched to take a peep at them. It was a match between the Fairies of Cahergal and the Little People from Staigue Fort in Caherdonal, and Cahergal were two goals behind and it only wanting five minutes to full-time.” 15

As the story plays out, Coneen is recruited to play for the Cahergal team, and becomes the hero of the match for the fairies. But when his mother, fearful of the powers of the “little people,” conspired to make him late for the next match, he was struck mad by the fairies, “and stayed in the middle of the blankets for nine months, in spite of priest, midwife and doctor.” 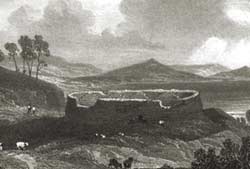 Staigue Fort, by Robert O’Callaghan Newenham, from Picturesque Views of the Antiquities of Ireland, 1830

The breath-taking beauty of this valley presents a natural amphitheater of light and color, with brilliant fuchsia lining the rustic path to the fort. It is, as General Vallancey put it, “a wild and desolated part of the country,”16 evoking a romantic vision of Ireland that even now butresses the postcard ecosystem. In the nineteenth century, books of Irish landscapes, lavishly illustrated with intricate steel engravings were published by subscription. One of these was The Scenery and Antiquities of Ireland, with engravings from the drawings of W.H. Bartlett (1842). Another was Picturesque Views of the Antiquities of Ireland, with engravings from the sketches of Robert O’Callaghan Newenham, (1830). The engraving of Staigue Fort from this work may be seen to the right.17 In the introduction of his book Newenham explains the motivation for his artistry:

“…I devoted my leisure hours to sketching the remains of such remarkable objects as appeared to me to deserve the notice of the Artist or of the Antiquary…To rescue from oblivion remains of the Antiquities of Ireland is the object of this publication.” 18