The Mound of Down, and
Down Cathedral

23 Nov The Mound of Down, and
Down Cathedral

“If it came into the mind of any Irish king to evict the Druid and his followers, and to hand over to some Christian missionary their settlement as it stood, there would be no outward sign to betray the change. The thing did happen, for Druidism was past praying for, whereas Christianity was a vigorous and assertive force, in literal truth, as Baring Gould puts it, ‘Christianity crept into the empty shell of Druidism.’ … For the moment, while its existence was precarious, it would be glad of a second-hand rath for protection.”

Drag within the image to explore the Mound of Down and Down Cathedral in virtual reality.

The Mound of Down is but a short walk down the hill from Down Cathedral. Until the construction of the Quoile water barrier in 1957 the high tides of Strangford Lough often made an island of the Mound, which actually began as a drumlin island in the Quoile Marshes. Traces of the elevated causeways leading to the mound are still visible in the marshlands. Flood waters still come close to the Mound during some winter storms. It is likely that the Mound was originally a hill fort, perhaps dating to the late pagan era of the Iron Age. Scholars believe that it was a royal stronghold of the Dál Fiatach, then the ruling dynasty of this part of County Down.

The Cathedral was first constructed in the 12th century and rebuilt several times since. The connection between the two exists on two levels. The sites are in close proximity within the landscape. But they are also connected symbolically. The two neighbors represent the country’s inexorable, but peaceful shift from paganism, represented by the Druid, to Christianity, represented by St. Patrick, who may be buried under the Cathedral. In the virtual-reality environment to the left you can click on hotspots to travel from aerial and ground-based VR views of the Mound, to the exterior of the Cathedral, and then to St. Patrick’s memorial gravesite.

Despite excavations in the 1930, 1950s, and 1980s, archaeologists have not been able to identify with certainty the nature of the earthworks atop the Mound of Down.2 It is likely that the mound was first constructed as a defensive and habitation site early in the first century CE. This developed into an Iron Age and Early Christian town, Dún da Lethglas, which was burned in 1040 and 1069.
In 1177 this was the site of John de Courcy’s first great victory over the native Irish, when he caught the local chieftain by surprise and killed him. His Anglo-Norman army plundered Dún da Lethglas and then built their 13th-century Norman mote-and-bailey castle, with timber buildings, on the U-shaped mound in the center of the fortification.3 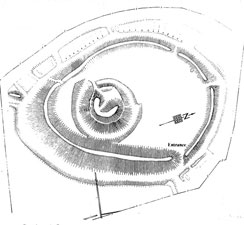 In this diagram from the Mound of Down’s information panel, both the Iron Age earthworks and the central Norman motte and bailey can be seen.

The town of Downpatrick, with Down Cathedral at its prominence, itself evolved over many centuries. Excavations have demonstrated that the site of the cathedral was originally a fortified hilltop enclosure in the Late Bronze Age. It was originally called Rath Celtair, after a fictional warrior of Ulster. It was then known as Dún Lethglaise in the fifth–sixth centuries. The current name of the town, Downpatrick (Dún Phádraig, “Patrick’s Fort”) and the association with Ireland’s patron saint did not appear until John de Courcy’s conquest of the town in 1177.4 The first cathedral there was built by de Courcy in 1183; it was destroyed by an earthquake 62 years later.5

The cathedral was re-built and destroyed a number of times until it assumed its current architecture between 1790 and 1826.6 Tourists and the faithful visit daily, and especially on March 17th of each year. The Saint Patrick Visitor Centre has an IMAX presentation on the life of the saint. But archaeologists and historians have found no early tradition or documentation of the saint’s burial there.7 The stone that marks the burial site was placed there in 1900 by the Belfast Naturalists’ Field Club.8 The stone may be viewed as a 3D model here.

The theories and legends about St. Patrick (born c. 390 CE) run the gamut, from the orthodoxy of Lives of the Saints, to the views of those who doubt his existence at all, to the others who suggest that there were ten individuals by that name, or that he was actually a pagan god.9 Some have suggested that since the celebration of St. Patrick’s Day was not a formal part of the Catholic liturgical calendar until the 1600s, a pagan Spring Equinox festival was Christianized into the familiar March 17th holiday.10

The principal legends of St. Patrick in the popular mind – that he was the first to bring Christianity to Ireland, that he banished the snakes, and that he deployed the shamrock as a metaphor – may be seen as compelling expressions of faith that are not necessarily based upon facts.11 12

Palladius was sent to minister to the Irish by Pope Celestine in 431 CE. Patrick did not arrive until the second half of that century. There is much to make of the symbolism of St. Patrick driving snakes out from Ireland. One symbol for the goddess worship prevalent in Ireland before Christianity was the serpent. Therefore when Ireland was converted to Christianity the snakes were symbolically “banished.” However herpetologists will explain that, since emerging from the last Ice Age, Ireland has always been a snake-free island.

The shamrock is an excellent symbol for the Holy Trinity, and along with the harp, is a symbol for the Irish nation. However the shamrock is never mentioned in the surviving documents from Patrick’s own hand. It is easy enough to see in the legend an echo of the Celtic pagan tradition of expressing divinity in threes, and it’s very likely that some missionary, if not Patrick, extrapolated the concept. 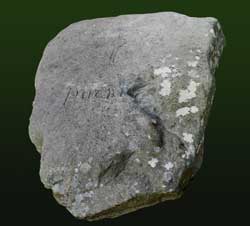 Is it possible that Ireland’s patron saint is buried near this memorial stone?

It is entirely possible that at some point in the very early days of the introduction of Christianity there were some Druidic stragglers practicing the old religion atop the Mound of Down while up on the hill there were the adherents of the new faith. The religion of Jesus came gently into this land. “…The beautiful and poetical tale of the lovely young Mother with her Child-God, wrought upon the tender feelings in the naturally sympathetic hearts of the Irish, who adopted it readily into their pagan legends, which were not overthrown by it, but on the contrary served as a frame to show off its beauty…” 13

Yet aspects of the St. Patrick story have him appearing at various locations throughout Ireland personally converting the Druids and overthrowing their idols. The eleventh century compilation of earlier legends about the saint, The Tripartite Life of St. Patrick, describes how Patrick found three pagan pillar stones in Galway, on which he directed be inscribed the names of Jesus.14 In the Book of Lecan (c. 1400 CE), St. Patrick burns “one hundred and eighty books of the Druids.” 15 The Druids have left us no written records. Perhaps the author of the Book of Lecan was attempting an explanation of that fact?

The legendary St. Patrick, once deceased, seems to have provoked a battle that is depicted in the Annals of the Four Masters (compiled c. 1630 CE from earlier material). It seems that one tribe, the Ulaid, wished to maintain possession of the saintly remains. But their rivals, the Airgíalla, wished to bring them to Armagh. A magical vision occurred so that each tribe left the field of battle believing that they were conveying the holy relics to the own lands. “The body of Patrick was afterwards interred at Dún da Lethglais [Downpatrick] with great honour and veneration…”16

If indeed Patrick is buried here at Down Cathedral, he may not be the only saint in the grave. When de Courcy was consolidating his hold on the town he is said to have ordered the bones of the other patron saints of the country, St. Brigid (d. 523 CE) and St. Columcille (d. 594 CE) to be exhumed and re-interred along with the bones of St. Patrick on the cathedral hill of Downpatrick. “On the 9th of June 1196, on the feast day of St Columcille, in the presence of fifteen bishops, from all over Ireland and a large number of clergy, the relics of St. Patrick, Brigid, and Columcille were buried in one tomb with great solemnity.” 17 As the traditional Irish rhyme puts it:

“In Down three Saints one grave do fill –
Patrick, Brigid, and Columcille.” 18