Posted at 01:21h in Completed, Earthworks, featured by Howard
Share

At this spot in the year 1311, Dermot, the “tower-like hero” of the O’Briens, was inaugurated as their chieftain. With the other leaders of the clan assembled around him, his bard commemorated the event:

“Let us give the title of King,
(Which will be of much fame
To the land which has chosen him)
To the valorous warrior
The son of the fair-formed Donogh
Of the sealed secrets
Generous heir of generous Blood.”

Drag within the image to explore Magh Adhair in virtual reality.

While all commentators agree that Magh Adhair (also known as “Moyare Park”) was the inauguration site for the Dál gCais (Dalcassian) Kings of Thomond, including the illustrious Brian Ború, there is no consensus about what the site may have held in prehistoric times. Because the complex structure includes a cairn-like feature, some writers think there may be a kernel of truth to the medieval texts that describe it as the burial place of Adair the Firbolg, a brother of the legendary architect of Dun Aengus in the Aran Islands. 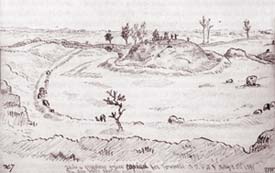 T.J. Westropp titled his 1891 sketch, “Moyar the crowning place of the Kings of Thomond.”

The name “Magh Adhair,” in fact, may be translated as “Adair’s Plain.” Can it be possible that somehow a memory of a first-century warrior’s grave so impressed itself upon the predecessors of the Dalcassians that they enshrined its sanctity for the inauguration of their own princes from the 5th to the 16th century?2

John O’Donovan, who visited the site in 1839, considered it likely that the mound contained an early Iron Age tomb. He compared it to other similar inauguration mounds where it was recorded that a warrior long ago “raised the carn that it might serve as a tomb for himself…as a place of fairs and meetings of the people, and that his heir might be inaugurated on its summit, that is, standing over his own urn.”3 T.J. Westropp, writing some 70 years later, suggested that the mound was not originally sepulchral at all, but was built and functioned originally as a residence.4

Other writers, using improbable etymological gymnastics, suggested alternative histories for Magh Adhair, extracting from its name “the field or adoration or worship,” and suggesting that “an open temple, consisting of a circle of tall straight stone pillars with a very large flat stone called Cromleac serving for an altar, was constructed by the Druids for religious worship.”5

Of these O’Donovan, the sober and erudite Ordnance Survey place-name expert, fulminated:

“What are we then to think of etymological investigators? They can take words asunder as they please, and give to each component part whatever meaning will best answer the historical theory to be established! Nothing amuses me more than the barefaced effrontery with which they urge their silly conjectures as valuable truths, and there is no class of men I hold in greater contempt than those who attempt to build a false system of history on their own etymological speculations.” 6

Although some features have eroded since Westropp’s turn-of-the-century measurements, he would recognized today the flat-topped mound, 6 m (20 ft) tall, with its diameter on top ranging from 26 m (85 ft) to 30.5 m (100 feet). Around it can still be noted a bank, in places 1.6 m (5.2 ft) high and a 3 m (10 ft) wide ditch. A sloping causeway, which may have served a ceremonial function, leads across the bank to the west, its sides faced with rough stone. A cairn, about half the size of the mound, is about 30 feet away to the west, near the bank of the stream known as the Hell River.7 Across the stream to the west is a pillar stone, 1.9 m (6.3 ft) high, in alignment with the two mounds and the sloping causeway (see photo in gallery). The shattered base of a second pillar is located along the same axis. 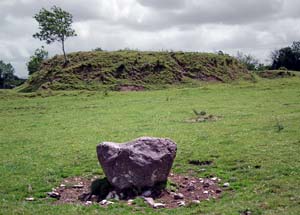 Click for a close-up of the bullaun stone.
(Courtesy Clare County Library)

Within the enclosure to the north of the mound is a bullaun (basin) stone made of a purple conglomerate, likely brought to this spot from another location. This may be seen in two views, below left. Some have suggested that the bullaun played a role in the inauguration ritual; with the man who would be king washing himself with the sacred water of its basin, and using as a symbolic soap the red stone fixed in the rock.8

About 457 m (500 yds) to the southwest of Magh Adhair sits Cahercalla, a large stone fort identified by Westropp as a royal residence due to its three defensive walls, in places 5.2 m (17 ft) thick and 2.4 m (8 ft) high. Can this be where the royal party was in residence prior to the inauguration ceremonies at Magh Adhair?

Unfortunately, as may be noted by the sketch in the gallery below, part of the outermost wall of Cahercalla had been lost before Westropp’s visit. In 1892 the antiquarian was informed by the tenant that his grandfather was the one working to demolish the structure, but he…

“…was suddenly taken ill, and, fancying he had been ‘struck’ by the fairy inmates of the fort, desisted from his work of destruction; this fortunately saved the caher, and beyond the removal of a small late enclosure in the central ring, no harm has since been done.” 9 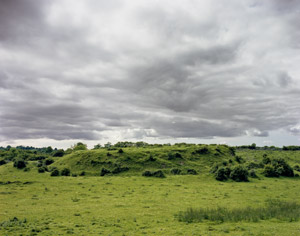 The fort, covered with vegetation and several fields in from a road, may be seen in the satellite view, below left, with the route of a conceivable inauguration procession to Magh Adhair indicated by an arrow.10

Of the actual Dalcassian inauguration ritual at Magh Adhair, Westropp quoted from an account of the kingship ceremony of Cathal Crovderg O’Connor (d. 1224). The chronicle mentions the palisade leading to the top of the mound, a feature that may yet be noted today. It describes how a gateway to this ramp was guarded during the ceremony by three chiefs, while a fourth was given the honor of taking the sacred white wand, the slat na rige, up to the candidate waiting atop the mound. This “rod of kingship” was cut from a sacred tree, called the bile.

“The other chiefs, and the coarbs of the principal local saints, stood below, holding the prince’s arms, clothes, and horse, and afterwards assisting him to robe and remount. The chief faced the north, and, on stepping down from, the stone, turned round thrice each way, as is still the custom in Clare, on seeing the new moon.” 11

Brian Boru, who was to become known as the “Emperor of the Gael,” assumed the leadership of the Dalcassians in 976 upon his brother’s death, and was named Ard Righ (High King) of Ireland at Cashel in 1002. His first investiture, as Prince of Thomond, probably occurred at Magh Adhair. A reenactment of this was staged at Magh Adhair on June 21, 2014. 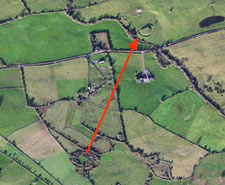 A possible procession route from the fort of Cahercalla to the Magh Adhair inauguration mound is indicated by the red arrow. Click here for the satellite view.

Because of confusion and obscurity in the ancient histories, the earliest mention of Magh Adhair in the Annals occurs in 877, with a challenge to the honor of the kings of Thomond at the site. The Ard Righ, Flan Sunagh of the Uí Néill tribe, although warned not to insult the Dalcassians, set up a chessboard on their inauguration mound and challenged one of his chiefs to a game of chess. This provocation so enraged the Dalcassians that Lorcan, their king, mounted a fierce attack, destroyed the Ard Righ’s gaming table, and left him lost in the wood, “worn out with cold, hunger, and fighting.” The High King was forced to surrender three days afterwards. Lorcan accepted his victory with astonishing chivalry, making certain that the High King’s army was well fed before escorting them over the Shannon on their way back north. The Dalcassian victory was sweetened, however, when they claimed as their prize the most famous bard of the High King.12

During the time of Brian Boru a more significant affront to Dalcassian honor occurred when Máel Sechnaill mac Domnaill of the Uí Néill, the Ard Righ, on a scorched earth campaign in Thomond in 982, stormed Magh Adhair and destroyed the bile, the sacred inauguration tree “after it had been dug from the earth, with its roots.”13 Thrown a bit off balance by this attack, Brian quickly recovered with new conquests.14 A new bile was planted for the Magh Adhair inauguration ritual, but the Annals report that this tree too was cut down a couple of generations after Brian Boru when Aed O’Connor, King of Connaught, ravaged the site in 1051. Afterwards, with the line of the Ard Righ returning north to the Uí Néill, the spotlight of history moved away from Thomond, and there is little further mention of Magh Adhair.

By then, however, the function of Magh Adhair had expanded beyond the purely ceremonial. While it is likely that inaugurations continued to be held atop the mound perhaps to the reign of Elizabeth I, it had become known as Óenach Maige Adair, signifying its role as the Dalcassian’s óenach, the official meeting place where important business was conducted, where laws were enacted, and where symbolic sporting competitions took place. With the passage of time the site evolved into the venue for merrymaking and a trading fair, just as in modern Irish the word aonaigh came to mean exactly that: a market, or fair.15

When T.J. Westropp made his visit to the site near the end of the 19th century, the locals informed him that market fairs were held at Magh Adhair until around 1845, stopping only with the tragic dislocations of the Great Famine (1845-1852). He even found some of the eldest nearby who could faintly recall attending the fairs themselves. They knew, from ancient local tradition, that the mound was a “king’s grave,” harkening back to the tales of Adair the Firbolg. But they admitted to Westropp the story of it being the place where “they made a king of Brian Boru,” they knew only from hearing it from the Ordnance Survey team more recently. As Westropp concluded afterwards: “Much history, spread during this survey, is becoming bogus antique tradition.”16