“The view from the summit of the fort is most impressive and solemn: the desolate-looking fields…fall away to the golden crescent of Kilmurvey strand, and rise up the opposite hill…to the old lighthouse near Dun Oghil. Eastwards runs the long range of steep, dark headlands, and deep bays, rarely unsheeted by high-leaping spray…The limits of the view on clear days reach from the giant peaks of Corcaguiny in Kerry to those of Connemara; while to the south-west is only the horizon of the landless deep, whirling sea-birds, and the sparkling silver tideways.”

Drag within the image to explore seven different views of Dun Aengus in virtual reality.
An interactive map will appear when you click the button to enter full-screen mode.
Touch here for the mobile version.

When T. J. Westropp, the most lyrical of the Victorian antiquarians, visited Dun Aengus on the westernmost Aran Island of Inishmore in 1909 it was already too late to see it in its original form.

Poorly conceived and badly documented restorations in 1884 and later had removed some features and added others—principally the massive stone buttresses of the inner wall—but Westropp was undeterred.2 His Study of the Fort of Dun Aengus considered every detail of this cliff-side wonder of the western world, from its origins in mythology to the intricate details of its dry-wall construction.

In the virtual-reality environment you can explore Dun Aengus from seven different positions, including three where you can see the buttresses in detail. The VR tour begins at the outer enclosure, just at the edge of the eastern cliff. Hotspots will lead you step-by-step to the inner enclosure. To use the interactive map, wait until the panorama loads completely, then click its full-screen button at the lower right of its toolbar.

As the legends recounted in the Lebor Gabála (Book of Invasions) would have it, the mythological race of the Fir Bolgs built Dun Aengus after they sought refuge on the island in the first century CE. They named the fort after their chieftain, Aenghus, King of the Clann Umoir, “the sterling pilot of his people who lives in legend as the founder and first lord of Dun Aengus.”3

“The Fir Bolg gave them [the Tuatha Dé Danann] battle upon Mag Tuired; they were a long time fighting that battle. At last it broke against the Fir Bolg, and the slaughter pressed northward, and a hundred thousand of them were slain…The Fir Bolg fell in that battle all but a few, and they went out of Ireland in flight from the Tuatha Dé Danan…Thereafter they came in flight before Cairbre under the protection of Meldb and Ailill, and these gave them lands. This is the wandering of the sons of Umor. Oengus son of Umor was king over them in the east, and from them are named those territories, Loch CIme from Cime Four-Heads son of Umor, the Point of Taman in Medraige from Taman son of Umor, the Fort of Oengus [Dun Aengus] in Ara from Oengus, the Stone-heap of Conall in Aidne from Conall, Mag Adair from Adar, Mag Asail from Asal in Mumu also. Menn son of Umor was the poet. They were in fortresses and in islands of the sea around Ireland in that wise, till Cu Chulaind overwhelmed them.” 4

Lebor Gabála Érenn: The Book of Invasions of Ireland
§39-54: “The Nemedians and the Fir Bolg”

Dun Aengus is precariously perched on the edge of a vertical cliff, perhaps parts of it already fallen down into the churning waters of the Atlantic nearly 100 m (300 ft) below.5 Its four defensive walls, four m (13 ft) thick and six m (19.5 ft) high, form semi-circular bulwarks. These enclose an area of some six hectares (14 acres) and protect the innermost bastion at the southern edge of the cliff. Dun Aengus is believed to been built and occupied originally in the Iron Age, although there was habitation at the site earlier, in the Bronze Age. Because of the Dun Aengus’ remote location, and the fact that it consists largely of naked rock with little soil cover, there were no detailed excavations by the earlier antiquarians. Also, it may be assumed that much of the remains of an extensive habitation that elsewhere might be uncovered in middens would here have been simply dumped over the cliff by the inhabitants.6

Four summers of excavations (1992-1995) undertaken by the Discovery Programme found evidence of circular huts, with finds including pottery sherds, bronze rings, and fragments of clay moulds used for making spearheads. The excavators gave a date of the Late Bronze Age for these artifacts. Animal bones found with other occupation materials yielded a C14 date range of 900 – 700 BCE. At the threshold of the entrance passage was discovered the burial of a youth, dating from c. 800 -1100 CE. Amber beads, perhaps part of the burial, were also found.7

Perhaps the most striking feature of Dun Aengus are the menacing rows of chevaux-de-frise, sharp stones, up to 1.5 m (5 ft) in height. These were set into the bedrock at an angle to impede—or impale— an invading army. This tactical innovation is literally “Frisian horse,” named after an Iron-Age Germanic tribe which had no mounted warriors and relied on these anti-cavalry defenses. These can be seen clearly in one node of the virtual-reality environment (top, left). Dun Aengus is one of only four sites in Ireland where this feature can be seen.8 When John O’Donovan saw them in 1839 he imagined a petrified army on the attack. Donovan stretched the truth somewhat with “many of them are so sharp that, if one fell against them, they would run him through.” Unfortunately, some of these stones, and other pieces of the fort as well, were removed by visitors to the fort in earlier times, who delighted in the sport of hurling them down the cliff to watch them careen into the ocean.9 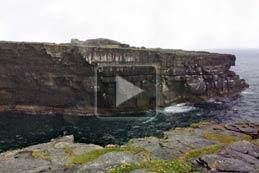 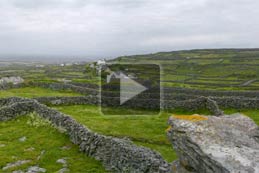 While excavation has determined that Dun Aengus was used as a habitation site, with alterations and refinements spanning perhaps a thousand years,10 other theories have been proposed by the different generations of antiquarians who came to explore the fort, beginning with Roderick O’Flaherty in 1684.11 George Petrie in 1834 called it “probably the most magnificent barbaric monument extant in Europe,” and promised his readers that he would present “a numerous collection of facts, the result of long and laborious research, and will venture on no conclusions excepting those which are authorised by satisfactory evidence.”12

Other writers, however, based their conclusions on the traditional quasi-historical literature of the Annals, or simply upon their instincts. Some concluded that Dun Aengus was primarily a place for the performance of religious rites. In 1825 John O’Flaherty claimed to find there “the remains of Druidism—open temples, altars, stone pillars, sacred mounts of fire worship…”13

“In Dun Aengus, the strange…sun-temple, on Aranmore, we have another example of the localization of the Aengus myth…with its tiers of amphitheater-like seats…were anciently celebrated pagan mysteries…and initiations into an Aengus Cult such as seems to have once flourished at New Grange. Dun Aengus…so secure and so strongly fortified against intrusion, no doubt represented a somewhat different mystical school, and probably one very much older than at New Grange.” 14

The monument has been a focus of interest for generations, perhaps more than any other prehistoric monument in the country.15 When John O’Donovan first got a glimpse of the fort in 1839, he “…shouted with delight, and after launching his umbrella a marvelous height into the air, threw himself on the ground, and shouted again and again.”16 Yet O’Donovan noted that even the name—Dun Aengus—was lost to the native population. He found only one old man who remembered the ancient name, using its “correct Connaught pronunciation of Dun Innes.”17 Everyone else called it simply “Dunmore” (the big fort).

An author in 1945 told of his excitement upon finally reaching the ancient fort, about how he marveled at its timeless, stark beauty and the thrill of being close to the perilous drop of the cliff edge. On the voyage back to the mainland, he poured out his emotions to the boatman, hoping to gain an even greater appreciation of the site by learning what a native Aran Islander thought about the fort. He asked the boatman, ”’Won’t you tell me something of all that Dun Aengus means to you?’ His eyes took on their dreamy, cloudy look. His mouth softened. He spoke: ‘Och, I never was there. I’d rather a pint of porter.’”18

“In the first century I would have broken
my back to help build this ring fort to fight
invaders from the West, the stones we snap
dragging behind me and a dozen others,
while you prayed I might return with my head
uncrushed and my limbs young enough to clutch.

Two thousand years bring us here on bicycles.
We read about Dun Aengus: guidebooks grant us
foreignness. I drop to my belly, slither
to the edge, stare down three hundred feet, where sea
leaps upward, battering the cliff. I must
back off, get gone, even were you not screaming,
even were there something here for us,
some plunder or possession we could grasp
and look out to the West, the sea, and home.” 19