“You can see other smaller [forts], out there. There was the theory that they were all connected by an underground passage; but they never found it…The man whose land it was on, he wouldn’t allow you to play on there, or move the stones. It was supposed to be left as it was. He would not even move one stone. It would be inhabited by the fairies or something…He wouldn’t even take—bad luck— the pebble off it. That’s why, when the place was being excavated, he really would have gone berserk.”

Drag within the image to explore Loher Stone Fort in virtual reality.

The folklore that Loher Stone Fort is connected to other forts, or cahers, on nearby hills by a network of underground passages is not unique to this postcard-perfect location overlooking Ballinskelligs Bay. Similar stories are heard throughout the country. One such tale, connecting two of these forts with a nearby medieval stone castle is recounted across the Macgillycuddy’s Reeks on the other side of the Iveragh Peninsula near Cahersiveen. In fact, when Loher Stone Fort, really a fortified farmstead, was excavated it was found to contain beneath one of its houses a short underground passage, or souterrain. This may have been a tunnel of refuge or it might have been—more prosaically—used for cold storage. It has now been closed up. You may enter such a tunnel in virtual reality by visiting our page on the Binder’s Cove Souterrain.

After its excavation and recent reconstruction, the fort’s two stone house foundations—one circular and one rectangular—were found to be constructed on top of the remains of earlier homes made largely of wood.2 The enclosing wall, up to 3 m tall and 3 m thick (10 ft) has on its inner face steps that crisscross and lead up to the top of the ramparts of this circular fort, 20 m (65.6 ft) in diameter. This detail may be noted in the virtual-reality tour by following the links leading to the interior of the fort. The construction is similar to other forts in Co Kerry, and may be noted in detail in the interior panorama of the nearby—and better known—Staigue Fort.

Early antiquarians, using more imagination than scientific method, envisioned these stone forts as circular temples for the worship of the sun. An 1841 account of a fort in Co. Wexford is a good example:

“Their use was religious…the worship that of the sun. When anywhere within the outer rampart…we have no view of anything terrestrial; and the depression at the East gave the worshipper in the interior the first view of the Deity in the morning, and that in the West the last view of his departing glory, unmixed with any earthly objects.” 3 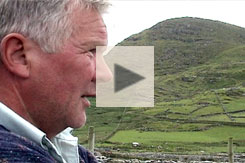 Locals Patrick Curran and Thomas Kelly were not allowed to play near the fort in their youth.

It is likely that a locally important chieftain built the fort in the Early Christian period, perhaps around the ninth century CE.4 While there is no history or tradition connecting this homestead to a particular individual, either historic or legendary, it is evident that he had brilliant sense for its strategic location. The fort, protected on three sides by mountains, has fine agricultural land to its west. Perhaps just as importantly, its high vantage point overlooking the narrow entrance of the bay would make it difficult for any ship to enter without being noticed. A visitor today may be more likely to notice the astonishing beauty of the view down to the sea, with Skellig Michael visible on the horizon.

Today it may be difficult to find anyone in the vicinity of Loher Stone Fort who still believes in a maze of underground passages connecting it with the other neighboring forts. Archaeologists dispute that there was ever such a network of passages. But as the prominent Irish folklorist J.H. Delargy (Séamus Ó Duilearga) wrote in 1945,

“Many of the old story-tellers believed in all the marvels and magic of the typical wonder-tale, and if some forward youth were to inquire if these things could possibly be true, the answer of most would be: Bhiodh draíochta ann sa tseana-shaol! ‘There was magic in old times!'” 5