Perhaps in Ireland no type of structure, whether for the living or the dead, has been so long in occupation, so long a thing made use of…Even to-day the modern tramp does not disdain to spend a night in one of the outer chambers when it is big enough to admit him, and everyone knows that the fairies of Ireland never forsook them and still continue to hold high revel in them.

Drag within the image to explore the Binder’s Cove souterrain in virtual reality.

When the Binder’s Cove souterrain was constructed around the ninth century CE, it may have been a place of refuge where the occupants of a nearby homestead could escape when threatened, their smoky torches throwing shadows as they raced down into the narrow tunnel. The shadows of today’s visitors, however, come from the solar-powered lighting that makes this one of the most visitor-friendly of the thousand or more souterrains surviving in Ireland.2

Souterrains, from the French “beneath the ground,” were built in the Early Christian period in Ireland as escape routes from invading Vikings (or the plundering clan nearby), and may also have been used as safe places to store the family’s valuables. Being cold year-round, they could also have been used for their more prosaic utility as food larders. They were constructed by digging an open trench, in which a dry-stone wall was assembled on both sides to form a tunnel. Horizontal lintel stones were then laid on top of the wall stones, and the entire assembly, stable without mortar, was then covered with earth. In time there would be no trace on the surface of the hidden escape route underground. Some souterrains, although not the one here, have low “creeps,” blind alleys, split levels, or hidden guard posts, all designed to thwart an enemy. The tunnels can also include ventilation shafts, and niches or cupboards in the walls. Some chambers included stone corbelling of their large inner chambers, similar to that seen both in the Neolithic passage tombs (see Newgrange), and in the Early Christian beehive huts of the Dingle Peninsula (see Gallarus Oratory).

Souterrains are often found in proximity to earthen ringforts (raths), of which there are tens of thousands in the country. These forts provided basic security for a farming homestead for centuries after the arrival of Christianity in the fifth century, as improved techniques of agriculture led to an increasing population. But the raids of the Norsemen required more defensive strategies than possible with the simple earthen walls of a ringfort. The souterrains supplied the needed escalation in defensive architecture. In the early years of the twentieth century, Mary Hobson made them her passion:

For many years past I have lost few opportunities of visiting and measuring any souterrains of which I have heard…So many are situated far from a railway station, occasionally in almost inaccessible places, and being underground are subject to flooding, some of which never dry up and are consequently impossible to enter, others I have waited for months to see, and again great numbers are closed, the entrances lost, and even their existence forgotten.3 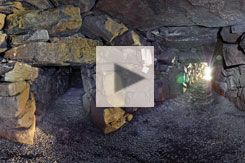 While many souterrains were built into pre-existing ringforts, others were built independently or in proximity to wood and wattle domestic structures that no longer survive. Others were constructed as defensive additions to circular forts of dry-stone construction (cashels), such as the souterrain at Leacanabuaile, which was entered from a stone hut inside the cashel and ends in a chamber within the fort’s perimeter wall. Some souterrains found a later utility into the modern era, deployed as hiding places for both smugglers and priests during parts of the eighteenth century, and used for arms caches and hiding places for the IRA during the Irish struggle for independence in the twentieth century.4

Binder’s Cove was in use at a time when Irish society was sophisticated, tribal, socially stratified, rural and violent… Looking at the isolated site today try and picture the scene of a bustling and prosperous farm settlement with dwellings, outbuildings and animal enclosures.5

This souterrain, near the settlement of Finnis, and just down the road from the impressive Legananny portal tomb, was rediscovered in the early eighteenth century. It was originally referred to simply as the “Finnis Cave,” but was also known by the name of the nearby peak, Slieve-na-Boley. The site took its modern name from a previous owner of the field (“Binder”) and a corruption of the English and Irish words for “cave.”6

At the foot of Slieve – na – Boley, is the longest cave I have seen in the two counties. The entrance is very small; one feared to stick fast in it and run the risk of displacing the stones; in such an event entombment would surely follow. (Mary Hobson, 1909)

Binder’s Cove became one of the few souterrains with a certifiably safe welcome for the modern visitor when its landowner approached the local District Council around 1999 with the suggestion that the tunnel could become a local tourism destination. A partnership of local and national (Northern Ireland) agencies funded the restoration, which included the work of a skilled stonemason to stabilize the dry-stone architecture and an electrician to install the interior lights, the batteries, and the banks of solar cells outside that keep the system charged. The souterrain opened to the public in July 2003. Its gate, designed to keep out the animals, is normally unlocked. During the winter months, however, the “cave” may be flooded with several feet of water and the gate locked as a precaution.7

In a 1907 article about another souterrain in the Binder’s Cove neighborhood, J.M. Macrory spoke of the folkloric traditions of the area:

Here, amongst a people most obliging and courteous in manner, the belief in the power of blessings and maledictions, in apparitions and banshees, in fairies and witches, in myths and dreams, in spectres and spells, in charms and elf-shooting, and in good and bad luck, still obtains to a greater or less extent. Old faiths and customs or usages die hard in a community which has had an unlimited stock of wonderful traditions, handed down from generation to generation, from the far-off past…8

The legends most frequently heard about souterrains describe how they extend underground for improbable distances, connecting different ancient monuments or mountaintop redoubts. In another Co. Down monument, near Portaferry, there was a legend that a passage led from an “old graveyard in Slans” all the way up the hill to Tara Fort.9 John Emerson tells this story in the video, above right. The previously mentioned souterrain at Leacanabuaile (Co. Kerry) is reputed to connect to the nearby ruins of Ballycarbery Castle. But perhaps the most ancient legend concerning a souterrain is that of “The Cave of Ainged,” a souterrain with an ogham-stone lintel, found within the ritual landscape of Rathcroghan. The story, which occurs in both the twelfth-century Book of Leinster, and the later Yellow Book of Lecan, describes how the hero Nera followed some plundering spirits into their sídh (fairy home) within the cave.10

We had our own encounter with potentially malevolent spirits inside the souterrain while creating the photographs for the virtual-reality tour (top left). Eager to begin the work, we failed to fully read the instructions on the information panel at the tunnel’s entrance. After crawling past the low obstruction lintel, pushing the heavy VR tripod and camera equipment in ahead of us, nearly 15 minutes had elapsed by the time the actual photography process commenced. Unfortunately, had we read the information panel we would have known that the interior lights automatically turn off after a 15-minute interval. In total darkness, leaving the camera behind, we crawled out of the tunnel and took a good look at the information panel, where it clearly states that there are switches located at each of the light fixtures to turn the lights back on. Was it a mischievous denizen of the sídh who stopped us from reading the instructions? Mary Hobson may have answered the question:

The building of [the souterrains] is nearly always attributed to the’Danes, ‘the Fairies,’ the ‘Good People,’… the Tuatha-da-Danaan, a people who are said to have lived in Ireland before the coming of the Celts…Innumerable are the tales of how a person’s grandfather has seen them literally disappear into the earth and the hillsides, and how, even to-day, misfortune always follows the meddling with a cave, the cutting of a fairy thorn, or the removal of an earthen fort. Fairly educated people give instances, and will say they ‘don’t altogether believe in it,’ yet they know of people dying within the year, their children being dwarfed, misfortune coming upon their cattle, etc., and very few people, even city-folk, will venture into these caves or palaces, and no wonder, for they are weird and uncanny, always enveloped in an awesome gloom. When creeping through the tiny doorways, if alone, one needs to summon some little courage.11