When a man-made structure, such as the Legananny Dolmen, has been a distinctive part of the local landscape for perhaps 4,500 years, it has earned its iconic status. This portal tomb on the southwest side of Slieve Croob in Co. Down is one of the most photographed stone monuments in Ireland. The Poulnabrone Dolmen, located on the main tour bus thoroughfare of the Burren in Co. Clare may be more frequently visited. But its remote location and its emphatic formalism make the Legananny Dolmen stand out against the sky as a sculptural object that inspires the visual artist. That, of course, is coupled with its evocative mysteriousness.

Drag within the image to explore the Legananny Dolmen in virtual reality.

There are some 2000 photographs of this tomb to be found in a Google image search. Its distinctive “tripod dolmen” shape has been likened to a coffin held high by its pallbearers. It was the iconic cover model for a book about Irish monuments published in 1902. Traces of the Elder Faiths of Ireland 1 used a gold-embossed image of this monument. A drawing of the tomb was also on the cover of the 1971 edition of Antiquities of the Irish Countryside 2 (see illustrations, below left). This “cover image” usage is honored within this project, as a miniature version of the rotating Legananny Dolmen is found on the Voices from the Dawn “About” page.

The stark and expressive shape of this tomb has inspired generations of artistic interpretations, included the photograph at the top of this page, taken in 1895 by the umbrella-toting Lord Annesley. Even earlier are the sketches of the Ordnance Survey in the 1840s and William Gray’s drawing of 1884.3 Modern photographers, painters, and multimedia artists have continued the tradition by deriving their own interpretations from this megalithic muse. A selection of these may be seen in the gallery below.

The virtual-reality environment (above) allows a thoroughly immersive exploration of the tomb, with panoramic views from two positions outside the structure and another from within it. There is also a “virtual-reality object” that will allow you to rotate the dolmen around its own axis (below). Click on it, then drag within the image in the floating window.

Traces of the Elder Faiths of Ireland, 1902. 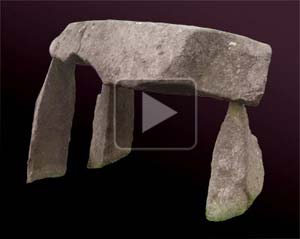 Antiquities of the Irish Countryside, 1971.

The capstone of the tomb is more than three meters (10 ft) long. The tallest of the supporting stones is two meters (six ft seven in) high. There could have once been a cairn covering the tomb, as other boulders underneath the grass may indicate. There were reports of an urn being found in the chamber underneath the tomb.4

The Environment and Heritage Service signpost at the site explains that the name of the monument (and the townland) derives from Liagán Áine, “the pillar stone of Anya.” She was, in mythology, the mother goddess associated with the warrior Fionn mac Cumhaill.5 However a 1989 article researching local place names suggests an alternative: Liag an Fhanáidh, “the flat stone on the slope.” 6 The Legananny Dolmen’s commanding position presents views to the length of Slieve Croob to the northeast, and the Mountains of Mourne to the south. The visitor-friendly Binders Cove souterrain is close by.

The site’s information panel suggests that one of the names for portal tombs such as this one has traditionally been “Druids’ Altar.” The connection of these Neolithic monuments with the Druids, the priestly caste from the pre-Christian Iron Age, is a lingering artifact of the romantic antiquarian writing of the eighteenth century. For example, a journal article in 1785 notes of nearby Slieve Croob,

“On its summit still remain the vestiges of Druid worship, the rude altar, and the sacred well, and that during the era of Druidical government, their priests were not only the judges, but executioners of those who were doomed to death either as delinquents, or victims of sacrifice.” 7

The connection of the megalithic monuments to the Druids was not, however, noted in texts a century earlier. A letter written in 1692 states “…I have found nothing hitherto either in the names of these monuments, or the tradition that goes about them, which doth particularly relate to the Druids, or points them out.” 8

A visit to the Legananny Dolmen connects the visitor not only to the monument but also to the uncounted generations of others who have stood in the same spot, beginning with those whose hands first raised the stones into the shape we still see four thousand years later. It is an enduring place, creating an enduring fascination.

“Certain objects, both natural and man-made, persist as places through eons of time, outliving the patronage of particular cultures. Perhaps any large feature in the landscape creates its own world, which may expand or contract with the passing concerns of the people, but which does not completely lose its identity… How is it possible for a monument to transcend the values of a particular culture? An answer might be: a large monument…carries both general and specific import. The specific import changes in time whereas the general remains… Enduring places, of which there are very few in the world, speak to humanity.” 9