“From the town of Fermoy…you may plainly see the mountain of Cairn Thierna. It is crowned by a great heap of stones, which, as the country people remark ‘never came there without a crooked thought and a cross job.’…This great pile on the top of Cairn Thierna was caused by the words of an old woman, whose bed still remains…”

Drag within the image to explore Cairn Thierna in virtual reality.

From a distance the cross on the summit of 219 m (719 ft) Corrin Hill provides no evidence of this site’s more ancient patrimony. At the end of the path up the hill, punctuated by the Stations of the Cross, a great tumbled pile of reddish stone now seems a secondary feature to the large illuminated Christian symbol. But these stones are in the center of an Iron Age ring fort, and they constitute a much earlier cairn that held two Bronze Age burial cists. In legend, this was built by the Cailleach Bhéarra (Hag of Beare) to hold the remains of the husband she murdered, the druid Mogh Ruith.2 One story, which we’ll return to below, insists that the hilltop stones are all that remain from an abandoned castle, never completed due to the malevolence of the same hag, who is buried at the nearby Labbacallee Wedge Tomb.

From the top of the cairn, the view on a clear day reaches from the Ballyhoura Mountains to the north and the Knockmealdowns to the west. The stone cross, erected in 1933, is a prominent local landmark that can be seen from afar by travelers in either direction on the M8 motorway. The distant cross is also the initial view of the virtual-reality environment to the left.

Amateur antiquarians who excavated the cairn in 1832 and 1837 reported finding two dolmen-like sepulchral chambers, or cists, now ruined. Two burial urns were uncovered, but their whereabouts today is unknown. One of the urns was quickly broken by the workmen, too eager to find the treasure they believed it held. The other was found to contain “a small quantity of ashes.”3 This finely decorated urn may be seen in John Windele’s drawing, below right. 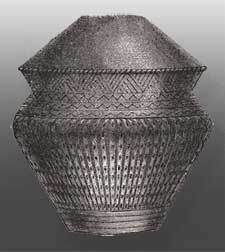 Charles Smith wrote in 1750 that the name “Cairn Thierna” translates as “The Thane’s [or Lord’s] Cairn,” and that it was in earlier days used “for the purpose of elections and assemblies.”4 There is now no evidence of any structure from antiquity to be seen here. Aside from the cross the only man-made construction on the hilltop is, in the center of the cairn, the foundation of a concrete observation post built during the Second World War.5 This may be noted in the virtual-reality environment above.

In the second volume (1828) of his Fairy Legends and Traditions of the South of Ireland, Thomas Crofton Croker enlisted Corrin Hill as the setting for two of his reweavings of traditional material. The first, “The Legend of Cairn Thierna,” is a tragic tale that casts the Hag of Labbacallee (the local version of the Cailleach Bhéarra) as a malicious fortune-teller whose prophesy cost the life of the Lord of Fermoy’s young heir.

“He had only one son and never was there seen a finer child. His young face filled with innocent joy was enough to make any heart glad. Yet his father looked on his smiles with sorrow, for an old hag had foretold that this boy would be drowned before he grew up to manhood. The prophecy was:

Infant heir of proud Fermoy
Fear not field of slaughter;
Storm nor fire fear not, my boy,
But shun the fatal water.” 6

The young lord was kept from ever approaching Fermoy’s Blackwater River, and his caretakers never left his side. His father determined to avert the prophecy by building a new castle as far as possible from any body of water. “The top of Cairn Thierna was the place chosen, and the lord’s vassals were assembled and employed in collecting materials for the purpose.” But, tragically, a pail of water intended to quench the thirst of the workmen attracted the attention of the toddler. He saw his reflection on its surface, and knelt over the pail to kiss the young stranger. But he lost his balance, fell into the pail and drowned.

“The father, in despair, abandoned the commenced building. And the materials remaining there are a proof of the folly of attempting to avert the course of fate.”

This story may be read in its entirety here.

In Crofton Croker’s second tale set at Corrin Hill, a British officer is duped by the billet master and the local populace to trek up to the top of the hill to seek lodging in a non-existent manor home at its peak. The story is titled “Barry of Cairn Thierna.” 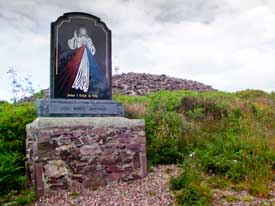 The last of the 14 Stations of the Cross encountered on the climb up to Cairn Thierna.

Barry was, in legend, a chieftain of old, who, it was said, “had become enchanted on the mountain of Cairn Thierna,” where his ghost was often seen by the peasants. The officer was told that Mr. Barry’s grand home was a good distance outside of town, so he went out at night to investigate the billet for his troops.

“The weary soldier gave a sigh as he walked forwards toward the mountain; but he had not proceeded far when he heard the clatter of a horse coming along the road after him, and, turning his head round, he saw a dark figure rapidly approaching. A tall gentleman, richly dressed, and mounted on a noble gray horse, was soon at his side, when the rider pulled up, and the soldier repeated his inquiry after Mr. Barry of Cairn Thierna. ‘Why, I’m Barry of Cairn Thierna, myself,’ said the gentleman, ‘and pray what ‘s your business with me, friend.’ ‘I have got a billet on your house, sir,’ replied the soldier, ‘from the billet-master of Fermoy.’ ‘Did you, indeed,’ said Mr. Barry; ‘well, then, it is not very far off; follow me and you shall be well taken care of, depend upon it.'”

“Mr. Barry” led the soldier to the top of Corrin Hill, where he was entertained in the grand parlor of a home of three stories, “with fine windows, and all lighted up within…” He was fed an excellent supper, and then plied with “whiskey punch” followed by an evening of conversation by the fire, and then by a deep sleep. But when he awoke he was staring up at the blue sky, surrounded by nothing but the pile of stones that is Cairn Thierna. This story may be read in its entirety here.

“Barry of Cairn Thierna” is not much seen today. The groups of day-hikers and joggers who climb to the top of Corrin Hill to enjoy the fine views have not reported seeing a phantom horseman leading them up to the summit. No troops have been seen marching to the top of the hill to be billeted in Mr. Barry’s mansion. But each New Year’s Eve the faithful recite the Stations of the Cross on the path up the peak, where the giant cross is illuminated at midnight.