“Athgreany in Wicklow is supposedly a group of dancers and their piper who suffered for… sacrilegious merry-making. The survival, from the most remote times, of other legends containing elements of truth suggests that folk-stories and names like these that tell of dancing in the rings may contain memories of ancient practices, a belief strengthened by the knowledge that dancing was part of the repertoire of prehistoric people in [Ireland and Britain].”

“It has been suggested by some writers that this may be a distant memory of actual ritual dances or games performed there by the builders. The idea is tempting, and the monuments would have been ideally suited to circle-dancing. But nobody who has studied the late Tudor and early Stuart campaign against profanation of the Sabbath can doubt that the sheer intensity of this may account for all the stories.”

Drag within the image to explore the Athgreany Piper’s Stones in virtual reality.
Click the red hotspot to change the point of view.

The green Wicklow Hills setting provides a serene background for this sad tale of merriment gone wrong, the piper and his dancers suddenly turned into blocks of stone because they were dancing on the Sabbath Day. This late Bronze Age (1400-500 BCE) monument consists of 14 granite stones, in a rough circle about 23 m (75.5 ft) in diameter. According to the legend these are the ossified dancers, some standing and some now lying flat on the ground. One larger stone, some 2 m (6.5 ft) high, stands outside the circle 36.5 m (40 yd) to the northeast, representing the piper in the legend. On some of the stones may be seen degraded megalithic art: grooves and cup-marks.3Writing for the Ordnance Survey in 1841, John O’Donovan reported that there were 29 stones in the ring, and that “there were, it is said, nearly as many more in number which were broken and carried away for the purpose of building.
“On the inside are lying in the ground two stones which are said to be ‘Women Giants’ transformed by ‘Druidical Art’. On one was visible the form of a face till it was for the most part effaced.” 4

No less than five different stone circles in Ireland have been given the name “Piper’s Stones.” There is one in a neighboring townland in Co. Wicklow, plus two in Co. Kildare and one in Co. Kerry.5 The story of the dancer and the piper turned to stone for their violations of the Sabbath is similarly widespread. There are nine such legends from France, and 26 from England and Wales.6 There are other groups of stones in Ireland, such as the Children of the Mermaid, in Co. Sligo, who are said to have been turned to stone for no infraction whatsoever.

One possible translation of the Irish name Áth Gréine is “Field of the Sun,” which might point to the use of the site for ceremonial purposes, since townland names can provide support for the associations between places and traditions.7 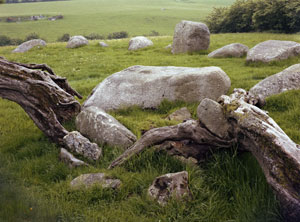 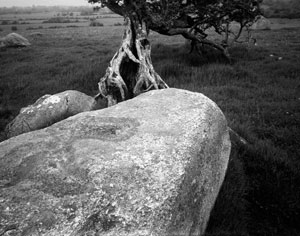 According to S. P. Menefee (1974), the folk legend representations of what may befall those who violate the Sabbath can be traced back to the beginning of Christianity. Those transformed into stones may have once been farm workers, sheepshearers, jousters, or hunters, all punished for their transgressions. “As early as 1584, John Norden mentions the Hurlers at Liskeard—athletes who were petrified for sporting on the Sabbath. In all such cases, breaking the Sabbath was considered a direct affront to God.” 8
Menefree suggests that the theme found in the Piper’s Stones story may also be noted in the records of sixteenth and seventeenth century witch trials. These trials often mentioned the role that dancing and music, and the ensuing sexual debauchery, played in the witches’ merriment. Thus the Piper’s Stones’ legend may have been a result of Church efforts to end pagan ceremonies still being practiced at the megalithic monuments.9 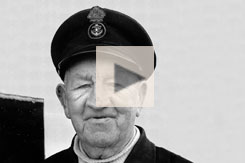 Tom Hutton talks of the power of the fairy thorn tree at a site in Co. Down.

An ancient gnarled hawthorn tree has been woven into the substance and myth of the stones for many years. The thorn tree, in legend sacred to the fairies who are the protectors of all such sites, would never be removed by anyone who wished to remain healthy (see video feature). Visitors to the site leave offerings of bits of cloth or other personal mementos hung on the branches of the tree, as they frequently do at Christian holy sites in the country.

In 1882 it was reported that these trees “cannot be cut without bringing ill-luck to the occupier of the land. A man near Kilmaganny, Co. Kilkenny came to me in a great state of mind one morning as the previous night someone had cut a thorn-tree in a rath on his land, and some ill-luck must come to him before the end of the year…before Christmas he buried a fine girl of a daughter.” 10

One modern author claims that the circle was an important element in the ancient celebration of Celtic festivals. Through the imposition of solar alignments upon the circle’s geometry she concluded that the stone underneath the hawthorn tree, which she labels the “Pilot Stone,” is the key to seeing the stone circle as an ancient calendar. “I drew a deep breath; my theory that the Athgreany Stone Circle was a marker for ancient days of importance was developing into a CONVICTION.” 11

Of course, with only 14 stones remaining from perhaps as many as 60 (if O’Donovan’s informant was correct), it is difficult to know if any solar alignments were intended by the circle’s builders. There is an image of the summer solstice sunrise over nearby Church Mountain here. There also may be an Equinox sunrise alignment from the outlier stone back over the circle to the V-shaped valley of Toor Brook.

The author of an 1899 journal article claimed ignorance of the legend that gives the site its name. “The name of ‘Piper’s Stones,’ so often applied to this class of monument, must have had its origin in some now-forgotten legend. The only explanation the old people give for the name is that ‘bagpipe music’ played by the good people, or fairies, is often heard at the spot.” 12 The notion of enchanted music heard emanating from a prehistoric site is treated elsewhere in the discussion of Ballyfounder Rath in Co. Down.