Posted at 19:41h in Completed, Earthworks, featured by Howard
Share

“I believe the concept of the well, spring or pool as a point of contact with the Otherworld arises out of its physical characteristics – it goes down into the ground, emerges from it, or offers a mirror of the real world in its surface.”

“The tradition of the wishing-well, a combination of sacrifice and natural place designed to bring good fortune to the giver, has been the last incarnation of the water hoards of prehistory.”

Ronald Hutton, The Pagan Religions of the Ancient British Isles, 1991 2

Drag within the image to explore the King’s Stables in virtual reality.

Not a naturally-occurring water feature such as a holy well, this artificial pool was dug out and allowed to fill with water to create a ritual site sometime in the first millennium BCE. There is no other site like it in Ireland, although there are parallels from Britain and the continent. It may have been constructed as an adjunct to ritual activities at the nearby Navan royal site (Emain Macha), a half mile to the ESE. Or perhaps it was connected to Haughey’s Fort, the Bronze Age enclosure just up the hill from the pool. The King’s Stables is a remnant of a “water cult” in which offerings were made to the gods by throwing objects down into the cold murky depths of the pool.

The King’s Stables was so named long after the original purpose of the pool had been forgotten in antiquity. The name, identical to that of a site on Hadrian’s Wall,3 reflects a local tradition that the legendary Iron Age kings of Ulster used the pool to water their horses and wash their royal chariots.

“The heroes in the tales fight with swords from the Viking age, not the Iron Age. They ride in chariots, which are well attested in the early Christian centuries but not from those before.” 4

In the small lake next to Navan, Loughnashade (Lake of the Treasures), around 800 meters (half a mile) to the east of the King’s Stables, a spectacular quartet of Iron Age trumpets was discovered.5 But a partial excavation of the Kings’ Stables in 1975 yielded more mundane discoveries. The most significant of these may have been 18 pieces of clay moulds, used for casting leaf-shaped bronze swords. Also found was the facial segment of a human head, intentionally removed from the rest of the skull.6 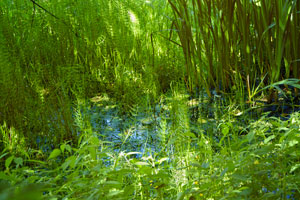 Offerings may have been made by dropping items into the pool to deliver them into the spirit world.

The excavators were able to explore only 5% of the area of the King’s Stables, extending just two exploratory trenches into its interior. It was determined that the 25-meter (82-feet) wide pool was intentionally dug out of the surrounding land. Its flat bottom is more than two meters (6.5 feet) in depth. Over the roughly two thousand years since it was dug it has become choked with floating vegetation. Under that is a layer of fibrous peat. The surface may in places look solid enough to walk upon, but that would be a mistake, as it is treacherously unstable, and a wrong step might dump you into turbid water over your head. 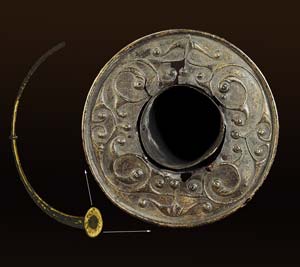 The Loughnashade Horn was found in a pond near the King’s Stables (National Museum of Ireland). Listen how this horn may have sounded.

The bank remaining on the south side of the pool, 3.5 meters (11.5 feet) above the water level, was created by the spoils from the construction of the pool. While it may once have been carefully manicured as a platform for the performance of rituals, today is completely overgrown, covered mostly with wild cherry trees which make a dazzling display each spring.

Also found at the bottom of the pool were bones of cow, pig, sheep and red deer. The excavation report raised the possibility that these may have accumulated over the centuries from animals that had become trapped in the jumbled interior of the pool.7 The unusually high proportions of dog bones and deer antlers, however, suggested to the archaeologists something else: were the dogs deliberately thrown into the pool as a part of a ritual observance? The skull of a very large dog, about the size of a small wolf, was found nearby at Haughey’s Fort, the largest dog remains ever found from any prehistoric site in Ireland or Britain.8

Excavation of the site was not an easy task for the team of C. J. Lynn, a Northern Ireland government archaeologist, and the crew of four workers and five students:

This work posed many problems, chiefly the ever-present water which had to be continuously pumped out…So much water was locked up in the higher layers that the entire mass of mud and peat tended to flow bodily into the trenches and close them up. Shoring became imperative and even this bracing eventually showed signs of failure. Another problem was the constant tendency of the pump nozzle to clog with fibrous material and large water-beetles.9

There might have been other clues as to the ritual content of the King’s Stables and Haughey’s Fort sites, but some have been unfortunately destroyed. There was a report in 1910 of the landowner admitting that he uncovered “a large stone with some unknown characters inscribed on it,”10 but since he could not remove it from his field, he blew it to bits.

In local folklore, an attempt to drain the site by the landowner in the early twentieth century was thwarted by the appearance of a supernatural beast, a fearsome dragon:

“…there the kings of Ulster in the old days, watered their horses and washed the chariots like. Well, my boy O’Toole thought he would drain the water away. And he started to cut the bank and it’s so lovely and round it was a pity to destroy the shape. But bedad, it’s a little digging he did for up popped the dragon so big the water could hardly be seen for it. And it’s spitting something awful and its eyeballs wicked with fire. But sure that’s all he knows about it, except that he’s not the same man since. Ay, and for many a long day after, he took to his bed.” 11

The local workmen assisting the excavators in 1975 told them that the dragon was known to have also appeared in recent memory. The legend further asserts that the King’s Stables pool has a subterranean passage connecting it to the fabled Hag’s Lake on the top of Slieve Gullion, more than 30 kilometers (18.6 miles) to the southeast. To visualize this story, we’ve created a hotspot in the virtual-reality environment (top, left) that will link the two sites.

As the informational sign at the King’s Stables (somewhat breathlessly) proclaims:

“You are standing in what was clearly a sacred landscape in prehistoric times. This mysterious place still contains in its depths a mass of evidence for activity some 2500 years ago. Who knows what bizarre, even horrific, rites were carried out here? the answers may well lie at the bottom of the pool.” 12