“It seems likely that the kind of blarney [early] British travel writers recorded was not pure invention on their part, although they no doubt embellished it. A bit of stage Irishry often marked the guide’s performance—expected and, therefore, delivered. Given the social inequalities that characterized Irish tourism, the roles of host and guest helped to shape and structure the exchanges among strangers. The guides’ patter, complete with brogue, was part of the service he was selling, and most travel writers seem to have been impressed and often pleased with the ability of their Irish guides to cut through ethnic and class barriers and establish themselves as personalities.”

Drag within the image to explore Rathgall Hillfort in virtual reality.

The 19th-century blarney depicted by travel writers in Ireland has not entirely gone out of style. Some of the stories collected for the Voices from the Dawn project may have originated in a book of folklore our informant read in his schooldays. The stories he remembered and repeated for our microphone may have been collected in the 19th century by some ill-prepared Englishman with suspect motivations. In some situations, lubricated by a couple of pints of stout in his neighborhood pub, an informant might concoct folklore on the spot, made-to-order for what he may presume to be your specifications.

Nowhere was this phenomenon more evident than in the recording session in the Tobinstown Inn one evening in June of 1979 (see video, below right). Our informants that night, Tom Kelly and Christy Owen, delighted in the competitive spirit, each trying to outdo the other in spinning the more outrageous tale of the Ring of the Rath. With enough snippets of traditional folkloric elements inserted to maintain an aura of authenticity, their stories of the fort that night ran the gamut from fairy enchantments to fertility enhancements.2 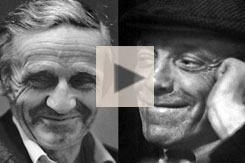 In a bleary-eyed pub conversation, Christy Owen and Tom Kelly use their Guinness-fueled gift of gab to concoct stories about the Ring of the Rath (1979).

The Rathgall Hillfort was excavated in the early 1970s by archaeologist Barry Raftery, Raftery produced the first scientific report of an Iron Age hillfort’s excavation when he wrote in 1969 about the 1948-1949 work at Freestone Hill (Co. Kilkenny) after the death of that site’s original excavator. Unfortunately Raftery himself died in 2010, before he could finish his own text on Rathgall.

In a pre-publication report, Raftery described the fort with its outer three concentric stone ramparts, enclosing a fourth wall of later, probably medieval construction. The outer three walls likely date to the late Bronze Age, but may have been constructed in different phases. The total area of the fort is 7.3 hectares (18 acres). A large quantity of artifacts, including glass beads, bronze and clay mould fragments, and potsherds were found. One of the most spectacular finds was a gold-plated copper ring, found with deposits of burnt human bones. An urn contained the cremation burials, all placed in a stone-lined pit, was once surrounded by a mass of wooden stakes.3 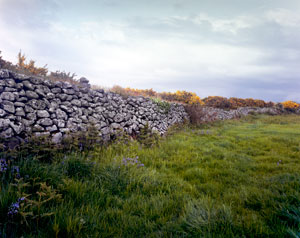 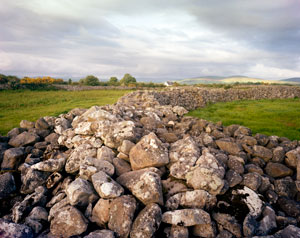 After its initial prehistoric period of occupation the site was abandoned for as long as a thousand years. During the second or third century CE an iron-smelting industry developed at the site, where a millennium earlier weapons of bronze were cast.4 A 1911 report describes a stone circle located across the road from the fort, “The place has all the appearance of a pagan burial-ground, and there is a living tradition that it was “the place where the King of Leinster was buried.”5 This stone circle has been subsequently destroyed, as we could locate no trace of it.

The same 1911 journal article explains that the locals did not refer to the fort as “Rathgall” (Rath Geal, “the white, or bright fort.”) Rather, it was then known locally as the “Ring of the Ra[th].” This is the same appellation that our voluble informants in the Tobinstown Inn used in 1979. These wonderfully imaginative stories, which continued much beyond what is in the edited tapes (above right) presented here, included:

The last item was made even more specific to the excavator of Rathgall:

“I know hundreds who went to the Ring of the Rath, and anyone who come out there was a baby born! Now that’s right. I’m not joking. And I’ll tell you another thing. If you never was married and was even in the Ring of the Rath for one hour, definitely you a going be married inside of two years. Yes! Barry Raftery, that was from Dublin, he was digging around in that place – an archeologist – he wasn’t married and he spent one summer in that place — that’s true now. And he was married by Christmas. And he had no plans, no hope of getting married, nothing else. And he was married by Christmas after!” 6

American folklorist Richard M. Dorson first used the term fakelore in 1950. As an example, Dorson explained that the fictional cowboy “Pecos Bill” was actually an invention of a writer in 1923. Similarly, the tales of Paul Bunyan were largely invented by an ad copywriter working for a lumber company.7 Today, many folklorists are more accepting when literary sources influence oral tradition, recognizing that the interplay between the written and the spoken word has occurred for thousands of years.

And then there are such blatant forgeries as the notorious hoax Lebor Feasa Runda, a purported translation from German of a supposedly lost ancient Irish text. Only certain white-supremacist groups who take comfort in its racial theories embrace this self-published book, whose author attempted to buy a Lordship for himself in Scotland. It has been thoroughly critiqued by academics such as Dr. Phillip A. Bernhardt-House, who coined the term flakelore to describe this work.8

The bleary-eyed conversations we recorded about the Ring of the Rath—with elements of genuine folk tradition sliced and diced for a tourism presentation—may fit into another category, that of folklorism, “The use of material or stylistic elements of folklore in a context which is foreign to the original tradition.”9

In their 1841 travel guide to Ireland, the Halls tell of a folkloric hoax perpetrated on two English visitors who wanted to witness a traditional, very rowdy, Irish wake. The entire spectacle was, for “a promise of whiskey enough to make the party merry,” recreated for the entertainment of the gullible tourists.10 Writing of his own trip a year later, William Makepeace Thackeray was amused to discover that some earlier writers were intentionally misinformed. He described “the glee with which a gentleman in Munster told me how he had sent off MM. Tocqueville and Beaumont ‘with such a set of stories.’”11

The authors of the early books about touring in Ireland often provided a warning to their readers that a native guide may not provide the most trustworthy information. In The Miseries and Beauties of Ireland (1837) Jonathan Binns complained that his guides never hesitated “…to make the most confident assertions on matters which they are perfectly unacquainted.”12 Thackeray described one style of Irish conversation in 1842:

“He was a handsome rogue, a poacher, or salmon-taker, by profession, and presently poured out such a flood of oaths, and made such a monstrous display of grinning wit and blackguardism, as I have never heard equaled by the best Billingsgate practitioner…. Blessings, jokes, and curses trolled off the rascal’s lips with a volubility which caused his Irish audience to shout with laughter, but which were quite beyond a cockney. It was a humour so purely national as to be understood by none but natives, I should think.” 13 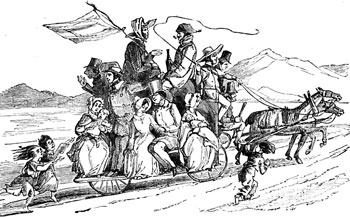