Posted at 07:06h in Completed, Stone Circles by Howard
Share

“Our space travelers see beings making stone tools…A strange sight to greet our astronauts! But what do the primitive beings on this planet think about the monstrosity that has just landed there and the figures that climbed out of it?…Until this day they have worshipped the sun and the moon. And now…the gods have come down from heaven!
…
A few specially selected women would be fertilised by the astronauts. Thus a new race would arise that skipped a stage in natural evolution.
…
While our space-ship disappears again into the mists of the universe, our friends will talk about the miracle…turn it into a saga to be handed down to their sons and daughters…They will hammer and chisel in the rock pictures of what they had once seen…”

Drag within the image to explore the two Kealkil Stone Circles in virtual reality.

Erich von Däniken’s series of best-selling “non-fiction” titles began with Chariots of the Gods? (1968) and continued with 16 other books (in English) including Twilight of the Gods—The Mayan Calendar and the Return of the Extraterrestrials (2010). These books all feature his recurring theme: that the gods of our earliest ancestors were actually visitors from outer space, and that many ancient stone monuments and artworks were constructed by the aliens, or as documentation of their visits, or actually as beacons to guide in the spaceships to a safe landing on earth.2

With its hilltop location, 137 m (450 ft) over Bantry Bay, the Bronze Age Kealkil Stone Circle would have been a good candidate for one of von Däniken’s rocky space beacons. Its tallest stone, before it was broken, was nearly six m (20 ft) tall. The monument is not merely a stone circle, as it also contains a stone pair, and a radial-stone cairn. Across the road, and 400 m (1,313 ft) to the southwest, are the remains of another large stone circle.3 A hotspot links this to the main Kealkil circle in the virtual-reality environment (left). When it was excavated by S. P. Ó Ríordáin in 1938, the only finds reported were some pieces of scallop shell, one of which may have been intended for an arrowhead. However, an earlier, non-scientific report in 1897 found evidence of two cist burials just outside the circle.4

After its excavation, the archaeologist discovered just how difficult it must have been for the original creators of the monument to set the largest monolith in place:

“The handling of a stone of this size is a matter of some considerable difficulty and its erection increases our respect for the prehistoric builders of the monument. In the course of the excavation we decided to replace the prostrate stone in its original socket and in the carrying out of this operation we came to realize the difficulty of raising such a stone…although we had the advantage of the use of pulleys and tackle, presumably not available in its original erection.” 5

Professor Ó Ríordáin goes on to observe that the original builders must also have had “trestles [scaffolds] or some such device” to enable them to lower the stone directly into its socket, since the excavation uncovered no evidence of a ramp that might have allowed the builders to slide the giant stone into its small socket in the ground. On the other hand, instead of a scaffold might they have had the assistance of a tall extraterrestrial?

Erich von Däniken was not the first to suggest a connection between ancient monuments and visitors from outer space. His work depended heavily on the musings of earlier authors.6 Afterwards, others contributed to the theme, such as T. C. Lethbridge in The Legend of the Sons of God, (1972), who said that prehistoric peoples, eager to attract the “gods from the sky,” built their stone circles as enticements for the visitors from outer space. Lethbridge imagined the Neolithic men dancing around the stones, and in their arousal, transferring psychical energy to the stones for the extraterrestrials to use for a homing beam:

“… ..the heat engendered by numerous excited human bodies, dancing in a ring with interrupted spacing of stones around it, could act as a human dynamo. The purpose then of the ritual dancing was to store this bio-electronic current. The practical purpose of the dance would in time, by frequent repetition, slowly change into a ritual one; of which the original cause was no longer remembered, if it was ever known.” 7 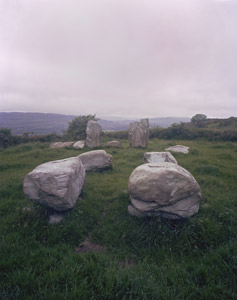 Click on the image to see part of the Kealkil outlier circle in high resolution.

John Mitchell, in The Flying Saucer Vision (1967), suggested that Stonehenge, which (he said) from the air looks like a flying saucer, is actually “a sort of cargo cult monument, a pattern of the sacred disc, built to attract this object for which men felt such a yearning.”8

The basic premise of von Däniken and the others is that our ancient ancestors were simply too weak and ignorant to have been able, all on their own, to construct the impressive monuments that are their legacy. Rather, they insist that it is more logical that the prehistoric Irish were aided by little green men from “out there,” since the other green men, the fairies, seemed to have left the playing field.9

Erich von Däniken, working as a hotel employee, was in the news prior to the time he gained international prominence as a best-selling author. He was convicted of embezzlement and fraud in his native Switzerland, and sentenced to three and a half years in prison for falsifying the hotel’s books. It was during this interlude as a guest of the Swiss judiciary that he authored his second best seller, Gods from Outer Space.10 His legal travails, ultimately, will be of no concern to oral tradition or the folkloric record, as von Däniken’s ancient astronauts have entered the public consciousness and will remain there in one form or another.

His penchant for falsification caused further embarrassment, although it never seemed to affect the sales of his books, even when it became clear that he had invented key details and greatly exaggerated many others. “I admit,” he said, “it’s a theory – a speculation.”11 His only evidence to back up his theories, comes, ironically, not from rocket science but from the folktales of several cultures and from the Bible. His grand proof, yet to be found, is that the ancient astronauts may have left a time capsule somewhere, waiting.

Stanley Kubrick was swimming with the same Zeitgeist tide in 1968 when the chosen ape in 2001 A Space Odyssey reached out to touch the alien monolith outside his cave. But Kubrick, while he may have inspired his own cultural meme12 never claimed that that his film should be considered a documentary. A column in The New York Times Book Review (1974) considers von Däniken and the “astro-archaeology” phenomenon:

“Von Däniken’s books provoke the childish question “Where did I come from?” Just as children sometimes fantasize that the man and woman they have been stuck with could not possibly be their real father and mother, so in a non-religious age in which technology is god von Daniken packs God the father off to the senior citizen’s home and substitutes shiny, new-minted astronaut father-figures. …one childish fantasy is substituted for another.” 13

The tallest stone of the Kealkil Circle, compared with the monolith from the film 2001 A Space Odyssey (© 1968 Turner Entertainment Co.).

In an interview with the National Enquirer, von Däniken described his fourth-dimensional experiences in a world that he called “Point Aleph,” where, he revealed, “time doesn’t exist.” He said that his certainty regarding the ancient astronauts stemmed from the fact that he was there when the astronauts arrived, and therefore he knew that they’d be returning.14

Rather than wait patiently for that day to arrive, von Daniken in 2003 opened the “Mystery Park” entertainment complex in Switzerland, complete with reproductions of “ancient astronaut” artifacts. It included the “Megastone” pavilion, with an ersatz Stonehenge, presented as an example “of the gigantic structures made in the remote past by – so called – primitive people.” The park’s website proclaimed:

“This theme park presents the unexplained, yet real phenomena found in various historical and archeological sites around the globe. Since the opening day on May 24th, 2003, the theme park enjoyed a high number of visitors from all over the world. State-of-the-art technology is applied in the various pavilions to bring the astonished visitors to a close encounter with real mysteries. The 1,000,000th visitor is expected in 2005. Already now, negotiations have commenced to design and built similar parks in North America, Thailand, Singapore and the United Arab Emirates.” 15

Unfortunately for von Däniken, the millionth visitor never arrived, and the park, with its static exhibitions and its one-sided view of controversial ideas, went bankrupt and shuttered its portals in 2006. Investors, including some of the author’s fans who bought low-value shares in the park, lost all their money. The park’s closure was noted by a headline in a Swiss newspaper, “Mystery Park Needs Extraterrestrial Saviour.”16

Any attempt to access a page that is missing at the former von Däniken park’s website, will be met by Erich von Däniken himself, pointing to the hieroglyphs on an ancient column on which the numbers “404” have been digitally added, explaining (in German):

“Page not found
Aliens have kidnapped this page!
Dear visitor, dear visitor, the page you are seeking may not exist, or a typing error prevented its loading. This is the so-called 404 error.
If you used a search engine or a link, the page still may exist, but may be found in a different location now, in a strange space-time continuum or in hyperspace.”