Posted at 01:39h in Completed, Stone Circles by Howard
Share

“Six women of their nobles were their losses on the sea and land from their setting out from Spain till then. These are their names; Buan wife of Bile; Dil wife of Donn; Scéine, the woman-satirist, wife of Amergin White-Knee. She died with them on the sea while they were coming to Ireland; so that Amergin said, “The harbor where we land, the name of Scéine will be on it”. That was true, for from her is named Inber Scéine.”

Drag within the image to see the Eightercua Alignment in virtual reality.
Click the red hotspot to see the aerial view, in which the ritual enclosure may be noted.

The Eightercua Alignment looks west to Ballinskelligs Bay and the open ocean. To the east is Lough Currane and then the mountains of the Ring of Kerry. The mound on which it sits was likely a ritual enclosure destroyed by road-builders more than a century ago, its meaning long forgotten. The tallest of the four stones is 2.7 m (9 ft) high. The alignment stretches east-west, pointing from lake to ocean for 7.6 m (25 ft). The monument is estimated to be from the Bronze Age, c. 1700 BCE.2

In Irish mythology the four stones mark the burial spot of Scéine, the wife of the Milesian bard-magician Amergin. She died at sea just prior to the landing of the invasion force come to wrest Ireland away from the Tuatha Dé Danann. Amergin named the bay here Inber Scéne in her honor.3 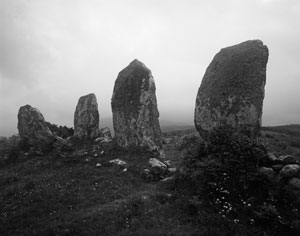 Click on the image above to see it in high resolution.

This tale is from the Lebor Gabála Érenn (The Book of the Taking of Ireland) more commonly known as The Book of Invasions. Dating from the eleventh century CE this collection of poems and stories recounts an epic mythical history of the Irish people from the biblical creation up to the Middle Ages.4

Just down the road to the south of this monument is the Baslicon Dolmen, also connected in legend to this invasion story.

In local lore there are other stories told of the origin of the stone alignment. Schoolteacher Michael Dineen, in a 1979 audio interview (below left), said that the stones were a memorial to children lost in a fire a thousand years earlier. His neighbor Michael Moriarty claimed that from the position of the standing stones you can spot two other groups of stones across the lake. From the stories collected by schoolchildren interviewing their elders in a 1937-38 government project, one local man reported that the stones were “…supposed to have been built by a blind Firbolg and his wife in one night.”5 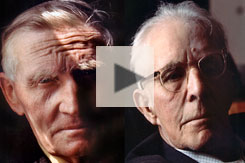 Michael Dineen and Michael Moriarty discuss the local lore of the Eightercua Alignment.

While there is only faint evidence to be seen now, at the end of the nineteenth century there were sufficient stones remaining for an antiquarian to fully describe the ritual enclosure with the Eightercua Alignment at its apex. See the diagram, below right, and the aerial view within the VR environment at the top of the page. The investigators considered the enclosure to be the principal unifying monument of the site, which also included the ruins of a small church, called Templenakilla, and other building foundations beneath the hill of the stone alignment.6

The partial excavation of the enclosure described in 1902 by P. J. Lynch revealed evidence of a roughly circular wall structure, with a diameter of approximately 15.2 m (50 ft), with what may have been a ceremonial entrance. He also determined that a stone standing on its edge was the support for an “altar-table.” It was clear to the investigator that stones had been removed and the rampart leveled. One of the standing stones showed evidence of an attempt to quarry it for another use.7

“The stone to the right appears cut through horizontally near the base for nearly one half of the breadth. I am informed that the contractor who was building the bridge over the Currane river, close by, some years ago, took a fancy to these fine stones, and had gone so far in securing a portion of this one, when fortunately he was stopped. This must have been the vandal who removed the wall of the enclosure, and possibly the altar-slab as well.” 8 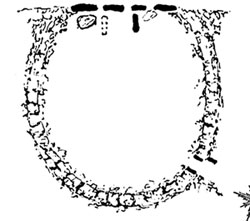 In The Book of Invasions the widowed Amergin used his powers to compose a magical incantation to the spirit of Ireland. His words enabled his fleet to make landfall here on the shore of Ballinskelligs Bay, at the bit of land he named after his beloved. His invocation came to be known as The Song of Amergin. It begins….

In 1999, Irish poet Paddy Bushe imagined how the spirit of the deceased wife might have responded to Amergin’s lyrical phrases. The poem is entitled Scéine’s Reply to Aimherigin.

“If you are the wind on the sea
I am the water tingling under the breeze.
If you are a wave in a flood
I am an empty shell dreaming of your coming.
If you are the roar of a storm
I am the tide lapping in the noon heat…” 10