“Throughout past ages, when other and later monuments have been destroyed, they remain guarded by unknown but dreaded beings…It is noteworthy that these former objects of the peasants’ veneration were erected by an early wave of population. It may be suggested that their preservation by means of veneration for traditional beliefs points to the continued influence, up to a very late date, of their builders.”

Drag within the image to explore nine different views of Dunbeg Fort in virtual reality.
An interactive map will appear when you click the button to enter full-screen mode.
Touch here for the mobile version. Touch here for the HMD version.

In 1910, antiquarian T.J. Westropp called Dunbeg “the most complex and remarkable of the Irish promontory forts.”2 While its first earthen defenses were begun in the Iron Age, Dunbeg was occupied during times of peril until at least the 11th century. That it has survived so long afterwards may be due in part to the prohibitions in local folklore on any interference with ancient remains. As Lady Gregory put it in 1920, “those tribes still protect their own.”3

Sheer cliff walls on the east, south, and west guard Dunbeg Promontory Fort, perched on the northern end of a narrow ledge over the sea on Co. Kerry’s Dingle Peninsula. Its remarkably picturesque setting presents the visitor with a view of the Skellig Islands at the southern horizon; and, peering down over the protective fencing, a view of the roiling waves of the Atlantic some 28 m (92 ft) below. The fort has not made it to the present day without significant changes, as the same ocean that protected its inhabitants on three sides has eaten away at it from below. More than a thousand years of furious winter storms have slowly devoured the cliff edges supporting the fort and have sent one end of the stone rampart crashing down into the ocean.

In his 1898 article on his visit to the fort, antiquarian P.J. Lynch noted:

The sea is encroaching on this coast. On portions of it, to my own knowledge, as much as from eight to ten feet of land has disappeared within twenty years. Last year [1897] a portion of the western end of the fort wall fell away…4

In late January 2014 furious coastal storms again attacked the cliff at the western edge of the fort and caused a significant section to fall away, perilously close to the passageway through the stone rampart. This has effectively closed the monument to further public access. Another storm early in 2018 may have sealed the fate of Dunbeg. In this before-and-after VR scene, you can see the how the western end of the fort is almost entirely gone. Click on the red hotspot to switch to the 2013 view from the same position. This scene may also be viewed in a HMD version. An astonishing 3D model of the storms’ destruction may be viewed here.

An earlier (2001) VR of the western end of the fort interior may be seen here. There is also a version of the tour optimized for use in a head-mounted display (HMD), such as Google Cardboard or Oculus Rift, available here. Learn more about HMD VR here. 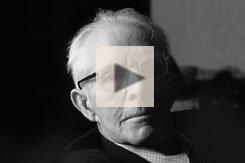 According to Michael Moriarty, the paths used by ghosts must never be blocked (1979).

The original appearance of Dunbeg was further modified by a poorly planned and barely documented Board of Works restoration completed in 1893.5 At one time the main stone defenses of the fort extended outward to the edges of the cliff. After the restoration both walls were made to curve inward from the cliff edge.6 The present length of the rampart wall, approximately 29 m (95 ft) is around half of what it was when first measured in 1856. The western end of that wall is now lost, and, unless the authorities intervene, the entire structure will one day follow it into the Atlantic.

Because of its location at the cliff’s edge, archaeologists classify Dunbeg as a “promontory fort.” Similar monuments include Dun Aengus in the Aran Islands and Caherconree, a mountaintop version of the promontory fort at the eastern reaches of the Dingle Peninsula. Dunbeg consists of four outer defensive banks of stone and earth, with five intervening ditches (fosses). If a threatening group had breeched these defenses, they would have found themselves 3 m (10 ft) below the top of the 6 m- (20 ft-) thick stone rampart of the inner fort. The entrance passage through this rampart features two small, corbelled stone “guard chambers” on either side. Within these, the fort’s defenders might have hidden, waiting to thrust their spears at any invader. The two guard chambers were entered from small crawl-space openings on the inside wall of the stone rampart, noted in the virtual-reality tour. A wooden bar which closed the entrance door extended into the chambers, allowing entry to the fort to be controlled by the person in the guard chamber.

The high-resolution photograph (below left) was made with a large-format view camera in 1979. Click the photo, and then click the button at the right of its Zoomify toolbar to see it full-screen. 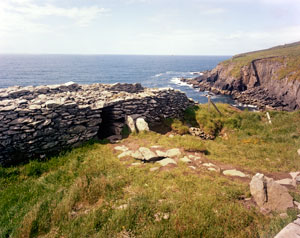 Beyond the stone rampart was the living space for the fort’s inhabitants, a clochán (stone hut), round on the outside, but with a rectangular interior space. While other examples of clochain, such as those on Skellig Michael have corbelled dry-stone roofs, the wider space (7.5 m or 24.6 ft) of Dunbeg’s clochán contained small wattle shelters with thatched roofs.7

As a final measure of Dunbeg’s defenses the fort’s inhabitants could make their escape through a dry-stone underground passageway, or souterrain, which begins beneath the fort’s entrance doorway, and extends to the outer ramparts 16.5 m (54 ft) beyond. The tunnel is roofed with large slabs that are supported by the tops of the stones of the side walls. The souterrain, initially constructed in a trench, would have been covered with earth and stones when completed so as to make it invisible from above. This top covering is now partially removed. Parts of it may be seen in the video, above right.8 Visitor access to the Dunbeg souterrain is not available, but a similar structure, the Binder’s Cove Souterrain in Co. Down, may be explored virtually in Voices from the Dawn.

Michael Morierty, an older Co. Kerry gentleman interviewed in 1979, felt that ancient structures, and souterrains in particular, were the haunts of the dead, who would travel there by night. Hear the entire interview in the video, above right. Mr. Morierty felt strongly that such places should remain undisturbed:

I wouldn’t like to haul down any of the old things that was built by them. Like the underground places of escape. There’s a lot of them in Kerry…I wouldn’t go in there if you’d give me two million.9 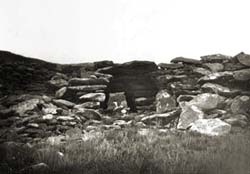 The oldest known photograph of Dunbeg Fort was taken by Lord Dunraven in 1875. Shot from inside the fort, it shows the rubble from the partially collapsed wall.

All the main features of Dunbeg Fort—the souterrain, the exterior banks and ditches, the stone rampart wall, the clochán, and the guard rooms—may be viewed in the virtual-reality environment. Some of the details are identified with information hotspots. The interactive navigational map (visible when the VR tour is viewed full screen) was adapted from T.J. Westropp’s 1901 diagram of the fort.

Archaeologists have found few, datable, occupation remains at Dunbeg, nor at most of the other Irish promontory forts. The refuse pits and other evidence of human habitation at such forts are notable by their absence. This, of course, is to be expected: why would the prehistoric inhabitants of a promontory fort bury or burn their refuse when it was far more convenient to simply toss it over the edge of the cliff?

During his 1977 excavation of the fort, archaeologist T.B. Barry found evidence of a ditch, now covered by the stone rampart, which gave a calibrated radiocarbon date from the eighth century BCE. This was the first evidence of a man-made construction there, suggesting that the ancient predecessors of Dunbeg’s later occupants also noted the defensive potential of the promontory.

The next datable evidence, collected at the base of the first rampart ditch, was from the eighth or ninth century CE. The clochán provided evidence of two distinct layers of occupation, both from the end of the 10th century CE. There is no evidence that Dunbeg was ever again occupied after the early 11th century.10

Who were the inhabitants of Dunbeg? The lack of physical evidence to connect the fort to a particular group has prompted authors to make educated guesses. Most have imagined a local population of farmers, retreating to the promontory fort when threatened. Author Steve MacDonogh, however, writing in 2000, had a different idea:

“It is, of course, possible to speculate and many people have, suggesting that such forts were the last bolt-holes of a people in retreat from Iron Age invaders. It has also been suggested – and this seems more likely – that they were the first fortified footholds of the invaders, from which they advanced to control the area.” 11

Dunbeg (An Dún Beag) means “the small fort.” This name most likely originated to distinguish it from another promontory fort some 5 km (3 miles) to the west, An Dun Mor (“the large fort”). Unfortunately, all the folklore prohibitions on interfering with ancient monuments were unable to protect An Dun Mor. In 2004 the landowner leveled some 700 m (2,300 ft) of its earthen ramparts with an excavating machine and removed an inscribed standing stone. A Heritage Ireland spokeswoman called this “a dreadful act.”12 Although no one bothered to find out what the protective fairies and ghosts had to say about it, it might be wise for the landowner and his family to lie low for the next few generations.