“In all the ancient Irish literature we find the connection of the gods…with the raths and cairns perpetually…insisted upon. The scene of the destruction of the Firbolg will be found to be a place of tombs, the metropolis of the Fomorian a place of tombs, and a place of tombs the sacred home of the Tuatha along the shores of the Boyne…The connection between the great raths and cairns and the gods is never really forgotten…No one can peruse this ancient literature without seeing clearly the genesis of the Irish gods: violent heroes, passing, through the imagination and through the region of poetic representation, into the world of the supernatural…”

Drag within the image to explore the Dowth Passage Tomb in virtual reality.

Dowth means “darkness.” And darkness is what remains for the visitor today (2011). The electricity has been turned off; thus the artificial lighting, installed when the tomb was open to the public in the 1970s, is no more. The structure has been deemed unsafe, and entrance is now generally prohibited.2 But its ancient name did not come from a lack of a light bulb. In legend, Dowth was named from the darkness that fell on it when the king and his sister committed an unforgivable act.

The passage tombs located in Co. Meath’s Boyne Valley, just upstream from the site of the 1690 Battle of the Boyne, were constructed in a several-century period by an agrarian people showing “the marks of the civility of a group of townsfolk living in a close-knit community.”3 Dowth can be considered the poor relation of the three magnificent Neolithic passage tombs located at the Brú na Bóinne (Palace of the Boyne) necropolis. It is not on the route of the guided tour that begins at the visitor’s center. It has never had a modern archaeological excavation. And, unlike Newgrange, its spectacular sister tomb up the road, there are not the multitudes of visitors from all over the world waiting in line for a brief opportunity to enter the site. Visitors to Dowth arrive on their own, pay no entrance fee, and take as long as they like to walk around this communal tomb constructed five thousand years ago. In the VR tour (left) the telephoto view from the top of Dowth will allow you to be virtually transported to the top of the Newgrange mound.

The Dowth the visitor sees today has, sadly, been much diminished by a misguided nineteenth-century attempt at a “scientific” excavation. Though originally twice as large, the mound today is still immense: about 15 m (50 ft) high with a diameter of 85.3 m (280 ft). Some of the 115 kerbstones can be seen at its edge. Of these, 15 have rock-art ornamentation, including one (#51) called the “Stone of the Seven Suns.” While only four of these stylized solar symbols show clearly in the close-up of the stone in the VR tour, all seven may be noted in the illustration in the gallery at the bottom of the page.4 A few kerbstones, including #51, may be viewed using the hotspot in the virtual-reality environment (above). Within a rather small part of the western side of the mound (see schematic, below right) were found two passage tomb chambers, plus a souterrain from the Iron Age. Both of these chambers may be explored in the laser scan fly-through video completed by David Strange-Walker and Marcus Abbott, below right. There may also be a yet-undiscovered major burial chamber awaiting a modern archaeological investigation.5 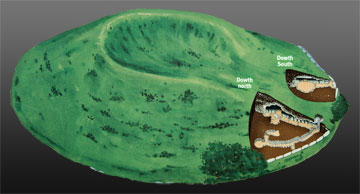 The northern of the two known tombs has a passage of 8.2 m (27 ft) leading to its cruciform chamber, which has a low-corbelled stone roof. A large ritual basin stone, which perhaps once held the cremated bones, was found. There are three funerary recesses, plus two more in an annex off to one side (see diagrams in gallery, below). The passage of this tomb connects to the Iron Age souterrain, leading to the western edge of the kerb. The southern tomb, 25 m (82 ft) distant, is smaller, with a 3 m (10 ft) passageway, illuminated by the setting sun of the winter solstice.6 It features a round chamber, with only one recess, that has been given a replacement concrete roof.7 A padlocked 1880s-era entranceway, a rusting iron cage with a ladder leading downward, once allowed access to the larger tomb.

The souterrain, a tunnel-like refuge built into the kerb at the westernmost perimeter of the Dowth mound, was a late (c. fourth century CE) modification to the tomb. By the time it was built, Dowth had already served as a cemetery and ritual site for more than three millennia. At the nearby Knowth passage tomb, Iron Age activity included additional burials in pits outside the mound, as well as the construction of a large ring-fort settlement beside the tomb. The community there likely was building upon the prestige and long-term sacredness of the Knowth site. Perhaps the souterrain at Dowth was also constructed as a part of a larger Iron Age habitation complex. As George Eogan asked,

“…why was Brú na Bóinne selected [for Iron Age domestic sites]? Perhaps, in view of its former greatness, an aura of sanctity or a tradition about its prominent past lingered on. If Celtic society was expanding, it might have been advantageous to take over a hallowed place, as it could have added to the importance and status of the settlement.” 8

In time, its purpose and its sanctity faded from the communal memory, and different civilizations came and went. Dowth then endured much abuse in the centuries before it was put under state care. In the ninth century, the Brú na Bóinne tombs were plundered by invading Norsemen, who were well aware that the mounds contained “caves” (passage tombs), where they believed treasure was to be found. The Annals of Ulster, a late fifteenth century manuscript, records that Douth was targeted in 862 CE:

“The caves of Achad Aldai, and of Cnodba, and of Boadán’s Mound above Dubad [Dowth], and of Óengoba’s wife, were searched by the foreigners—something that had never been done before. This was the occasion when three kings of the foreigners, i.e. Amlaíb and Ímar and Auisle, plundered the land of Flann son of Conaing; and Lorcán son of Cathal, king of Mide, was with them in this.” 9

The high-resolution photographs below were made with a large-format view camera in 1979. Click the photo, and then click the button at the right of the Zoomify toolbar to see it full-screen. 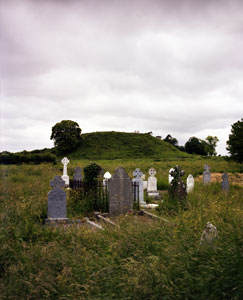 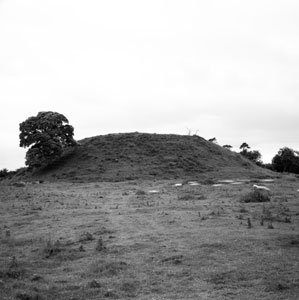 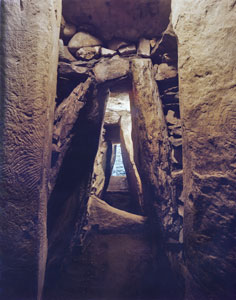 Dowth was first mentioned in the modern era by a visitor to Newgrange in 1769. By that time the landlord of the area, John, sixth Viscount Netterville, had erected on its summit a “modern ornamental temple,”10 (see Beranger sketch, below) really a garden “folly,” where the Viscount would kneel in prayer on Sunday mornings, while his servant, in attendance at the Mass in the church below, would hoist a flag at different points in the service so that his master could “keep pace with the devotions and evade the law.”11 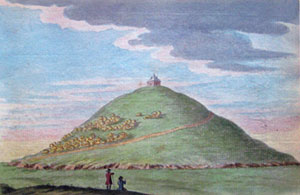 The massive crater in the center of Dowth may suggest to a visitor that the mound was the target of a wartime Buzz Bomb. The crater, however, is the result of an antiquarian version of “friendly fire.” In 1847-48, in its first attempt at an excavation, the Royal Irish Academy sent a poorly funded crew, led by an engineer, R. H. Frith, to try to find a chamber similar to that at Newgrange. Erroneously believing the Newgrange chamber to be located in that mound’s center, they began to excavate the central portion of Dowth. While thousands of tons of material at the mound’s center were removed, some by explosives, no new chamber was found, no complete documentation was ever written, the plans of the excavation were lost, and no attempt was made to fill in the scar created.12 Thirty years later, the Rev. James Graves wrote:

“We must lament that this grand national monument has been left to destruction. …when I saw it, the materials of the tumulus were lying about in sad confusion, and evidently had never been placed back. Being so, Mr. Elcock, the tenant of the land, naturally thought they would form good building materials and acted accordingly. Thousands of tons of stones for ‘road metal’ were also taken from it, for Mr. Elcock was a road contractor as well as a house builder.” 13

Even after the monument was placed under state auspices in 1882, the damage continued. The Board of Public Works enlarged the opening created by the botched 1847 excavation in order to construct the entrance—with the iron ladder— for visitors. Some of the archaeological evidence left intact in 1847 was thus lost into the same darkness a generation later.14 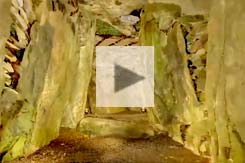 Thus begins the legend of Dubad (Dowth) in the Metrical Dindshenchas, derived from earlier oral traditions that may have first been written down in the eleventh century. This “place-name tale” explains that Ireland was bring devastated by a disease (“murrain”) killing its cattle; only seven cows and a bull were left alive. The King of Ireland therefore commanded all his men to gather and work for one day to build a platform “in the likeness of Nimrod’s [Babel] tower”16 reaching to the sky in an attempt to end the plague. The king’s sister, a sorceress, offered to make the sun stop in its tracks so that the men would have an endless day to complete their task. But the king was overcome with lust and committed incest with his sister. Her spell was broken by this transgression, day became night, and the men gave up their task and went home. The tower was never completed, and the place was ever after called “Darkness.” Here is the translation of the original Dindshenchas verses:

“There is another tale — ’tis known to me —
of that hill, which Dubthach possesses:
it was made, though great the exploit,
by Bresal Bodibad.

In his time there fell a murrain on kine
in every place in Ireland,
except for seven cows and a bull that increased strength
for every farmer in his time.

By him is built the solid hill
in the likeness of Nimrod’s tower,
so that from it he might pass to heaven,
— that is the cause why it was undertaken.

The men of all Erin came to make for him
that hill — all on one day:
the wight exacted from them hostages
for the work of that day.

His own sister said to him,
she would not let the sun run his course;
there should be no night but bright day
till the work reached completion.

His sister hies her on her way
strongly she makes her druid spell:
the sun was motionless above her head;
she checked him on one spot.

Bresal came (lust seized him)
from the hill unto his sister:
the host made of it a marvel:
he found her at Ferta Cuile.

He went in unto her, though it was a crime,
though it was violation of his sister:
on this wise the hill here
is called Ferta Cuile.

When it was no longer day for them thereafter
(it is likely that it was night),
the hill was not brought to the top,
the men of Erin depart homeward.

From that day forth the hill remains
without addition to its height:
it shall not grow greater from this time onward
till the Doom of destruction and judgment.

It is Fland here — bright his art —
who tells this tale — no deceptive speech:
a choice story — spread it abroad, men and women!
lips, make mention of it among excellences!” 17