The Rock of Doon

“Soon from the North shall Eire be united
—all men and new books announce this in assemblies.
Soon shall she and the nobles unite
a king of the Gaoidheal-blood to fresh-soaked Banbha.Help is at hand for the Plain of Té’s Midhe
—a grave prophecy wherewith all agree;
all men summon him to the Field of Gáireach,
all prophets have spoken of our Aodh by name.

From the hills of the Finn to fair-branched Cliú
the Gaoidhil as every other stock shall gather round him;
help from the North shall be near them
and many shall be the fight about the Bóinn
with its bright swans.”

“Ode to Aodh Ruadh Ó Domhnaill,” an O’Donnell chieftain inaugurated at the Rock of Doon, c. 1592 1

Drag within the image to explore the Rock of Doon in virtual reality.

The Rock of Doon is a craggy eminence with a storied past and a glorious panoramic view (see virtual-reality environment, above). The hill rises 120 m (394 ft) above the surrounding countryside. On its flat summit there was reputed to be an inauguration ceremony on a ritual stone, during which the tribal leader was joined symbolically with the powers of nature during a brutal pagan rite. The ritual stone is gone, replaced by a commemorative plaque, accessible in the VR environment.2 At the base of the hill is a famous holy well, now holding out the promise of cures to the Christian faithful, but perhaps once linked to the darker ancient tradition. Modern pilgrims pour the well water onto their afflicted body parts, and leave personal items on the nearby “rag tree.”

There is evidence that the Rock of Doon (Carraig an Dúin) was an important site thousands of years ago. Artifacts from the Bronze Age (c. 1500 BCE) were discovered nearby. There were also remnants of a prehistoric togher, a wooden causeway through the marshy area. But the Rock is forever linked in tradition with the history of the O’Donnell (Uí Dhomhnaill) kingdom, Tír Chonaill (Donegal). The name is taken from the Irish word Domhnaill, meaning “mighty.” The patriarch of all the Ui Neill, of which the O’Donnells were one branch, was the quasi-mythical fourth-century warrior known as Niall of the Nine Hostages.3 The first recorded O’Donnell inauguration at the Rock of Doon was that of Eignechan in 1200 CE; Twenty-five O’Donnells later, the final king to be crowned here was Rory Ó Donnell in 1603. The family is mentioned more than three hundred times in the 17-century Annals of the Four Masters, although the O’Donnells didn’t fully reach their prominence until the thirteenth century. Today there may be as many as 13,000 O’Donnells living in Ireland.4

One of the most prominent members of the family was Manus O’Donnell, who gathered together the scholars who in 1532 completed the authoritative biography of the great Donegal saint of the sixth century, Colmcille. According to Manus O’Donnell, the saint is connected to the area around the Rock of Doon, even though he’s most closely associated with the Glencolumbcille area some 80 km (50 mi) to the southwest.

Giraldus Cambrensis, not an impartial observer, offered in the twelfth century an account of the ceremony that took place at the Rock of Doon. While his lurid description may be entirely apocryphal, it does include some elements of investiture ceremonies documented elsewhere (see illustration, below left):

“There is in the northern and farther part of Ulster…a certain people which is accustomed to appoint its king with a rite altogether outlandish and abominable. When the whole people of that land has been gathered together in one place, a white mare is brought forward into the middle of the assembly. He who is to be inaugurated…has bestial intercourse with her before all, professing himself to be a beast also. The mare is then killed immediately, cut up in pieces, and boiled in water. A bath is prepared for the man afterwards in the same water. He sits in the bath surrounded by all his people, and all, he and they, eat of the meat of the mare which is brought to them. He quaffs and drinks of the broth in which he is bathed, not in any cup, or using his hand, but just dipping his mouth into it round about him. When this unrighteous rite has been carried out, his kingship and dominion have been conferred.” 5 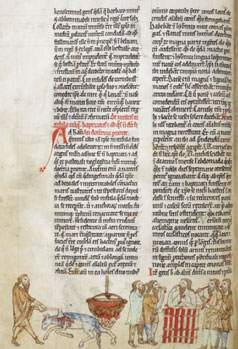 The ceremony at the Rock of Doon according to Giraldus Cambrensis. Click to enlarge the drawing of the ceremony. (Topographia Hiberniae. The British Library, Royal MS 13 B VIII f.28v)

The actual inauguration ceremony had become by the Christian era a two-part affair. A more refined ceremony with the participation of clergy took place at the Kimacrenan church, perhaps an echo of an earlier ceremony at an O’Donnell fort in the town. This was followed by a climb up to the top of the Rock of Doon for the ancient ritual of affirmation for the leader. The ceremony was centered upon a special stone, now lost, that was supposed to have had impressions of the feet of the original O’Donnell chieftain on it.6

Those who aspired to the leadership of the clan were required to be of the direct linear of the original conqueror of the territory, and had to be free from blemish. In the presence of the leading members of the clan, the chieftain-elect removed his shoes and placed his feet in the imprint of his earliest predecessor. The Ullamh (poet) then read aloud the key laws and customs of the governance of the clan, and afterwards administered the oath to preserve these ancient ways. The new leader was then given An Slat Bhan, the straight white rod that symbolized his purity and his authority. He was then given the oath:

“Receive, sire, the auspicious ensign of your dignity, and remember to imitate in your government the whiteness, straightness, and unknottiness of this rod, to the end that no evil tongue may find cause to asperse the candour of your actions with blackness, nor any kind of corruption or tie of friendship be able to pervert your justice; therefore, in a lucky hour, take the government of this people, to exercise the power given you with freedom and security.” 7 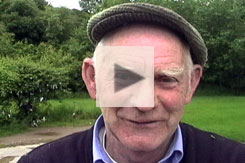 Site caretaker Charles Gallagher was told as a child that the base of Doon Rock was the entrance to the fairy kingdom. (1999).

Following this ceremony the new chieftain stepped down from the stone and turned around three times in each direction, to cast his gaze on all the lands over which he ruled, and to show himself to his people.8

One event that almost certainly did occur at the Rock of Doon violently marked the end of its ceremonial use by the Gaelic lords of Ireland. At the start of the 17th century the English had exerted their dominion over most of the ancient fiefdoms of the land. Most of the Irish aristocracy had resigned themselves to the inevitable end of their many centuries of feudal lordship, and left en mass for the continent in 1607, in what was known as the “Flight of the Earls.” However young Cahir O’Doherty, one of the last of the Tír Chonaill chieftains, made an alliance with the English. He was even knighted, in 1607 becoming Sir Cahir O’Doherty. But when his English patron was replaced, he lost his special relationship with the crown.9

In April of 1608 O’Doherty, now in open rebellion, sacked and burned Derry city, and then marched on Strabane and did the same. Other Irish families soon joined him. But this revolt, which threatened to spread across the land, was short lived. During a counter-attack by the royal forces Sir Cahir was killed at the Rock of Doon on July 5th, and his remaining forces vanquished. The body of the young O’Doherty was drawn and quartered, his severed head displayed on the Dublin city walls (see illustration in gallery below).10

If the tragic heroism of Cahir O’Doherty has become the stuff of legend, other tales of the Rock of Doon are even more clearly rooted within the realm of myth. An account in 1885 reported the local belief that buried underneath a slab at the top of the Rock of Doon were “all the crowns of the kings of the country.”

“But no one can get at them but the lawful heir, as no one else will be able to cut away the cement that fastens the square or “door” in the flag, which leads to their hiding-place. Different persons have tried; but either their tools failed, or they were driven away by supernatural means.” 11

In the video interview, above right, site caretaker Charles Gallagher in 1999 described the rock as the kingdom of the fairy folk, the home of the king of the fairies. It was, he said, “a great big slab of rock with a little slit on it. And we always say that little slit is the keyhole. And anyone that can find the key will enter.”12

The well at the foot of the Rock of Doon, called Tobar an Duin, has been considered a source of miraculous cures by many generations of Catholic pilgrims. But it may have played a part in the inauguration ritual at the dawn of history. Some have suggested that this sacred well once held the water that, in the gory ritual described by Giraldus Cambrensis, mixed with the blood of the conjugal mare.13

The origin of the Doon Well as a place of Christian devotion may have begun in the fifteenth century, when a Franciscan named Lector Ó Firghil, known locally as a powerful healer, told his followers that upon his death his powers would live on after him through the healing waters of Tobar an Duin. A plaque at the site instructs the pilgrims in the ritual “prayers of the station:” 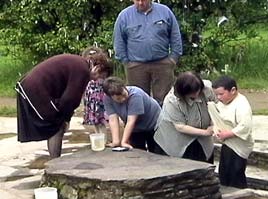 The Slevlan family recites the prayers and applies the holy water (see video above right).

In the video, above right, the Slevlan family from nearby Downings may be seen in a 1999 visit to the well, drinking its water, and applying it to those parts of their bodies in need of saintly intervention. It is said that nearly every home in Donegal has a bottle of water from the Well of Doon, and many others are annually sent abroad. Trainloads of pilgrims once disembarked nearby on summer Sundays for a visit to the well.15

Click to see two different version of the O’Donnell arms.

Beside the well the branches of a small grove of hazel trees are covered with bits of clothing and other colorful trinkets, as well as an assortment of religious paraphernalia such as rosaries, prayer cards, and small statues of saints. Such “rag trees” may demonstrate a survival, and a mingling, of an ancient pre-Christian Celtic tradition. Visitors to the well have placed these items on the branches of the tree, the significance of each sealed within their own supplications.16

A short path from the well leads into the wood, where a flat stone on a small foundation once served as a “Mass Rock.” During the years of the Penal Laws (1695-1741), when the public practice of the Catholic faith was forbidden, hidden rocks such as this one were where the faithful could meet. They were led there by a brave priest who, if caught, might find himself forced into a barrel of nails and thrown off the nearby cliff at Binn an Sagairt (Hill of the Priest).17.

It is clear that visitors to the Rock of Doon, its holy well, and its Mass Rock, have all manner of personal agendas for their varied pilgrimages. One visitor to the well, according to Charles Gallagher, had an unusual intention in mind (see video, above right). When Gallagher suggested to him that a visit to the Doon Well might gain him favor in a quest for a wife, the visitor demurred, “I’ve come here to get rid of mine.”18