“I can think of no prehistoric monument of whose written history we know nothing the use and purpose of which have been so well preserved by inviolable tradition as the Hole Stone…To this day, through all the changes of race and peoples that have occurred in County Antrim…the tradition that the Holestone is a betrothal, if not a marriage token remains unbroken, and couples from all the district round still plight their troths by clasping fingers through the ring or hole in this stone.”

Drag within the image to view the Doagh Holestone in virtual reality.

This 1.39 m (4.5 ft) tall standing stone, with its prominent perforation, is known locally both as the Holestone and the Lovestone. The reason for the first name is evident, while the second name for the stone requires a bit of explanation.

While some holed stones in Ireland are known for oath-making and others for use in childbirth,2 the Doagh Holestone, 1.6 km (1 mi) outside of Doagh on Holestone Road, has acquired a reputation as the place to exchange marriage vows. Although the waist-high hole in the pillar is but 8 cm (3 in) in diameter, it is sufficient for a woman’s hand to pass through, where she may grasp the hand of her intended on the opposite side of the stone.

It may be that such ceremonies had their origin in an era when clergy were not conveniently available in rural communities, and a betrothal using the Holestone was good enough, according to local custom, to avoid the stigma of an illegitimate birth. A priest or the civil authorities could then later ratify the marriage when one was available.3

The persistence of pagan practices at the Doagh Holestone long after the introduction of Christianity may have been part of the reason why the dioceses of Down and Connor became separated. It seems that in 1137 Bishop Malachy O’Morgair insisted on separating the two, not wanting to have anything to do with the people of Connor, who, he felt, still acted like pagans in their customs and way of living. “They would not enter into lawful [ecclesiastical] marriages…” St. Malachy complained that he had ”…been sent not to men but beasts.”4 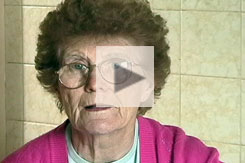 It is unclear when the Doagh Holestone began its role as the regional connubial helper. Unlike two other perforated stones in Co. Antrim, this monument, likely from the Bronze Age, has not been “Christianized” by the addition of an inscribed cross. A traveler’s journal published in 1809 considers the stone as “a land mark of the ancient Irish chieftains,”5 but does not mention any connection with fertility or matrimonial ceremonies. Even as late as 1887 an article in an academic journal states that “there is neither record nor tradition respecting the purpose for which it was formed.”6 A plaque at the site, however, informs that betrothal ceremonies there can be traced back as far as the 1830s.7

While some accounts of the stone include its use for securing prisoners,8 W.G. Wood-Martin in 1902 asserted that it was anciently “connected with aphrodisiac customs.”9 Author and poet Anthony Weir suggested in 1990 that the modern custom of lovers passing a white handkerchief through the hole in such stones is actually a toned-down survival of a pagan fertility rite that used the conveniently-situated aperture for the insertion of the male organ.10

The Dublin Penny Journal in 1833 contains the sad story of a man who, around the start of the century, was in pain because an appendage (his hand, thankfully) was stuck in the stone. He was unable to extract it despite all his exertions. A gentleman announced to the crowd that had gathered that if he could get his powder-horn he would free him and “blow up the stone in an instant!”

“At these words, the confusion and alarm of the multitude beggars all description, while the cries of the prisoner, which had hitherto been sunk in the noise, became piercing in the extreme. During the confusion, the gentleman had sent off privately for some vinegar, and on the return of the messenger, with it, he began to pacify the prisoner, and to bathe his hand, which had become swelled in the various attempts made to get it extricated; and he at length succeeded in effecting his liberation, without application to the much dreaded powder horn.” 11

At any time during the warmer months of the year a visitor to the Doagh Holestone might find the ground blanketed in colorful flower petals, the remnants of a recent visit by newlyweds clasping hands through the hole. Their family and friends attend this modern rendition of a time-honored local practice, blissfully unmindful of a hand stuck in the stone generations ago or other, more ancient and pagan activities at the site.

Elizabeth Wilson (see video, above right), on whose farmland the Lovestone sits, saw her daughter ride to her ceremony at the stone in a horse-drawn carriage. “And it was the 28th of May, so it was quite a cold spring. And the winds were out, until quite late that year.”12