Posted at 20:07h in Completed, Court and Wedge Tombs, featured by Howard
Share

“Belief in buried treasure is universal throughout Ireland. Until lately the majority of old pagan funeral urns were broken into fragments by the irate discoverers; irate for this reason: it was, and still is, in some parts of the country, a popular belief amongst the peasantry that the bones and charcoal contained in the vessels were in reality golden coin and ornaments belonging to the ‘good people,’ or fairies, and that they returned to gold during the night. But if watched with proper precautions and ceremonies, the fairy gold at daybreak would still remain gold.…Avaricious gold dreamers, by this means converted into gold seekers, have probably inflicted more irreparable archaeological damage…than the desecrating foreign enemy.”

Drag within the image to explore the Cloghanmore Court Tomb in virtual reality.

The folklore promises that anyone who dreams, three night in succession, of finding gold under the stones of an ancient monument would surely have his dreams comes true. As a young man living very close to Cloghanmore, Patrick Byrne (photo, below right) was one of the “gold dreamers.” Mr. Byrne, who was given the nickname “Paddy the Miner,” was 83 when we visited in 1979. It seems that he and his brother John believed that there was gold under the Cloghanmore stones and tried to find it. Although it may stretch the truth, he said that they “took the tomb entirely apart” looking for the gold,” but none was found. While the Byrne brothers were respectful of the fairies, it seems that their desire for gold was greater than their fear of the supernatural.

The story of the Bryne brothers’ search for gold has traveled with the generations of Irish immigrants to Australia; in certain places there a person who goes off on a quixotic search for gold is called a “Paddy the Miner,” or a “John the Miner.” We visited the Byrne household twice, during two successive summer fieldwork sessions (1979 and 1980). Mr. Byrne was not willing to speak for the tape recorder. It seems that he had discovered that barely a week after we had tape recorded our interview with John McGuire in 1979 (below, right), Mr. McGuire sadly, and unexpectedly, passed on. “I know what happens to those you put on tape,” Mr. Byrne told us, “you’ll not be recording me.”2

An Cloghanmore, “The Great Stone Heap,” was when discovered in the mid-nineteenth century “a ruinous pile of chambers and galleries” with the roofing-stones of its burial cists tossed aside.3 Although it was originally built on good agricultural land, perhaps as long ago as 3000 BCE, changing weather conditions in the millennia since its construction had long buried it in the bog lands that came to dominate Malin More glen. In the nineteenth century peat workers discovered it and dug it out from the bog. It was then used for years as a stone quarry by road and building contractors. The Board of Works cleaned and reconstructed the site c.1886-1887. The workers took the jumble of stones from the collapsed (and quarried) cairn and used these to finish the wall around the site and sharply delineate its characteristic court-tomb outline. In the gallery at the bottom of this page, compare Sir Samuel Ferguson’s 1864 plan of the then recently discovered monument to that of the restored site as illustrated by William Wakeman in 1891. 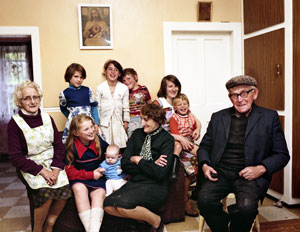 While the restoration work was controversial at the time,4 it is today generally accepted with the discovery of similar examples elsewhere in the country.5 Although it may not with complete accuracy depict the original shape of the tomb, the Board of Works project likely saved the site from further depredations. Additional preservation and access work allows today’s visitors to cross a bridge over a little stream and walk through an elevated concrete pathway through the bog to the tomb’s entrance. Depending on the season, parts of the tomb’s interior may yet present a very wet walk through the spongy ground. However, a spectacular array of bog ferns and flowers will more than compensate for the soggy footwear. Some of this luxuriant greenery, plus the extensive lichen patterns on the stones, may be seen in the large-format close-up view, below left.

The total length of the reconstructed tomb is about 47 m (154 ft). Its oval-shaped court is about 13.7 m (45 ft) long and 11m (36 ft) wide (see diagram in the gallery, below). The two main burial chambers, side-by-side galleries each 5 m (16.5 ft) long, are located near the western end of the tomb. This is a feature found at only one other Irish site, the Deerpark Court Tomb in Co. Sligo.6 The “arms” of the large court nearly meet at its eastern end, where an entrance is now located. At either side of this entrance are secondary burial chambers, a feature not found in most other court tombs.

The high-resolution photographs to the right were made with a large-format view camera in 1979. Click the photo, and then click the button at the right of its Zoomify toolbar to see it full-screen. 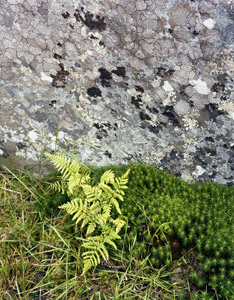 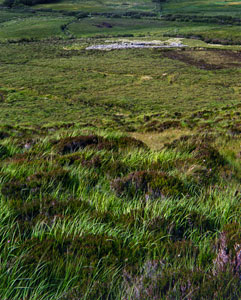 More strikingly unique, these two secondary burial chambers each contain something not found in any other court tomb: an orthostat with the signature rock-art designs of the Irish passage tomb. While not nearly as numerous nor as complex as the decorations at the Newgrange or Loughcrew passage tombs, characteristic passage tomb art on the two stones was noted when the monument was first discovered.

The luxuriant growth of lichens and mosses on the stones during the century and half since the Board of Works restored the monument has obscured the designs noted by the nineteenth-century antiquarians. A selection of their drawings is contained in the gallery below. Especially observant visitors may still note some of the rock art today, especially when the angular light of the early morning sun delineates the inscribed circles. A close-up view of one of the two decorated orthostats of the secondary tombs may be viewed by clicking through the hotspots in the virtual-reality environment, top left.7

In most cases the folklore of prehistoric monuments has been an agent of their preservation. Stories about the untimely ends and fairy malfeasance that might await the person who interfered with the stones of an ancient monument, or the thorn tree on an earthen rath (fairy fort), were once heard throughout the country. Even in modern Ireland, an elderly country gentleman is likely to insist that while he doesn’t believe in the fairies, he feels that it’s best not to take any chances.8

Other stories about monuments, especially those including unstable ruins, or on cliff-side locations, may have been told as a way to keep children away from danger. According to John McGuire, from nearby Gleann Cholm Cille, “these fairy tales were told so as to frighten them, to keep them away from the dangerous places.”9 In the video, recorded in 1979, Mr. McGuire goes on to explain how such stories may have originated. 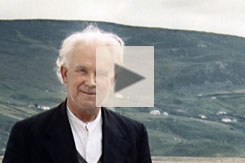 According to John McGuire, some folk tales about the monuments were intended to scare children away from dangerous places (1979).

The folklore about the gold and other treasures to be found underneath the ancient monuments, of course, had quite the opposite effect. These tales not only drew people toward the monuments, they also encouraged some to wantonly disassemble the stones in their quixotic search for the riches hidden below. As Irish folklorist Kevin Danaher (1913-2002) put it:

“Indeed there is hardly an ancient ruin, a burial mound or a stone circle without its story of hidden wealth. There is treasure at the bottom of lakes, guarded by fearsome serpents. There is gold under pillar-stones, which turn into giants when treasure-hunters come to disturb it. There is the fairy hoard that turns to leaves or ashes in the pocket of the finder. And there still is, and always will be, the crock of gold at the foot of the rainbow.” 10

It may be that legends regarding the treasures hidden under prehistoric monuments evolved from a folk memory of the medieval practice of concealing valuables in the earth during periods of turmoil, such as the Viking raids of the ninth century. It would have been an advantage to the owner of the valuables to bury them under a spot that could be committed to memory and passed on to family members. A prominent standing stone, megalithic tomb or an earthen rath would certainly be such a location. One of the most important treasures of Ireland, an intricately decorated chalice, was found in 1868 buried in such a rath, Ardagh Fort.11

In 1920, Lady Gregory recorded a neighbor of hers in Co. Sligo saying,

“There’s crocks of gold in all the forths [forts], but there’s cats and things guarding them. And if any one does find the gold, he doesn’t live long afterwards. But sometimes you might see it and think that it was only a heap of dung. It’s best to leave such things alone.” 12

Most legends of Ireland’s ancient monuments likely originated from memories held deep within the shared consciousness. All folklore, however, must at one time begin with the person who first tells the tale. At the Cloghanmore Court Tomb, a recent immigrant from Germany nearly created a new genre within the monument’s folklore. According to a writer visiting the site,

“The lady across the road…saw lights at [Cloghanmore] and thought that the fairies had come to get her. She said that she turned off her lights and closed her door and windows and sat in her chair until daylight. Then she went next door to tell her neighbor how frightened she had been. The neighbor had moved there from Germany and did not know about fairies. She said she had felt so sorry for those poor dead people with no one to remember them that she had gone across the road and lit some candles for them.” 13