“Why did the men of Ulster slay Cú Roí mac Dáire? Easy to say. Because of Bláthnat who was carried off from the siege of the Fir Fálgae…”

“The country people, from the height and steepness of it, and the largeness of the stones, will have it to be the work and labour of a giant, and it seems indeed wonderful how human strength, unassisted by engines, could possible raise stones of such a prodigious weight to the summit of so steep and high a mountain.”

Ancient and Present State of the County of Kerry, 1756 2

Drag within the image to explore Caherconree in virtual reality.

Cú Roí mac Dáire was a legendary sorcerer, a great magician who was said to reside in the south of Ireland in the brutal tribal era of the Iron Age. 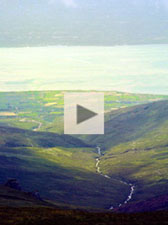 He has given his name both to the mountain and to the stone fort near its peak. All that remains of Caher Conri (“The Fort of Cú Roí”) is a tumbling stone wall, 107m (350ft) long, 4m (14ft) thick, and 3m (10ft) at its highest point. It cuts off a narrow triangle of land 625m (2,050ft) above sea level.3 Archaeologists classify this type of monument as a “promontory fort,” and this is the highest one in Ireland. With the walls guarding its entrance, and forbidding sheer cliffs protecting its other two sides, this small triangular refuge of about .8 hectares (two acres) on a remote mountain must have been a sanctuary to use when all else failed. If so, it was a sanctuary with an incredible view: west the length of the Dingle Peninsula and south down to the Macgillycuddy Reeks. Another Dingle Peninsula promontory fort, in this instance guarded on three sides by the ocean, is Dunbeg Fort.4

In the initial view of the seven-node virtual-reality environment, made at the small car park at the trailhead, you may click on the hotspot to begin your ascent up the path to the fort of Caherconree. This location may be seen in a satellite view. The VR tour was compiled from photographs made in visits to the site from 1999 to 2018.

Caherconree is one of the oldest place names to be found in the traditional literature of Ireland. In the Triads of Ireland (c. ninth – 14th century CE), it is named as one of the three oldest buildings in the land. In the 12th-century tale of The Battle of Magh Rath, said to have been fought in 637 CE, the text mentions the fort:5

The Tragic Death of Cú Roí mac Dáire is one of a group of sagas which feature this half-demonic person with magic powers. There are numerous versions of it in early Irish and it is echoed in stories in Wales and even in Belgium.6 The oldest version is found in the Yellow Book of Lecan, now at Trinity College, Dublin. It was written around the start of the 15th century and may be based upon stories transcribed as early as the 11th century CE.7

At first Cú Roí was allied with the great hero Cúchulainn, the “Hound of Ulster.” But after a ferocious battle in Scotland, when they were dividing the plunder, they did not give the magician Cú Roí his fair share. Although Cú Roi was, by right, able to claim as his reward the lovely lady Bláthnat, Cúchulainn wanted the woman for himself. When Cúchulainn would not agree to turn his lover over to Cú Roí, the magician turned upon him, thrust him into the earth to his armpits, cropped his hair with his sword, rubbed cow-dung into his head, and then went home to his fort on top of the mountain. He took Bláthnat with him as his wife. 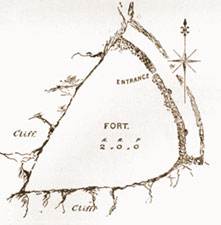 His fortress was impregnable. Not only was it situated on this forbidding, isolated mountaintop, but it was also guarded by Cú Roí’s magical powers. At night, when he slept, he was able to make the fort spin around and around, confounding his enemies.8

But Bláthnat’s love for Cúchulainn was greater than the evil Cú Roís magic. After Cúchulainn’s hair grew back and he regained his courage, they plotted the demise of Cú Roí.

The Slieve Misch Mountain Range, in a virtual-reality view from the other side of Dingle Bay.

Bláthnat flattered her husband by telling him that the construction of the fort was not suitable for one as great as he. So the magician sent his warriors out to gather more stones so that the fort could be enlarged. While the fort was undefended, Bláthnat hid Cú Roí’s weapons. As he slept, she poured milk into the stream that runs down the mountain. Cúchulainn and his men, camping in the valley below, saw the stream turn white, and knew that the time to attack had arrived.

They rushed up the mountain with a roar, and slaughtered the magician and his entourage. Bláthnat and Cúchulainn were reunited. The mountain stream that she used as a signal is today called Fion Glasse (“White Brook”). With just a little imagination, when the afternoon light glints off the rushing water, it again becomes a milky message (see video above right).

However Cúchulainn and Bláthnat did not live happily ever after. A few years afterwards, Cú Roí’s poet Ferchertne, who survived the attack, encounterd Bláthnat along a mountain path. He grabbed her and then jumped off the cliff, providing Cú Roí with vengeance from the grave for the betrayal. They were buried at the foot of the cliff, at a place still known as Feart Bláthnat agus Feirceitne (“The Mound of Blaithne and Feirceitne”).9 Much later, Cúchulainn, mortally wounded by Cú Roí’s son Lugaid, would expire bound to a standing stone in Co. Louth, Clochafarmore (“the Great Man’s Stone”).

“Sad was the struggle together
Of Bláthnat and Ferchertne,
And the graves of them both are
In the powerful land of Cenn Bera…

Bláthnat was slain
In the slaughter above Argat-glen,
A grievous deed for a woman to betray her husband.” 10

In another version of the story Cú Roí’s soul went into an apple, which was eaten by a salmon who lived in the stream and only came to the surface once every seven years. In this story Bláthnat found out about the fish, told Cúchulainn, who then killed the fish.11

The Tragic Death of Cú Roí mac Dáire may be read in its entirety here. Cúchulainn is also a central character in the Táin Bó Cúailnge (“The Cattle Raid of Cooley”).

These three high-resolution photographs were made with a large-format view camera in 1979. Click the photo, and then click the button at the right of its Zoomify toolbar to see it full-screen. 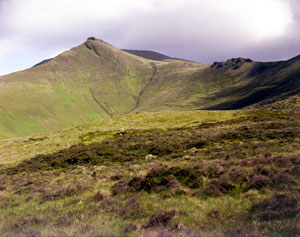 The fort of Cú Roí is on the promontory, upper left. 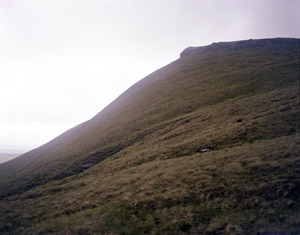 The promontory
from another angle. 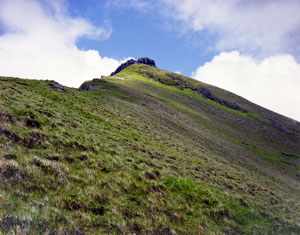 The mid-point of the climb.

Is it possible that the warrior culture depicted in The Tragic Death of Cú Roí mac Dáire might represent more history than myth? Scholars believe that the language and other clues contained in some of the Irish sagas indicate that none could have been written down before the eighth century CE, but that there might have been a long period of oral transmission before that time. And while most cultures go through a Heroic Age, dominated by aristocratic warrior cults, it is likely that none of the individuals in the story are historical.12

At one time there may have been far more extensive remains of the fort of Cú Roí. In an 1899 report the antiquarian P.J. Lynch wrote:

“I have been informed that some years ago the farmers living on the south side of the mountain were in the habit of removing the long stones from the Caher, and using them as lintels in the building of their houses. The means employed was to secure a chain around the stone, and yoke it to a donkey or mountain pony; this would account for the disappearance of the covering stones, and to the destruction of the entrance…” 13

A decade later Lynch discovered a “relic of Caherconree,” a basin stone that had been removed from the fort around 1830 and brought down the mountain to a home near Killorglin. Lynch’s photograph of this stone, which was known locally as “Finn Mac Cumhaill’s Saucer,” may be seen in the gallery below.14

The start of the steep trail up to the redoubt of Cú Roí begins east of the barely-paved mountain road called Bóthar na gCloch (“Road of the Stones”) that bisects the Dingle Peninsula east of Anascaul.15 The climb up Caherconree presents certain difficulties. Out of the six fieldwork visits to the Dingle Peninsula to climb the peak we reached the summit but twice in thirty years. On only one occasion was the weather on top completely clear. The first mile on the path traverses wet bogland, with spongy vegetation covering sinkholes into which you can plunge up to your knees in cold peaty muck. Beyond that is a half mile of climbing through areas of loose rock. There is always the threat of the clouds, which can descend suddenly, leaving no visibility at all. The striped posts placed at intervals on the mountainside are only marginally helpful for locating the trail when this happens.

In the late 1850s a group from the South Munster Antiquarian Society climbed up to the top of Caherconree to explore the ruins of Cú Roí mac Dáire. One of them wrote a poem after seeing his companions enveloped in the mountain’s mist:

“We went our way, for ’twere dishonour
If e’er it should be said that we
Scared by the legends of the valley
Saw not the towers of old Conri.

No sooner went we up the mountain
That all at once we lost our way;
The mists in clouds came curling round us,
And led-our eyes and steps astray.” 16