Posted at 18:20h in Completed, secondary by Howard
Share

Roger Chambers Walker (1806-1854)…was a landlord, barrister and a noted Sligo antiquary…Walker combined the life of a landowner and landlord with that of…antiquarian looter and…collector of antiquities.
…
The sizeable private collection built up by Walker comprised dug-up, purchased or swapped items. Much of the collection was found locally or came from throughout Sligo including the island of Inishmurray…Some items were acquired by devious means while collectors vied with each other to outwit each other in the acquisition of choice items. 1 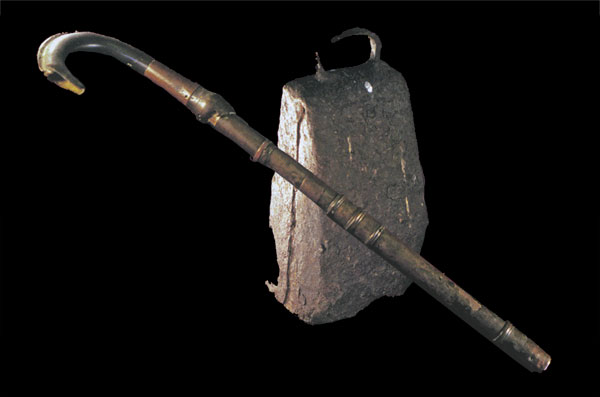 St. Molaise's bell and copper-clad wooden crozier were removed from Inishmurray in the 1840s and are now at Alnwick Castle in England.

A friend of the Ordnance Survey’s George Petrie (“Dearest George…”), Roger Chambers Walker was an amateur surveyor and an earnest local informant within the government effort to identify the nation’s antiquities.2 At the same time he was engaged in a sometimes competitive enterprise to acquire his own private collection of antiquities for his home at Rathcarrick, near Sligo town. Walker, once he set his marks on an antiquity he coveted, was not concerned with the niceties of prior ownership, and even boasted to Petrie of his efforts to pilfer an ancient stone from a churchyard:

“Tomorrow I go to make final arrangements for the Stealing of an old stone cross, very curious. I had hoped to have got it here long since but first my provider stole a wrong stone, a very curious one too, by the way, which of course I have kept. But latterly he (i.e. the purveyor) has been visited by certain scruples of conscience regarding the article to be stolen—a cross—and the place from where it is to be taken—a churchyard [punctuation added].” 3

Just 7 km (4.4 mi) off the coast of Co. Sligo is the small island of Inishmurray, now deserted, but known as holding “a larger number of examples of primitive Irish Art than perhaps any other early Christian settlement in Ireland.”4 Although Walker is most notorious for his unscientific excavations at Carrowmore, he was not unaware of the what treasures he might find for his collection with a short boat trip to the lightly populated and constable-free island. In October of 1837 Walker wrote to Petrie of his fascination with Inishmurray: “The island abounds in subjects of interest & is in my opinion by far the most curious spot in Ireland that is if it be in Ireland.” 5
At some point, likely before John O’Donovan’s visit in 1836, at a time when money was scarce and making poitín was more profitable than farming or fishing, the temptation of a bit of ready cash likely convinced a destitute islander to steal two pieces of the island’s treasured patrimony and a few years later hand them over to the earnest antiquarian with money in hand, Roger Walker.

Close-up view of the crest on the crozier from Inishmurray.

The bell and the crozier of St. Molaise once held an honored place on the altar of the eighth century Teach Molaise (St. Molaise’s Chapel) in Inishmurray’s Caiseal, along with the wooden statue of the saint (above, right).6 They were taken from the island where they had been for many hundreds of years and put on a shelf in Walker’s private museum, to be seen only by him and his visitors. His account book of 1842 notes that he paid but £2.00 for the saint’s bell.7

The crozier is 62 cm (25 in) long and is composed of 16 separate pieces of a copper-alloy metal sheathing, covering a wooden core. The crook has a solid metal crest with animal ornamentation, pierced by 12 small holes. The crook end (the “drop”) of the crozier may have been used as a repository for relics, as croziers from pre-Norman Ireland typically were used to contain the wooden staff of an early saint.

The Inishmurray bell, of bronze-coated iron, is 32.7 cm high and measures 19.5 x 15.5 cm at its opening. Pieces of one face and one side are broken away, as are parts of the handle. The bell is similar to others used widely in the pre-Norman Irish church and was probably made in the eighth or ninth century; the crozier was made perhaps a century later.8

Walker’s trove of antiquities from Inishmurray also included one of the best of the inscribed surf-rounded stones known as “cursing stones” or “speckled stones.”

A few years before he grew sickly and died at the early age of 48, Walker sold off his collection for £300 to a man whom he may have believed was an agent for the Royal Irish Academy. Instead, this middleman was working for the Duke of Northumberland, and by 1851 this precious collection of ancient Irish artifacts were shipped off to Northumberland’s Alnwick Castle in England. In later years some of these items were donated, and some purchased from Northumberland for the Museum of the Royal Irish Academy (later the National Museum of Ireland).9

Unfortunately, neither the bell nor the crozier from Inishmurray was included among the items repatriated from Alnwick Castle.10 For nearly a thousand years, from the time the monks fled the Viking’s bloody raids until the last 46 island residents left their homes in 1948, the statue, bell, and crozier of “Father Molosh” helped the people of Inishmurray sustain their faith. Today these sacred artifacts, remnants of the founder of a long-deserted monastic community on a now-abandoned island, languish in a sterile display in an alien land, where these pilfered pieces of Irish history are unlikely to be much noticed by the guests at one of the romantic castle weddings, nor by the actors in any of the eight Harry Potter movies filmed there.

Please sign the petition to the Duke of Northumberland.

Click here for all the notes from this page and for image credits.