Posted at 21:47h in Completed, Earthworks by Howard
Share

“When the race of the chieftains died out, then the ‘Sidhe’ crowded into the forts, and there held their councils and revels and dances. And if a man put his ear close to the ground at night he could hear the sweet fairy music rising up from under the earth. The rath, ever after, is sacred to the fairies, and no mortal is allowed to cut down a tree that grows on it or to carry away a stone.” 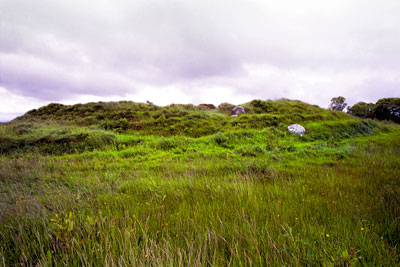 When we met Tony Hallinan outside his rural Sligo home in the summer of 1999 he was eager to share with us the two separate and seemingly unconnected ancient monuments practically at his doorstep. One (left) is an earthen rath, or “fairy fort,” with a prominent boulder reputed to be the doorway to an underground kingdom. A short distance away is the other monument, a small cairn with a stone on its top (below, left). It is located in the townland of Carns, which received its name from the monument. This is the stone where local chieftains of the O’Callaghan clan were inaugurated in the centuries before Cromwell. 2

What if an Iron-Age chieftain, seeking the best spot for his earthen fort, decided to build it close by an ancient burial cairn? What if, much later, the progenitor of the O’Callaghan clan recognized the same geographic sanctity when he sought a propitious place for an inauguration stone? And, to add to this speculation, what if both the fairy fort and the inauguration stone were somehow connected to what occurred on a dark country lane near Carns Hill in 1985?

On September 2nd of that year four local schoolgirls, the youngest 14, were startled by what they described initially as a “strange cloud movement.” These clouds, according to the trio, soon took on a familiar shape:

“‘It was very calm and at that stage there wasn’t a star in the sky but it was very dark,’ Mary McGuinness recalled.
‘We were on our way back on the opposite side of the road…and Mary (Hanley) looked up and started screaming,’ she said. ‘Mary said she could see Our Lady and Colleen could see Bernadette; Patricia and I looked up and I saw Our Lady with her hands joined in prayer. I couldn’t see her face, she was a greyish white colour to me but the others saw her in brilliant white.'” 3

Mary Hanley said that the figure of the Virgin Mary was about 2.5 m (8 ft) tall, with a star visible to the right of her head. Her friends came over to her to pull her away from the road, but she felt as if she were frozen in place. On the next night, and for the nine nights following, the teenagers retraced their steps on the deserted county roads, hoping for the miracle to have an encore.4 A week and a half later their experience had become national news, with 12,000 people assembled at the site.

“I was very frightened, and I didn’t want to look at the Apparition any longer – I was so afraid but I just had to look at it, I couldn’t turn away…I could feel some kind of shock or something going through my body…When we got to our house Mammy came to the door to put on the outside light – there was a visitor in our house and he was leaving at the time, and Mammy said she could see a glow of light on the four of us and she called out: ‘Tommy, look! These girls are shining!'” 5 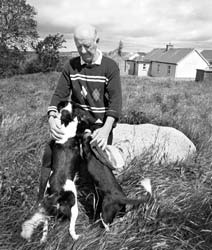 Tony Hallinan (and friends) sitting on the Carns Inauguration Stone.

Presenter Gay Byrne, on the Irish television station RTÉ 1, conducted an interview with the four girls nine days after their supernatural experience. This video is linked to the photograph of the girls, above, right. The parish priest, after interviewing the girls, reported that he “believed the girls believed they saw the Blessed Virgin.”6 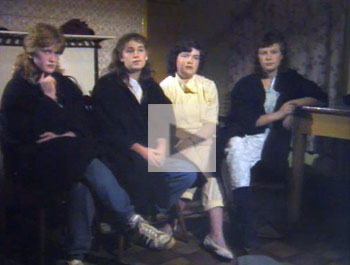 Eventually a shrine was erected at the site, with a Mass celebrated there annually on the anniversary of the apparition. It has become a place of pilgrimage, with visitors coming from all over Ireland.

The year 1985 became known as the “Year of the Apparitions,” as similar visions of the supernatural were reported at Ballinspittle and Inchaglee in Co. Cork, and at Mount Melleray in Co. Waterford. The four Culleens visionaries, interviewed 26 years after their experience that evening, remained adamant in their faith and the veracity of what they saw. “Over the years, some memories naturally fade, but for all of us the memory of what we saw that night is crystal clear,” said Mary McGuiness.7

In the three-way conversation recorded with local residents Tony Hallinan, Sheila Howley, and Sheila Clark (above, right), we learn how the presence in their neighborhood of a fairy fort creates for them a more remote response to an apparition than that of the four girls who believed they came face-to-face with the Virgin Mary. Claiming no personal encounters with the “gentry,” the three nonetheless acknowledge the long-established folk-memories and prohibitions regarding the site. The trio think of the fairy fort as simply a part of the landscape, albeit a part with a somewhat faded supernatural aspect to it.

“Their own country is Tir-nan-Og—the Country of the Young. It is under the ground, or under the sea, or it may not be far from any of us.” 9

These folk memories may have persisted through all the centuries that have passed since the last human residents of the ring fort left the scene. 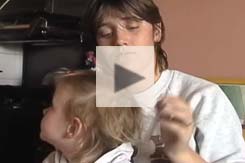 Afterwards, those who built their homes nearby may have looked upon the old earthen fort as the location of their ancestral spirits, who eventually came to be regarded less as fearsome ghosts of the departed, and more as the mischievous but less threatening fairies of folklore.10

From a modern perspective, with both cynicism and skepticism in vogue, we may look back with some nostalgia for a time when four young girls could claim an exchange with the supernatural and create a national phenomenon. It is unlikely that that the gentry living beneath the Tullylin Fairy Fort could have ever inspired such devotion. Although there was an influential 1911 book entitled The Fairy Faith in Celtic Countries,11 there was never a moment when these disparate folk beliefs could mobilize 12,000 people to assemble at a remote rural byway.

“That which is neither ill nor well,
That which belongs not to Heaven nor to Hell,
A wreath of the mist, a bubble of the stream,
‘Twixt a waking thought and a sleeping dream;
A form that men spy
With the half shut eye
In the beam of the setting sun, am I.”

In the 1999 video (above, right) three generations of Culleens residents (Sheila Clark, Tony Hallinan, and Sheila Howley) talk about their neighborhood fairy fort.