“‘Water is one of the prime necessities of life, and to early man the sign of a spring of crystal liquid bubbling out of the ground, or gushing from some crevice in a rock, must have appeared nothing short of miraculous.’
… Water is ‘other.’ Its moods are strange and various. By turns it is quiet, and violent; it can refresh or it can kill. It emerges in a miraculous way from the earth, for it is neither living, nor inanimate; it possesses life, yet is not itself alive, and unlike fire, can never fully be domesticated. Water further comes from below, from darkness, from the place where the dead…are buried, from the brooding presence beneath the feet.”

Drag within the image to explore the Tullaghan Hill Holy Well in virtual reality.

As Mary Lynch explains in the video (below, right) as recently as the 1930s the devout and the hopeful once trekked up the steep slope behind her home to the Tullaghan Hill Holy Well. This site, also called the Hawk’s Well, sits abandoned and overgrown on its remote 61-meter (200-foot) hill in the Ox Mountains of Co. Sligo. It looks out over the same scene that William Butler Yeats conjured in his stylized drama At the Hawk’s Well (1916). The well sits within a wall of stones, and along with a nearby penitential cairn, is positioned inside a cliff-edge fort.

Although it is 3.2 kilometers (two miles) away from the seacoast, and sits atop a mountain, the well has one legendary property that caused Giraldus Cambrensis in 1188 to name it one of the wonders of Ireland.2 It was said that it exhibited low tides and high tides, as if it were connected to the ocean. “A well there is of sweet water; the property of that well is, that it fills and ebbs like the sea, though it is far from the sea.”3 Other medieval texts claim that the well could alternate between fresh water, and seawater. Ruaidhrí Ó Flaithbheartaigh, in his 1685 history of Ireland, Ogygia wrote;

“In Sligo’s district on Mount Gam’s high side
A fountain lies not washed by ocean’s tide.
Each circling day it different water brings
The fresh, the salt, from it alternate springs.” 4

When we photographed the well in 1999 the half-meter (two-feet) wide basin contained about 46 centimeters (18 inches) of stagnant, algae-choked water. (See the close-up view of the water by clicking the hotspot in the virtual-reality environment, above left.) William Wakeman, visiting the spot in 1879, reported the same conditions.

The whole place presented a woefully abandoned look; and but for the carn immediately adjoining, and the presence of a pillar stone, called an altar, placed a little to the left of the well building, it was difficult to imagine that it had ever been of any importance.5

The altar, or pillar stone, has now apparently disappeared. And pilgrims no longer come calling. But for uncounted generations they came, and some claimed to experience miraculous cures from the properties of the water at this holy site. Ultimately the Lughnasa, or Garland Sunday, (last Sunday in July) visits to the well were suppressed by the local clergy, as it was reported that the pilgrims were having far too much secular enjoyment after visiting the holy site.6 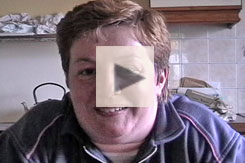 Mary Lynch, whose home sits below Tullaghan Hill, describes the practices at the Holy Well in her grandmother’s day. (1999 video).

The well is connected to Ireland’s patron saint, as in tradition the water first erupted from this spot when St. Patrick, chasing a female devil called Caerthanach the Fire Spitter, began to collapse from thirst. The saint started to pray, and the rocks answered with a miraculous surge of water.7

An earlier pre-Christian legend tells how Eremon, an ancient hero of Ireland, executed his servant Gamh and threw his head into the Tullaghan Well, which (understandably enough) made the water taste rather bitter.8

Several legends associated with the Tullaghan Hill Holy Well are also told about other wells. One such legend asserts that water taken from the well cannot be brought to a boil. Another legend concerns the pair of enchanted trout, not visible to everyone, which appear primarily for the faithful. These fish never grow old and are held to be very sacred. If they are removed by unbelievers, they are said to soon afterward be seen again swimming peacefully in the well.9 One legend, often connected with these denizens of holy basins, was re-told by Lady Wilde in 1902:

“… a tradition exists that a sacred trout has lived there from time immemorial, placed in the well by the saint who first sanctified the water. Now there was an adventurous man who desired much to get possession of this trout, and he watched it till at last he caught it asleep. Then he carried it off and put it on the gridiron. The trout bore the grilling of one side very patiently; but when the man tried to turn it on the fire, the trout suddenly jumped up and made off as hard as it could back to the well, where it still lives, and can be seen at times by those who have done proper penance and paid their dues to the priest, with one side all streaked and marked brown by the bars of the gridiron, which can never be effaced.” 10 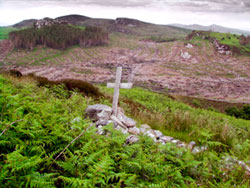 A view from just above the well, looking out over the Ox Mountains.

Some consider the Tullaghan Well as initially the site of a pagan Celtic festival to the Goddess Áine, a place that has been sacred for at least two thousand years.11 Northern Ireland folklorist Estyn Evans wrote in 1957 that Ireland’s holy wells represented “an ancient cult of waters springing from deep sources in primitive religion which was reinforced and adapted by successive intrusive cultures from the megalithic to the Christian.”12

However, a revisionist narrative seems to cast some cold water upon these appealing notions of spiritual continuity. An author in 1995 insisted that we need to step back from this assumption, calling it “compelling and dangerous.”

“Compelling because it dovetails neatly into the modern world’s aching need to retreat to a mystical, timeless past. Dangerous because it is a distortion of the real past, an act of mental indiscipline, the preference of the pleasant over the real. The adoption of pagan sites by Christian missionaries is acknowledged as a universal phenomenon, but as regards holy wells the adoption seems to have been by no means as smooth or as total as the popular accounts tend to suggest.” 13

Yeats’ At the Hawk’s Well was the first English play to use the dramatic form of Japanese Noh Theatre. In this one-act play the dried-up Tullaghan Well was reputed to periodically hold water that would make immortal whoever might have a taste. The hero Cú Chulainn arrives, wishing to have a chance at living forever. But an old man, who had been waiting there fifty years for the well to rise up, tells the hero about his wasted lifetime: whenever the well filled with water an enchantment caused him to fall asleep and miss his chance to drink and gain immortality.14

“I call to the eye of the mind
A well long choked up and dry
And boughs long stripped by the wind,
And I call to the mind’s eye
Pallor of an ivory face,
Its lofty dissolute air,
A man climbing up to a place
The salt sea wind has swept bare.
…
The accursed shadows have deluded me,
The stones are dark and yet the well is empty;
The water flowed and emptied while I slept.
You have deluded me my whole life through,
Accursed dancers, you have stolen my life.
That there should be such evil in a Shadow!” 15