Posted at 07:13h in Completed, Earthworks by Howard
Share

“Rosses is a little sea-dividing, sandy plain, covered with short grass, like a green tablecloth, and lying in the foam midway between the round cairn-headed Knocknarea and Ben Bulben…”
At the northern corner of Rosses is a little promontory of sand and rocks and grass: a mournful, haunted place. No wise peasant would fall asleep under its low cliff, for he who sleeps here may wake ‘silly,’ the ‘good people’ having carried off his soul. There is no more ready shortcut to the dim kingdom than this plovery headland…”

Drag within the image to explore Rosses Point in virtual reality.

The poet William Butler Yeats (1865-1939) drew artistic inspiration, as well as spiritual sustenance, from the folk tales of this area. Yeats knew Rosses Point intimately, as he spent many summer holidays there at his uncle’s home, Elsinore House. The house, now in ruins, was built by the pirate Black Jack and was said to be haunted by him.2

Each year that Yeats returned to the Sligo coast he gleaned from the peasantry the stories that would come to inspire much of his early prose. In The Celtic Twilight (1893) he put together some of the stories which he gathered in his outings throughout the area, when “… the door swings open at sundown, and those wild unchristian riders rush forth upon the fields…” 3

In the virtual-reality environment (above) you begin at the Rosses Point headland. Click the hotspots to view the scene from the grassy dunes, from the shoreline at dusk, and from a boat at sea, with Ben Bulben at the left of the panorama and Knocknarea at the right. The text added to the sea panorama is quoted by Yeats in “Drumcliff and Rosses.”

The landscape at Rosses, the stories from his neighbors, and the towering twin presences of the peaks of Ben Bulben and Knocknarea on opposite horizons inspired him, and ultimately led him to a spiritual awakening rooted in the shared consciousness of a long-ago Celtic past.

“Drumcliff and Rosses were, are, and ever shall be, please Heaven! places of unearthly resort. I have lived near by them and in them, time after time, and have gathered thus many a crumb of fairy lore.” 4 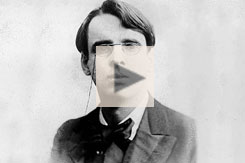 Yeats discovered that success in collecting folktales of the area was limited to the immediate neighborhood in which he lived. “A few miles northward I am wholly a stranger, and can find nothing.”5 A writer two decades earlier reported that sometimes while listening to a housewife recounting a story of the fairies, she may be interrupted by her husband telling her to beware, as the “good people may be listening.” 6

According to one of his sources in the area, there was a rath (fairy fort) that a farmer tried to level, but his livestock died, and many difficulties overcame him until he was left with “his head on his knees by the fire to the day of his death.” 7 On another occasion Yeats was told that some fishermen were sitting by the mouth of a cave when they spied two red-capped fiddlers playing their fairy tunes. The fishermen ran up to the village to tell what they had seen. But when a crowd of them returned to the cave the music had fallen silent and there was nothing to be seen.8

His summers spent talking with the peasantry at Ireland’s western edge helped to form the poet’s iconoclastic spiritual identity. Yeats came to believe that there exists a “collective unconscious” where an individual can come into contact with the minds of all who have ever lived. He felt that the artist thus is able to access the images and symbols that reside in the “great memory.” 9

Yeats’ years of folklore collection led him to conclude that maintaining the Irish cultural myths and traditions was essential for the destiny, the future success, of the Irish people.10

“Many times man lives and dies
Between his two eternities,
That of race and that of soul,
And ancient Ireland knew it all.” 11

Click here to see all the notes from this page. The Celtic Twilight, including “Drumcliff and Rosses,” may be read in its entirety here.