Posted at 06:35h in Completed, Court and Wedge Tombs by Howard
Share

“It is true that men of science do not now pretend to see Druids sacrificing their bleeding victims on the altar at Stonehenge…but all they have yet achieved is simple unbelief in the popular fallacies, nor have they hitherto ventured to supply anything better to take their place. They still call the circles temples, but without being able to suggest to what god they were dedicated, or for what rites they were appropriate, and, when asked as to the age in which they were erected, can only reply in the words of the song, that it was ‘long, long ago.'”

James Fergusson, Rude Stone Monuments in All Countries: Their Age and Uses, 1872 1

Drag within the image to view the Rosdoagh Court Tomb in virtual reality.

A hundred years after Fergusson’s lament, the method of using the decay of Carbon 14 to date remnants of the past fundamentally changed our understanding of history and prehistory. Fergusson, with no access to such technologies, proposed that the Irish megalithic monuments were not ancient at all. Rather he thought that they were all erected in the “first ten centuries of the Christian era.”2 We now know that most date from the Neolithic to the Bronze Age.

Fergusson’s failure to understand the longevity of the Irish monuments was not an original or a unique notion. In 1726 a Dublin doctor, William Molyneux, published a book in which he proposed that even the Stone Age passage tombs were actually monuments constructed by the Danes in the eighth century CE.

It was a similar lack of knowledge that led the Rosdoagh stones to get the name of “Druidical Circles” on old maps and surveys.4 These mysterious stones overlooking the sea where the Glenamoy River enters the Broadhaven estuary appear, to the casual observer, to be two concentric stone circles. This “Druidical” name likely did not reflect any popular tradition that connected the monument with the priests of pre-Christian Ireland. Rather it was more likely a naming convention that occurred throughout the country wherever there was a lack of local tradition, due to the prevailing fascination with all things Druid. This was inspired by the enthusiastic promotion of the noble, if largely imagined, Druids by William Stukeley in the mid-eighteenth century.5 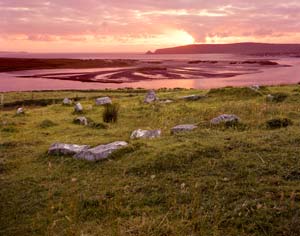 After a closer examination of the stones most observers today consider the monument to be a large court tomb, with a nearly circular kerb of 33 stones that once supported a cairn around 18 m (60 ft) in diameter, with 16 stones surviving from a large but ruined central court with a diameter of about 9 m (30 ft). Yet a book published in 2003 reverts to the earlier misunderstandings of the site, calling it a “ritual circle.”6

All the various authors agree, however, that the site is spectacularly situated, especially as the setting sun echoes its colors onto the patterns of the sand bars at low tide. The high-resolution photograph (right) was made in 1978 using a 4×5 view camera. It is presented here using a technology that allows all its detail to be seen. It is best viewed in full-screen mode. Click the photo, and then click the button at the right of the Zoomify toolbar. (See example.)

But its postcard location does not mean that the Rosdoagh Court Tomb is free from a very modern controversy, the conflict between respect for heritage locations and the lure of commerce. Some observers have noted that the construction of a modern cottage was permitted just outside the edge of the monument.7 An even greater controversy erupted in 2005 when five local landowners were jailed after their refusal to allow Royal Dutch Shell to construct a gas pipeline through their properties near the court tomb.8

Shell acknowledged in its EIS (Environmental Impact Statement) the potential for interference with archaeological remains related to the Rosdoagh monument, and its neighbor a mile to the west, the Dooncarton Stone Circle:

While the men were imprisoned their neighbors blockaded all Shell worksites in the area, and no work was completed. The men were released after 94 days. But in the years since, many others were arrested in a widespread protest movement that at one time involved marches of thousands of people. The situation, in 2011, remains at a standoff, with the pipeline still not completed on its overland route near the ancient Rosdoagh stones.