“…the Druids used to offer black cocks upon the Maryfort cist.’ This was intended to bring about the fulfillment of the sacrificer’s dearest wish; but it was also believed to have brought misfortune in its train. In later days (about 1879) great excitement and anger was caused in a place about a mile from the Maryfort Dolmen. Four quarters of a beast having been found ‘offered’ at the four corners of a certain field.”

“While I was here I met some genuine bona fide idiots: two were dancing around it on one leg in their Bermuda shorts making ‘pow wow wow wow’ noises and another was asserting to the older folk that sacrificed animals were placed on top to please the sun god.”

Drag within the image to explore the Poulnabrone Dolmen in virtual reality.
Click the red hotspots to see the four different perspectives.

The exquisitely-proportioned Poulnabrone Dolmen sits just off a main tourist route, its spacious new parking area accommodating dozens of buses disgorging daily many hundreds of their polyglot passengers. This portal tomb has its own Facebook page, as well as thousands of images that emerge in a Google search. It is located on the stark and stunning karst limestone pavement of the Burren, where the rocky surface of clints (blocks) and grykes (crevices) hold a surprising mixture of floral life, including specimens from other parts of Europe not often seen elsewhere in Ireland.

Most of the tourists, who may take a brisk 20-minutes stroll around the monument and pose for snapshots before they’re back on the bus, have little idea what they’re viewing, and are more than willing to accept whatever tidbits of misinformation are tossed their way (see quotes above).

But while there is absolutely no evidence to associate the monument with either Druids or animal sacrifice, the stones do tell a compelling story of life and death from 6,000 years in the past. 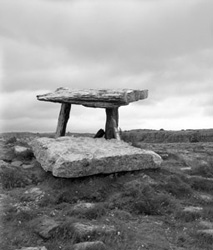 “Poulanabrone” (Poll na mBrón in Irish) is translated as “the Hole of the Sorrows.” While we cannot know what were the particular sorrows that inspired the name, we do know, from its 1986 excavation, that the jumbled bones of 22 individuals—16 adults and 6 children—were entombed here just 25 cm (9.8 in) below the surface. Much later, in the Bronze Age (c. 1700 BCE) an infant was buried just outside the tomb. Archaeologists believe that the tomb continued to be used for rituals well into the Iron Age. The grykes under the tomb, in addition to hiding the bones, also held grave goods including beads, an axe, pottery sherds, and a decorated bone pendant (see photograph, bottom left).

The tall portal stones are each 1.8 m (5.9 ft) high, holding up the front of the immense 3.6 m by 2.1 m (2 by 7 ft) capstone on an angle sloping down to the rear of the tomb. A shallow cairn helped to brace the structure. There is a broken “sill-stone” at the entrance that once may have reached up to the capstone, thus closing off the burial chamber. One of the portal stones had to be replaced in 1988 when its deterioration threatened to collapse the monument; an additional orthostat was then added for support. The high-resolution photograph from 1979 (below, right) shows the monument before its restoration.

The monument’s age, its mysterious name, its evocative shape—some have likened it to a bird about to take wing3—and the way it rises abruptly from an extensive, otherwise featureless, rock shelf, continue to inspire an emotional response in many visitors.

“The stark stone skeleton seemed to shimmer in the air. I blinked and looked again. The distorted, wavery vision remained. What could it be, I wondered. It was a cool, overcast day, so the distortion wasn’t caused by heat waves. Could it be an opening into another dimension?” 4

Of the Neolithic people buried here, only one of the adults lived beyond 40; most died before reaching 30. Even though they died young, they suffered from arthritis, the consequence of a life of ceaseless toil. One person, who may have died soon after being wounded, had a projectile point embedded in his hip bone. The bodies were first interred elsewhere. After a period of time, when only their bones remained, these were carefully exhumed and transferred here.5 Why was this group of people chosen for the honor of being buried in this highly conspicuous location? This we cannot know, but Irish arachaeologist Carlton Jones, who has excavated other tombs on the Burren6 knows that this one is special:

“It forms a striking silhouette that catches your eye from afar and is a solid testament to the strength and cohesion of the group that built it…One of its roles seems to have been that of a “prehistoric billboard.” As a traveler entered the Burren from the north, the impressive bulk of Poulnabrone would leave no doubt in their mind that they were entering the Burren tribe’s territory…Perhaps, Poulnabrone embodies that long gone society’s striving for spiritual answers, in much the same way a Gothic arch or a steeple on a modern church reaches towards heaven.” 7