Posted at 20:15h in Completed, Court and Wedge Tombs, featured by Howard
Share

“…in former times, and even yet, in the islands of the extreme west, except from sheer old age…no one is ever believed to ‘die all out.’ True it is, that all the outward and visible signs of death are there—speech, motion, respiration, and sensation have ceased; the fountains of life are stopped, and heat has fled; the man is ‘cold as a corpse, but what of that? Isn’t it well known he got a blast.’”
…
“So rooted is this belief, that we have known…bread, meat, and whiskey to be brought by the relatives of deceased persons, and laid for weeks after in those places for their comforts! Fairy women are often employed to ‘set a charm,’ and bargain for their release with the king and queen of the gentry [fairies].”

Drag within the image to view the Parknabinnia Wedge Tomb in virtual reality.

Paul Keane, who was 88 when interviewed in his cottage below the Parknabinnia Wedge Tomb, explained what happened to someone who attempted to remove stones from the tomb for use in a building project. This person, according to Keane, got a “violent pain in his side.” But the next day he returned to the task of dismantling the tomb. “And he went home, and he went into bed, and he never got up ’til he died. And he died several times.” Keane goes on to explain how this process continued for “eight or nine days,”2 until he “died all out,” as the quotation at the top of the page puts it. This bit of local folklore concerning the monument may be heard in the video, below right.

There is a common thread between’s Paul Keane’s account of the prolonged death of the tomb-violator, and William Wilde’s report that “…food of different kinds, bread, meat, and whiskey…” might be brought out for the benefit of the corpse. Both these stories, concerning a definition of death that is not entirely finite, coordinate with the report of an early antiquarian visit to the site. William Borlase, when he investigated the tomb in 1897, suggested that an aperture in one side was “large enough to admit the hand, and…may have served…for the introduction of offerings.”3 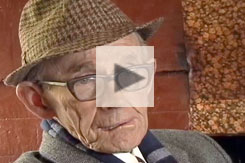 Paul Keane (d. 2001) explains what happened to the unfortunate man who removed stones from the tomb to build a road. (1999).

The Parknabinnia tomb is at the top of Roughan Hill on Co. Clare’s otherworldly landscape of the Burren. This area features at least six other similar monuments, in various states of preservation.4 The tomb sits within the remains of what once was its enclosing cairn. The two side slabs are each 23 cm (9 in) thick and are 3.7 and 4.6 m (12 and 15 ft) in length. The capstone, which may once have had a part of it broken away, is four m (13 ft) long and three m (10 ft) wide. Borlase estimated that the cairn surrounding the tomb, removed some time after 1839, was originally some 15 m (50 ft) in diameter.5 Stones of the cairn are evident on the top of the tomb in his 1897 sketch, below left.

When archaeologist Carleton Jones inspected the tomb in 1999 he discovered fragments of human bone lying on the ground underneath the capstone. He also found some evidence of worked flints and a small pottery sherd. After his discoveries, large flat stones were brought in to protect whatever might remain beneath the floor of the tomb.6

In his text, Borlase suggests that the stones for the tombs were brought to this location from elsewhere. “Blocks of the size and symmetry of those used by the dolmen-builders would nowadays be far to seek.”7 But Thomas Westropp, who investigated the tombs on Roughan Hill a couple of years after Borlase, observed that such large slabs were everywhere to be seen, and “only requiring to be lifted and set in place to make dolmens as large and symmetrical as any now in Burren.”8

Some of the tombs here, as elsewhere, may have been used as makeshift animal enclosures, or even for very basic human habitation in the many centuries after their construction at the end of the Neolithic. A local doctor remembered attending an old woman who lived in one of the tombs. Another was incorporated in the design of a cabin. Westropp described how he saw the straw bed in a tomb at Parknabinnia that “…for many nights sheltered a well-known escaped prisoner, whose subsequent surrender occasioned no little interest at a recent assize [criminal court].”9

Speaking of a different criminal concern, Westropp lamented in 1915 how these structures were often dismantled or broken up by vandals or profiteers.

“In Co. Clare science came too late to explore them: probably every chamber has been violated by greedy, ignorant, unobservant treasure seekers before the dawn of the last century.” 10