…a black shadow fell on the water
On the summer that Cromwell came o’er
When the gay songs of music and laughter
Would throb in the breeze never more.
Long they fought ‘gainst the might of the Saxon,
‘Gainst the musket and dread cannon-ball.
They fell ‘neath the flag of the country
And they sleep near the old Castle wall.

Drag within the image to explore the Minard Castle sites in virtual reality.
An interactive map will appear when you click the button to enter full-screen mode.
Touch here for the mobile version. Touch here for the HMD version.

Many of the threads of the Irish experience are to be found on this rocky storm beach on Dingle Bay. Minard is a triple treasure of Irish archaeology, with perhaps the most picturesquely situated castle ruins in the country, a Iron Age ring fort, and an early-Christian holy well all in close proximity. The drama of the Anglo-Irish conflict, explosively played out here in 1650, was—more than 300 years later—the political backdrop for David Lean’s Oscar-winning 1970 film Ryan’s Daughter, filmed here and at other locations on the Dingle Peninsula. The relevant scene from the film, in which Minard Castle was called “the Tower,” may be viewed in the video clip, below left.2

Hotspots in the virtual-reality environment link from the rocky beach to the interior of the ruined castle. Other hotspots link to the hilltop ring fort at the eastern end of the bay, and to St. John the Baptist Holy Well at the western end. To make use of an interactive map created from a satellite image, view the scene in “full-screen” mode. Click to enter. Then, after the VR panorama is fully loaded, click the full-screen button at the bottom right of its toolbar. (Satellite view ©2011 Google – Imagery ©2011 DigitalGlobe, GeoEye.)

Kilmurry Bay, with its rounded boulders, is also known as Beal na gCloc, the Bay of Stones. It is the initial location of the VR environment, where you may turn the camera angle downward to see the stones in detail. As early as the fourth century CE, elongated brown sandstone boulders from this beach were carted elsewhere in the Dingle Peninsula to be carved in the rudimentary script of ogham characters, the earliest known form of Irish. Used as boundary stones or as commemorative grave markers, ogham stones continued to be produced into the seventh century. This particular beach, with its perfectly suitable stones, may have been an early medieval “ogham factory” for the local populace. Of the 68 ogham stones discovered on the Dingle Peninsula, 15 of them originated here at Minard’s beach. The violent Atlantic storms wash up these boulders and then smooth them on the grinding sand of the strand.3 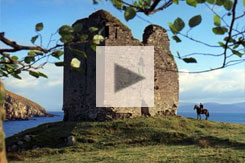 The precariously balanced ruins of Minard Castle dominate the hillock at the western end of the bay, with a fine view across the water to the Iveragh Peninsula on the other side. This rectangular tower house, which originally may have been four stories tall, is now a tottering three-story pile, its outside dimensions measuring 15.2 m x 12.3 m (50 ft x 40.3 ft), with walls up to 3.35 m (11 ft) thick.4 The ruins may be entered within the virtual-reality environment, but due to widening fissures in the walls they should not be entered in person. This former stronghold of the Knight of Kerry was one of the last of the Fitzgerald castles constructed on the peninsula, probably in the late sixteenth century.

When Oliver Cromwell set his sights on the rebellious native Catholic Irish in this part of Co. Kerry,5 he found his foe in Walter Hussey, head of one of the leading Anglo-Norman families in the region. Cromwell’s forces, led by Colonels Lehunt and Sadler, pursued Hussey across the mountains from Castlegregory. Hussey decided to make his stand here at Minard Castle, and by the time the battle was over his battered body was recognizable only because of the single red sock that he wore.6

The better-armed Cromwellian forces placed their cannon at the opposite end of the bay, inside the Iron Age ring fort Cathair na nAcrai.7 Their firepower decimated the castle’s defenders and caused critical breaches in the east wall. When the British noted that the besieged Irish had run out of regular ammunition and were, in desperation, firing their guns with bullets cast from pewter, they felt it safe enough to bring in sappers, who planted gunpowder under all four vaults of the castle.8 Walter Hussey and most of his remaining defenders were crushed in the explosion as the upper stories of the castle collapsed. The few who survived were put to the sword as the British charged in. All were buried in shallow graves where they fell.

An author in 1845 recounted her conversation with the local customs agent:

“He told us that in clearing the rubbish out of the castle, they had found a human skeleton of immense proportions, with a large sword beside it; he thinks the man was standing up close against a wall, when the castle was blown up. When they touched it, it crumbled to ashes.” 9

The Cromwellians may have modified the Iron Age ring fort from which they rained their cannon fire down upon Minard Castle, but it was much more severely damaged by the local Council in the nineteenth century when the stone walls of the fort were removed for use in road building.10 Perhaps had the council members heard from Dingle local John Williams, they might not have been so cavalier in using the fort as a quarry. In a 1979 interview (below, right) Williams explains what happened to a man who decided to take stones from a fort.11 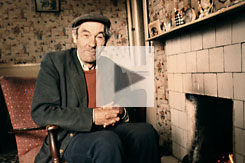 Joe Williams describes what happened to someone who damaged a fort (1979).

On a hill above the beach only the foundation remains from the Church of St. Mary, which was destroyed along with Minard Castle.12 Below it, however, St. John’s Holy Well continues to draw pilgrims to this day. This well, at the end of a path about 180 m (200 yds) west of the castle, was formerly the site of a “pattern” (pilgrimage) day on the 29th of August. Pilgrims would make their rounds about the well, reciting decades of the rosary and—perhaps unique to this well—throwing in one of the blackberries growing on bushes nearby. The well was reputed to contain a golden fish; the pilgrim lucky enough to spot him would enjoy great fortune. Its water, said to cure bodily ills, was imbibed, and was also used to wash the face and hands. A pilgrim once claimed to have a vision of the head of St. John the Baptist close to the well.13 In the virtual-reality environment the well and the adjacent rag tree are linked from the map (full-screen view) or from the hotspot visible at the ring fort location.

The combination of the poignant historical artifacts and the dramatic coastal scenery at Minard Castle was no doubt what led David Lean to incorporate “the Tower” for the development of the climatic romantic moment in Ryan’s Daughter. The multi-year production of the film brought new-found fortunes to many of the inhabitants of the Dingle Peninsula. One of them, an owner of part of the land on which the fictional village of Kirarry was constructed, was Eileen O’Shea. “We used to rear our children and send them off to America,” she said. “Ryan’s Daughter gave us a new lease of life. It got us on our feet. My husband and me bought our first tractor, and we could pass our farm to our son and build a new house….I wish Ryan would have another daughter.”14 As an author commented in her 1845 travel journal:

“It is now a beautiful ruin…the neighbourhood is rich in relics of old decency but the Dane, the monk, and the Norman lord who once kept this place astir, have all disappeared, and the patient cows seem at present to have sole possession, as, grazing down the glen, they add to the tranquility of the whole scene.” 15