The Children of the Mermaid

12 Sep The Children of the Mermaid

Posted at 14:52h in Completed, Stone Circles by Howard
Share

“A mermaid found a swimming lad,
Picked him up for her own,
Pressed her body to his body,
Laughed; and plunging down
Forgot in cruel happiness
That even lovers drown.”

Drag within the image to explore the Children of the Mermaid site in virtual reality.

The seven stones traditionally known as the Children of the Mermaid are on private land and often are completely obscured in the brush. It is for this reason that by some accounts the legend associated with them has migrated, as did the mermaid in the story below, to a different group of stones at the tidemark on the beach below.2

The original stones, which may be seen in the virtual-reality environment at the left, are a group of six boulders and an outlier. These may have been originally associated with an adjacent mound called Cruchancornia, with a ditch and an outer bank. These may date from the late Bronze Age or the early Iron Age. The stones are not considered an alignment, as they do not seem to be arranged in any particular pattern.3

There are other stones featured in Voices from the Dawn that, in legend, were once human beings. In Co. Wicklow, the Athgreany Piper’s Stones were believed to be dancers punished for violating the Sabbath. But the stones on this seaside bluff in Co. Sligo were not, in legend, people accused of any profanity. Rather, it was just a family of seven innocent children.

The story is one still repeated by members of the ancestral clan of the area, the O’Dowds (O Dubhda). It’s now found within online genealogical forums4 and websites assembled by local school children.5 The earliest version in print may be the one by W.G. Wood-Martin, who wrote in 1888 that the legend was “still recounted by the country people.”6

“In old days, when the O’Dowds were Lords of Tireragh, the then chief, when walking early in the morning along the sea-shore, discovered amongst the rocks a mermaid lying asleep, enveloped in a gorgeous mantle, Now everybody—or at least everybody in that locality—knows that if one can only get possession of this special article of a sea-nymph’s costume she at once loses her aquatic nature both as regards form and disposition, and degenerates into an ordinary mortal!

O’Dowd, therefore, stepped forward stealthily, and became the happy possessor of the magic mantle. In this case the wooing was not long in doing, for the chief took the metamorphosed nymph home as his bride, and carefully concealed the gorgeous garment.
Retribution, however, finally overtook him. His seven children were nearly grown to maturity, when, one day his youngest born saw him abstract the mantle from its hiding-place to deposit it where he imagined it would be still more secure. The youth, struck by the manner in which—as he gazed on it—the garment flashed, glistened, and changed hues—ran off to describe its beauties to his mother, who, thereupon seized with a sudden yearning to return to her native element, inquired where her husband had left it. On resuming possession of her long-lost garment she bade her children follow her to the sea-shore, and being now reendowed with all the attributes of a mermaid, she touched each of her children in succession with her magic wand, and thus changed them into seven stones, while she herself plunged into the ocean, and has never again been seen in Tireagh.” 7 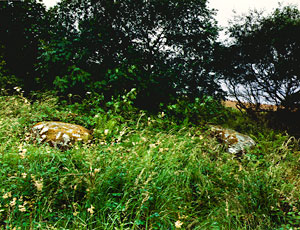 Some of the mermaid’s children are hidden in the brush.

In a coda to the story, found on an “ancestry.com” web site, the tale ends with “Did the youngest child drown? Maybe not. There seems to be lots of O’Dowds around, and they are known to be quite fond of fresh fish.”8 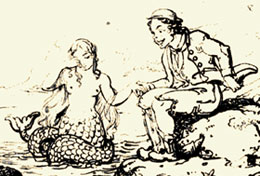 This may be the only megalithic monument in Ireland connected to the mermaid, or merrow, in Irish murúch. However Crofton Croker related a similar legend in 1834: “The Lady of Gollerus.” In this tale, the man seizes the mermaid’s cohuleen driuth, her enchanted red cap, which makes her unable to return to the sea. This story has a happier ending: when the mermaid finds her cap and returns to the deep, she leaves her children behind to live out their lives on land. (See illustration from the book, left.)9

The story of the mermaid’s transformation has parallels in many different folk traditions, as well as within the Disney vault. The Faroe Islanders believe that every ninth evening a seal would shed its skin, assume a woman’s form, and dance through the night. If a man chanced to come by while the creature was dancing, and seized its skin, he would have a wife. Until, of course, she happened to find her skin and use it to return to her briny home. A similar tale is told on the Shetland Islands. In Ireland, Crofton-Croker explains, some families in Kerry (O’Flahertys and O’Sullivans) actually believed that they were descended from marriages between men and Merrow.10 This may have been an effort of these important Anglo-Norman families to legitimize their political aspirations by combining the Continental “seal woman” tale with the more Gaelic notion of a mythical clan goddess.11 W.B. Yeats offers a further explanation of these folk beliefs:

“The Merrow…from muir, sea, and oigh, a maid, is not uncommon, they say, on the wilder coasts. The fishermen do not like to see them, for it always means coming gales. The male Merrows…have green teeth, green hair, pig’s eyes, and red noses; but their women are beautiful, for all their fish tails and the little duck-like scale between their fingers. Sometimes they prefer, small blame to them, good-looking fishermen to their sea lovers. Near Bantry in the last century, there is said to have been a woman covered all over with scales like a fish, who was descended from such a marriage. Sometimes they come out of the sea, and wander about the shore…” 12