“I have been here for 52 years. The stones are up in our hill. He [my husband] had this meadow— just behind the house, now—and he took over his horses, onto the mowing machines, because there were no tractors at the time, he brought them up to that hill, up to the gap going into where the three stones are standing. And—no hope, would they even go inside the gap! They stood up on their hind legs and refused to enter into that meadow.”

Drag within the image to view the Knockfearbreaga Alignment in virtual reality.

The Knocknafearbreaga (Hill of the False Men) Stone Alignment is located near the pub the 85-year-old Mary Harrison still operated when she was interviewed in 1999. As she relates in the video, (below, right) there was something so powerful about this alignment of three standing stones that her frightened horses would not come near them. In the virtual-reality environment (above), when the view is rotated Harrison may be seen sitting in the field in front of the pillars. 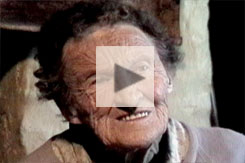 According to Mary Harrison, her husband’s horses refused to be led into the field with the stone alignment. (1999).

This row of stones, each roughly triangular in shape and ranging in height from 1.35 m (4.4 ft) to 1.88 m (6.2 ft), may have originally had a ceremonial or a sepulchral function in the Bronze Age. Or, they may have simply been boundary markers, as the location affords a wide view in almost every direction. When antiquarian T.J. Westropp visited the spot in 1903, the alignment consisted of five stones.
He interviewed local residents who said there were “two others in human memory,”2 making a total of seven. It is not known what happened to the four “false men” now missing. It is likely that they were removed to facilitate land cultivation, or to be used as construction materials.
Westropp speculated that linear monuments such as the Knocknafearbreaga Alignment were meant to symbolize the branches of a tribe, with the height of the stone varying according to each family’s strength. In the same year, Wood-Martin suggested that they were placed where they were so as to affect the illusion, from a distance, of human figures. He reported hearing the same term (fir bréagach) used to signify a scarecrow.3

Traces of the story that gave the stones their name may still be heard locally. It was related in some detail to Westropp in 1892:

“…they were the petrified bodies of seven robbers. ‘The Saint of Tulla’ was building the church there, and he ‘was too busy to cook the bit he ate.’ He, however, owned a blessed bull, which he had trained to fetch and carry, and ‘he used to send the bull, with bags, to Ennis Abbey, where the monks would put up provisions for him.’ Now the seven robbers soon found this out; and they agreed to rob the bull; they lay in wait on Classagh Hill, and seized the animal, beating him and emptying the bags. ‘So the bull roared so loud that he was heared at Tulla.’ The saint stopped building, and he ‘prayed and cursed at the one that was hurting his bull as hard as he know’d how, and that very minute the thieves were struck, and turned into these fearbreags where they stood.’” 4

While this is a local tradition, the twelfth century Life of St. Mochulleus, lost for centuries and only found in modern times, contains a story of seven renegade soldiers and their slaying of the tame bull that ran errands for the saint.5

Westropp lists other places where similar traditions of men being transformed into stone are connected to natural landscape features or to megalithic monuments. St. Brendan, in one legend, was said to have rescued a young man from his assailants by exchanging the youth’s form with a pillar stone. The villains cut off the top of the pillar stone instead of decapitating the young man. In Sligo, when two men were trying to steal a magician’s cow, he used his wand to turn them into stones. Westropp reported that in both these examples the stones were still (in 1903) pointed out by those living nearby.6

Whatever the purpose of the “false men,” perhaps related to these megalithic metaphors is a particular type of standing stone known as a “statue menhir,” found in southern France and northern Italy. These are stones that were roughly sculpted into the representation of a particular person, or a divinity. These standing stones, dating from around the end of the third millennium BCE, have been called “the earliest monumental sculpture in the round in human history.”7