Posted at 20:18h in Completed, Court and Wedge Tombs by Howard
Share

“It is hard to tell sometimes what has been a real vision and what is tradition, a legend hanging in the air, a ‘vanity,’ as our people call it, and made use of by a story-teller here and there, or impressing itself as a real experience on some sensitive and imaginative mind.”

Lady Gregory, Visions and Beliefs in the West of Ireland, 1920 1

Drag within the image to explore the Knockbrack Court Tomb in virtual reality.

Just above the windswept strand at Sellerna Bay, at the western edge of Connemara, the Knockbrack Tomb looks out over the sea. Ten miles off the coast the hills of Inishbofin lie on the horizon, silhouetted at night to appear like a woman in repose. The tomb, which is difficult to classify as a monument type since it has been long ago incorporated into the stones of a field wall, has a four-meter (13-feet) long gallery. Its single roof stone covers a chamber just one m (3.2 ft) wide.2 It is held up by a number of small pointed stones, each less than a meter (3.3 ft) tall. To some, it seems like a stony creature with many stubby legs, or, from another angle, like a bird about to take flight.

In a popular Irish guidebook from 1967,3 the authors call this monument “Labbadermot.” Another seaside tomb, 1.2 kilometers (.75 mile) to the east they labeled the “Druid’s Altar,” These two tombs, with their local labels, represent the two most often repeated popular traditions concerning many Neolithic monuments.

“Labbadermot,” or “ Diarmuid’s Bed” weaves the Knockbrack tomb into the legend of Diarmuid and Gráinne, the fugitives lovers who, it was said, were chased throughout Ireland for a year by Gráinne’s betrothed, the mighty Fionn mac Cumhail, the chief of the Fenians.4 In order to protect themselves from being discovered by Fionn, Diarmuid constructed 365 different “beds” such as this one, where, shielded each night by the capstone of the dolmen, they were invisible to Fionn’s magical vision. This legend is treated in more detail in our entry for the Rostellan Dolmen. 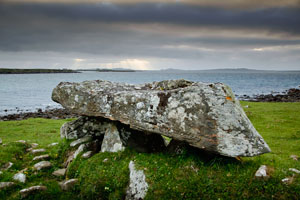 Just a few meters off the beach, the tomb is shown here from the east end, facing Sellerna Bay and Inishboffin beyond.

The tomb on the cliff less than a kilometer and a half (one mile) across Cleggan bay5 was given the name “Druid’s Altar,” as so many similar monuments were during the romantic revival of Ireland’s Celtic culture. This nineteenth-century cultural flourish accorded these poet/magicians a status equal parts noble religious seer and barbaric practitioner of human sacrifice. The historical Druids, by the early years of the Christian era (fifth century CE) had become a spent force, devolved from their tribal roles to the point where the Arch-Druid of Tara was known primarily for his skills as a juggler.6

But in the eighteenth century the popular image was certainly not that of a juggler. By some accounts, even the erosion channels on the capstone of a stone monument were thought to be “channels artificially excavated for the purpose of facilitating the passage of a victim’s blood earthwards.”7 “Druid’s Altar” presented a compelling image, and the name stuck hard, still in evidence in the government’s old Ordnance Survey maps, marked thus in their signature bold Gothic typeface.

When Lady Gregory began her work on Visions and Beliefs in the West of Ireland she was “stirred to do for her own Galway what Hyde had done for Connacht, and Yeats for Sligo.”

Augusta, Lady Gregory (1852-1932), whose Galway manor home at Coole Park was an important venue for artists and writers during the Irish Literary Revival, became fascinated with Irish language and folklore after a trip to the Aran Islands in 1893. She re-wrote the traditional tales she collected using what she called “Kiltartanese,” her effort to translate the syntax of the Hiberno-English dialect she heard into a lyrical English prose.9

In Visions and Beliefs, she sought to understand the distinctions, as she writes in the quote as the top of this page, between “visions” and “vanities” in human consciousness. She evokes Yeats’ explanation of the legendary images, whether of Diarmuid or of the Druid, connected to ancient monuments such as the Knockbrack tomb:

Archaeologists too understand that these monuments cannot be classified simply as places for the interment of the dead. Jacquetta Hawkes has said…”there is little doubt that the monuments must have served as religious meeting-places, the scenes of the seasonal festivities of a simple agricultural people.”11

“…the cumulative psychic presence of the [Knockbrack and Cleggan tombs]…is massive…[They] stand in open land but seem to disassociate themselves from their surroundings and yearn towards the western sea horizon…[These stones] which seem to radiate light and call attention to themselves from afar, may have been as territorial as birdsong: ‘We are triumphantly here, this hilltop and this lowland it oversees are ours.’ And sometimes in the hush of midsummer half-light they [the stones] whisper to the imagination, ‘You cannot see us, but we are still here.’ Ghosts and fairies are moods and modes of one’s feeling for the Earth; they wax and wane with our desires and delusions.” 12