Posted at 08:00h in Completed, Earthworks, featured by Howard
Share

“Some say that Áine’s true dwelling-place is in her hill; upon which on every St. John’s Night the peasantry used to gather from all the immediate neighbourhood to view the moon, and then with torches (cliars) made of bunches of straw and hay tied on poles used to march in procession from the hill and afterwards run through cultivated fields and amongst the cattle.”

Drag within the image to explore Knock Áine in virtual reality. 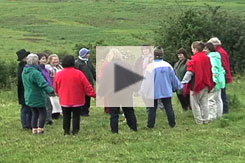 On the morning of the Summer Solstice (1999) Sally Walsh led a group of women in a ceremony at the Rathanny enclosure some 2.5 km (1.5 mi) SE of Knock Áine.

On the morning of the summer solstice in 1999, after the drumming and chanting that welcomed the orb’s entrance into the Grange Stone Circle at Lough Gur faded away, we accompanied a group of women as they climbed the hill of Knock Áine (Cnoc Áine) some 5 km (3 mi) away. Then, beside the ancient earthen ring of the Rathanny ceremonial enclosure close to the River Camoge, they formed a circle and sang their chants to female spirits both pagan and Christian. Their song may be heard in the video, below right.

The ancient monuments on this hill sacred to the fairy queen Áine demonstrate that it was active as a ceremonial site long before the arrival of the Celtic tribes (c. 1000 BCE). Also called Áine Chlair (Áine of the Light), she is reputed to be a goddess of both the sun and the moon, and a love goddess as well. There may be connections between Áine and the similar-sounding goddess Anu.

‘Ah yes, Áine Cli, that’s Aine of the light, the Beautiful’, explained Tom Hamon to an officer of the Irish Folklore Commission in 1972, for in the neighbourhood of her principal Munster sid, Cnoc Aine, she is still recalled with affectionate respect. The territory around this 161-metre-high [528 ft], sickle-shaped hill in Co. Limerick, was known as Deise Beag, literally, ‘Little South’, and stood for Munster in miniature…In this way, dess [south] and sun goddess came together at their provincial headquarters – a coalition emphasized by an alternative name for this part of Co. Limerick, in use till 1690, ‘The Seignory of Any.’2 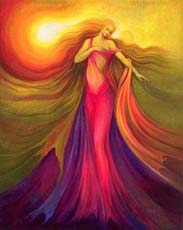 Áine was daughter of Eogabail of the Tuatha Dé Danann. She was known for her power over crops and animals, and was invoked to improve the fortunes of the farmer. Locally she was called “the best-hearted woman that ever lived.”3 Legends connect her with Ailill Olom, a king who forced himself upon the fairy queen. The king acquired the name “Bare Ear” when Áine in her struggles bit off the appendage.4 The symbolic intent of this story, an invading ruler demonstrating his control of a territory through his possession of the local goddess, was repeated in stories from the fourteenth century in which Maurice Fitzgerald, the father of Lough Gur’s quasi-mythical hero Geároid Iarla, was the aggressor.5 This tale, and other stories of Áine at Lough Gur are told by local seanchaí (storyteller) Tom McNamara on our Lough Gur page.

Her modern-day devotees have endowed the goddess Áine with many characteristics. One author, who considers herself a “High Priestess and Solitary Witch of the Old Ways,” presents this list of Áine’s powers and attributes:

“Invoke Áine for love spells, fertility, faery magick, abundance, prosperity, punishing love crimes, keeping magickal vows, revealing faeries, bearing magickal children, and leaving unsuitable mates. The Sun and Moon are her planets, South West is her direction, and Air is her element. The red mare, rabbit, and swan are her sacred animals. The first Friday, Saturday, and Sunday after Lughnassagh are also her sacred days.” 6

The earliest mention of Áine, c. 890-910 CE, was in the Sanas Cormaic (Cormac’s Glossary), containing explanations in Latin of the etymology of Irish words. The goddess is later mentioned in an addendum to the twelfth century Táin Bó Cúailnge, and in the fifteenth century Cath Finntrágha (Battle of Ventry).7 Antiquarian T.J. Westropp, writing in 1919, saw connections between the mythical Áine and the physical remains on the top of the hill that bears her name.

“Little doubt that in the three rings of Dunainey, on the Knockainey Hill, the triad of gods, Eogabal, Feri, and Áine, were supposed to dwell; and they had also their cairns, of which Áine’s one was evidently called Sid Cliath, the sacred mound of Cliu.” 8 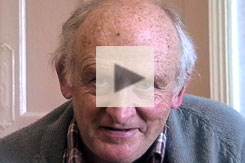 In a 1999 interview (right), local schoolteacher Seán Smyth identified these cairns as “the graves of the three warriors…those three chieftains were supposed to have died defending the hill. And they’re buried on top of the hill.”9 From the top of Knock Áine one can see the hills around Lough Gur, and the cairn on top of Knockfierna more than 20 km (12.5 mi) away. Here, as noted by Sally Walsh in the video, above right, the fairies of Knockainy led by Áine, played a hurling match against the god Donn Firinne of Knockfierna, The victors would ensure the success of their next potato crop.

Westropp noted the mythic narrative suggested by the view from Áine’s hill:

“The long, low hill…has a noble outlook in all directions. The view from such a place should be studied, and it is noteworthy how many prominent points in legend and fairy lore are in sight…The marshy fields and pools at its south- west foot mark an ancient lake, full when the woods of Coill Mór and Coil Cruaidh condensed the mists of the mountain tops, and poured them into the now shrunken Lubach, Saimer, and Camóg.” 10

Westropp goes on to describe Áine’s cairn as “a defaced, insignificant heap of earth and stones wrecked by treasure-seekers.” (See Westropp’s drawing of the monuments on this hill in the gallery below.) To some, the hill resembles a female form with three rings in her belly. These in legend are the dwellings of the Munster tribal ancestors, the Eoghanachta.11 In the early 1930s another monument attributed to Áine was destroyed by road builders. A stepping-stone crossing over the Camóg River was in legend engineered by the goddess herself. It was said that her footprints were to be seen on some of the rocks.12 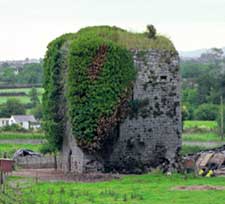 Knockainey Castle, perhaps the legendary site of “Áine’s Leap,” can also be viewed in the virtual-reality environment.

This ruined cairn at the top of Knock Áine may be explored in the virtual-reality environment, above. Hotspots will connect to a 360° panoramic view made at the top of the cairn. From there a hotspot leads back down the hill to the ruined castle in Knockainey village, which, according to Michael Dames is the site of the Earl of Desmond’s banquet hall, the setting for one of the stories of the goddess Áine and her magician son Geároid Iarla.13

It seems that Geároid’s father, when he had his way with Áine, was warned by her that he should never express his wonder at anything their son might do. The story that follows tells of a “leaping contest” between Geároid Iarla and a young woman (representing Áine). This story may help to explain why the goddess epitomizes for her modern followers the power of the “leap of faith.”14

“One memorable evening it happened that there was a gathering of great ladies and gentlemen at the castle of the Earl of Desmond. There was dancing, and of all the ladies none could vie with a certain one among the guests. The grace and the endurance of this young woman were however beaten, every one said, by those of the young Earl Gerald himself.
When the dance was ended, this lady engaged him in another contest, for while all were seated at the supper-table she suddenly arose, and at one leap cleared guests, table, dishes and all, and then leaped back again. The old Earl of Desmond turned to his son and said, “Can you do anything like that?” “No,” said Geróid. “Well, stand up and try. Don’t let yourself be beaten by a woman.” Thus commanded, Geróid Íarla rose to his feet, and making a spring from where he stood, leaped right into a bottle, and then leaped out again. There was great admiration at this feat; and with the rest the Earl of Desmond looked in the greatest astonishment at his son, saying he never thought he had such power. “Were you not warned,” said the young Earl, “never to show wonder at anything I might do? Now you have forced me to leave you.” He turned about at the words, and walked from the hall, his father and others following him. He walked out on the brink of the Camóg, which almost washes the base of the castle, and they saw him step from the bank on the water. Up to that instant he had the shape of an ordinary man, but when he touched the water he was transformed into a goose, and in that form away he swam before their eyes.” 15