“Of their origin we know nothing. They may have been monuments erected over the mighty dead; or memorials of great events that took place where they stand. But as we look on them, still standing in their silent strength, and defying all our efforts to pierce the mysteries of the long buried past, one voice we seem to hear, and it is that which cries: ‘All flesh is as grass, and all the glory of man as the flower of the field.'”

Drag within the image to explore the Kilclooney Dolmen in virtual reality.

In his brief discussion of the Kilclooney Dolmen and its environs, R. Æ. Baillie concludes that, with their history lost, “…it must ever remain a mystery how those huge stones were lifted up and carried, often considerable distances.” But perhaps the biggest mystery about this portal tomb is why there is a miniature dolmen doppelgänger, with its capstone on the ground, only 5 m (16.5 ft) away. The landowner, interviewed in 1979, said that the top of the miniature dolmen was removed around the turn of the century (1900) during a melee involving “a group of tinkers who were camping on the site.”2 In the virtual-reality environment, left, a hotspot connects the main Kilclooney Dolmen with its smaller neighbor.

Archaeologists believe that both of the portal tombs may once have been covered by the same east-facing cairn, some traces of which may still be seen. However it is also possible that the two were constructed in the Neolithic era hundreds of years apart. William Borlase wrote after visiting the site in 1897: “I think it beyond doubt that a covered passage led to the structure from the E. side.” Borlase also reported seeing “two indentations, possible cups [cup marks] on the upper surface of the covering-stone…”3 Contemporary writers have not noted these cup marks.

The high-resolution photograph (below, right) was made with a large-format view camera in 1979. Click the photo, and then click the button at the right of the Zoomify toolbar to see it full-screen. 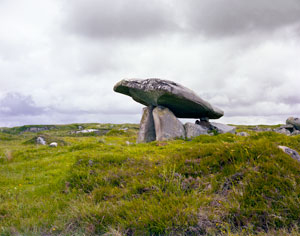 It was the immense size of the megalith’s capstone that so astonished Baillie in 1900, and continues to impress visitors to the site today. It stretches some 4.2 m (13.8 ft) in length and is 3.7 m (12 ft) wide at its front. It is nearly a meter (3.3 ft) thick in places. It has been compared to the massive capstone of Co. Carlow’s Brownshill Dolmen, estimated to weigh in at more than 90 metric tons (100 tons), although the Kilclooney stone seems the more elegant in appearance. Two upright portal stones support the capstone, each 1.8 m (6 ft) high. The lower end of the capstone does not sit directly on the back upright (the backstone), but instead is supported by another small stone on top of the backstone, giving the capstone additional height. This may be seen clearly in the multiple-angle views (see below). There is a low “sill-stone” set between the two portals that may have closed off the entrance to the burial chamber. A similar sill-stone sits in the entrance to the smaller tomb.4

While there has not yet been a comprehensive archaeological excavation at the site, previous finds from the 1.8 x 1.4 m (6 by 4.5 ft) chamber of the tomb include sherds from a thin vessel of well-baked pottery. The outer surfaces of the sherds were reddish in color, but there were not sufficient pieces to determine the shape of the complete vessel, nor its purpose.5

Archaeobotanical studies in the area of these two portal tombs have suggested that the period of their construction coincided with an era of woodland clearance and the initial development of Irish agriculture. The builders of these megaliths may have sited them in close proximity to where they lived and farmed.6 Relatives of these Neolithic farmers may have constructed the court tomb that sits 500 m (1,640 ft) to the east of the dolmens.

We first saw the Kilclooney Dolmen in 1979, after a visit with the archaeologist and guidebook author Peter Harbison during which he described it as “a bird about to take flight.”7 Other observers have seen in its sculptural capstone objects as diverse as a whale, a dolphin, an alligator, a fish, and the Concorde jet. This “what does it look like” discussion may have started with William Borlase, who said in 1897:

“Looked at from the East, the dolmen resembles a great narrow gateway with a huge mushroom-like top.” 8

It is clear that this dolmen, as other portal tombs, can be seen as a monumental shape-shifter, suggesting visual allusions, or acting as a megalithic Rorschach Test. In order to simulate this experience for the website visitor, we’ve created the means to view the Kilclooney Dolmen from all angles. Click on the image, below left. Then, after it opens in a floating window, drag to rotate the view of the dolmen.

Just as there is no agreement what the shape of this dolmen resembles there is no way of knowing for whom it was originally built. We can presume, however, that it was built, with an inspired community effort to mark the death of a person, or persons, of note, and for generations afterwards the spirits of the deceased would be identified with the spot. In 1879 the author Standish O’Grady speculated that,

“To an ardent imaginative people the complete extinction by death of a much-loved hero would even at first be hardly possible. That the tomb which held his ashes should be looked upon as the house of the hero must have been, even shortly after his interment, a prevailing sentiment, whether expressed or not…The size of his tomb would be in proportion to the love which he inspired…” 9 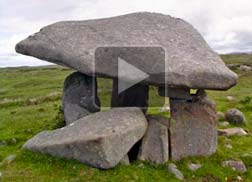 Click for a view of the Kilclooney Dolmen from all around it.

In time, the associations of the Kilclooney Dolmen with the memories of the deceased would have been diluted and, ultimately, completely lost. They were replaced with folktales that inhabit the same geographical space as those long-ago memories of a Neolithic hero. Landowner Tony McNelis said that if you were to make a wish and then toss a stone that stayed atop the capstone, your wish would come true.10

A story recorded around 1945, also from Co. Donegal, explains how the stories about monuments such as the portal tombs often acted as a protective force, saving many of them from being wantonly destroyed:

“There is a big stone standing in a field over in the townland of Fal Garbh. People call this big block of stone the Stualaire [high stone] of Fal Garbh and it is said that itself and the land round about it are gentle [belonging to the fairies] and that it is not right to interfere with it.
Once upon a time a man was ploughing there and thought it would be better to knock it out of the way. He knocked it down and at that very moment all the cattle on the hill went mad and started jumping from the heights. It was necessary to put the the Stualaire standing again, and from that day to this, no one interfered with it.” 11