Posted at 19:05h in Completed, Court and Wedge Tombs, featured by Howard
Share

“remembering spring shadows that would move
lazily over slopes and stressing warmth,
the sleepy stir of the ocean — all
unable to suggest how this village grew
to death, to this graveyard with the motion
only of haze where the stones were raped
from our megalithic ‘giants’ graves’
to form a living tomb for famine
to filter through, like darkness; janus,
always looking back, seeing in a
thrill of sparkling sun on grass where children play
the tarnish brought by time, unable,
like gods, to see what I yet must build
because the sun rots living things away”

Drag within the image to explore in virtual reality the Keel East Court Tomb
and the nearby deserted village of Slievemore. Touch here for the HMD version.

The Keel East Court Tomb sits at an elevation of 152 m (500 ft), just east of the deserted village of Slievemore. Here the craggy upper reaches of the mountain begin their rise up to their peak at 672 m (2,204 ft). When John O’Donovan visited the spot in 1838 he reported that the tomb once was larger than he found it, as it had been “injured both by the fury of the Atlantic storms and the impiety of man.” O’Donovan recounted the story of “an impious miller” who took a stone from a monument that he thought would be the right shape to use as a millstone. However the stone proved to be unsuitable for the purpose, “…and he died exactly in twelve months after!”2 Because of its proximity to the inhabitants of Slievemore, some of its stones may have been removed for use in home construction as well.3

Our virtual reality tour features two views of the court tomb and six views of the deserted village. The photographs were made on three different visits to the site, from 1979 to 2018, during both wet and dry summers, thus the landscape varies in appearance.

The tomb consists of a roughly circular court area, 5 m (16.4 ft) long, leading to a three-chambered gallery. Some 15 stones, each about half a meter (1.6 ft) in height, create the outline of the court. At the entrance to the court are two stones positioned lengthwise. A large slab across the gallery, perhaps meant to be a cover, is 1.6 m long and .9 m wide (5.25 x 3 ft).4

A curious earthwork, resembling a low wall, extends westward 200 m (650 ft) and connects the court tomb to what some have interpreted as another ancient monument. O’Donovan referred to the wall as An Cloidhe Lochlannach, the “Danish Ditch,” from local tradition that it was “built by the Danes [Vikings].”5 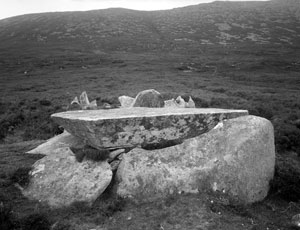 In 1949, when archaeologists Ruaidhrí de Valéra and Séan Ó Nualláin visited the heap of stones at the end of the mysterious track, they concluded that it was not an ancient monument. Rather, they thought it was a “lamb house” used by shepherds from nearby Slievemore village.6

The high-resolution photograph (left) was made with a large-format view camera in 1979. Click the photo, and then click the button at the right of its Zoomify toolbar to see it full-screen.

All megalithic monuments carry within their stones a poignant reminder of the life and death of long-departed human beings. However, the stones of Keel East sit adjacent to an even starker memento of life gone by: an entire deserted village. The ruins of the houses of Slievemore can be visited within the Keel East virtual-reality environment (above) by clicking on a hotspot to the right of the initial viewpoint. In doing so you will leave a monument from the Late Stone Age (c. 3500 BCE) and enter the remains of a community that continued here until the 1940s.

There are 84 ruined houses still clinging to the hillside, the remnants of the 137 structures that O’Donovan noted in 1838. The three linked groups of homes that make up the abandoned village stretch E-W for about 1.5 km (.9 mi). Most of the houses were single-roomed cabins, known as byre-houses, with an area for keeping the livestock indoors during the winter.7 Another deserted village discussed in Voices from the Dawn is located on Inishmurray.

The houses of the deserted village seen today may have been constructed on top of previous dwellings, some dating back to the twelfth century. There may have been a continuous habitation here from the time of the construction of the court tomb in the Neolithic. While the village was abandoned around 1850, some of the cabins were used as seasonal dwellings (booley houses) into the mid-twentieth century. In their practice of transhumance, residents of the seaside villages of Pollagh and Dooagh would move, with their cattle, up to the grazing areas on the Slievemore hillside during the summer months, returning home for the winter.8

William Wilde described such a scene in 1836:

“During the spring the entire population of several of the villages we allude to in Achill close their winter dwellings, tie their infant children on their backs, carry with them their loys [spades] and some carry potatoes, with a few pots and cooking-utensils—drive their cattle before them, and migrate into the hills, where they find fresh pastures for their flocks; and there they build rude huts and summer-houses of sods and wattles, called booleys, and then cultivate and sow with corn a few fertile spots in the neighbouring valleys. They thus remain for about two months of the spring and early summer, till the corn is sown; their stock of provisions being exhausted, and the pasture consumed by their cattle, they return to the shore, and eke out a miserable, precarious existence by fishing. No further care is ever taken of the crops: indeed they seldom ever visit them, but return, in autumn, in a manner similar to the spring migration, to reap the corn, and afford sustenance to their half-starved cattle. With these people it need scarcely be wondered that there is annually a partial famine.” 9

The booleying lifestyle continued in Achill Island long after it had become out of favor elsewhere in the country. The practice, and the seasonal occupation of Slievemore, continued until the 1845-1849 Great Famine (an Gorta Mór). By 1850, most homes were abandoned due to emigration prompted by the famine, rent increases, and the difficulty of farming the exhausted and unproductive small holdings. Most of the villagers who stayed in Achill moved down the hill to the coast, where some sought to begin life anew as fishermen. In the century and a half since, all the cottage roofs have collapsed or blown away, and the some of the stone walls have fallen in. But the ghost-like aura of the many generations who called this hillside home each summer make Slievemore a compelling destination for visitors from around the world.

Each summer the Achill Archaeological Field School conducts classes and investigations of the deserted village of Slievemore, as well as some of the other ancient monuments on the island. In excavations conducted in 2009-2010, a large and complex Bronze Age round house was explored. Evidence suggested that the house was occupied in different periods, from c. 1400 BCE until its collapse. And even afterwards the roofless building was visited, and fires lit in its hearth, until the bog grew up around it. Perhaps such round houses were the first booley homes of the ancestors of the farmers who ultimately took up residence in the now-deserted village of Slievemore.10

The Deserted Village of Slievemore