“They heaved the stone; they heaped the cairn.
Said Ossian, In a queenly grave
We leave her, ‘mong her fields of fern,
Between the cliff and wave.
…
A clear pure air pervades the scene,
In loneliness and awe secure.
Meet spot to sepulchre a queen
Who in her life was pure.
…
And here hard by her natal bower,
On lone Ben Edar’s side, we strive
With lifted rock and sign of power
To keep her name alive.”

The Cromlech on Howth : a poem by Samuel Ferguson; with illuminations from the Books of Kells & of Durrow, and drawings from nature by Margaret Stokes (1861).

Drag within the image to explore the Howth Dolmen in a partial panorama.

The 176 m (578 ft) Hill of Howth, overlooking Dublin Bay from the north, seems a likely spot for the nurturing of place-based legends. It was known as the Ben Edair of Fionn MacCumhaill’s army, the Fianna. Muck Rock, the prominence immediately above the Howth Dolmen, is likely the source of its immense quartzite capstone, 5 m (16.5 ft) long, 5.5 m (15 ft) wide, and up to 2.5 m (8 ft) thick.

Local lore knew this portal tomb as “Fionn MacCumhaill’s Quoit” [a dolmen, or cromlech, today called a portal tomb].2 But nineteenth-century poet and antiquarian Sir Samuel Ferguson believed it to be the grave of the legendary Aideen, who died of grief when her husband Oscar, grandson of Fionn, was slain in battle. Ferguson commemorated the site in his lavishly illuminated poetic work, The Cromlech on Howth, excerpted above. 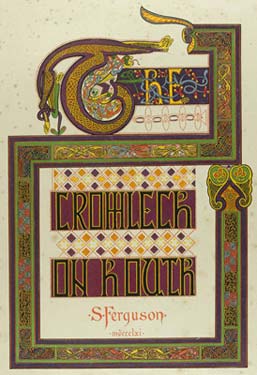 Title page, The Cromlech on Howth.

The tomb’s estimated 68-tonne (75-ton) capstone is the second heaviest in the country, after the Brownshill Dolmen in Co. Carlow. The weight of this massive block long ago splayed out its uprights and broke its supporting stone; the capstone collapsed at its rear, embedding itself in the ground. When it first attracted the attention of nineteenth-century antiquarians, they argued about whether or not the Cromlech on Howth was actually assembled in that fashion, as a so-called “earth-fast” dolmen.3

Ferguson and other visitors of his day would have found the monument in the “dark and beautiful woods” of Howth Castle’s classical seventeenth century landscape (see illustration below, left).4 But today’s tourists will encounter it just beyond the entrance to the “Rhododendron Walk” near the putting green of the Deer Park Hotel’s golf course.

Fionn MacCumhaill began the legendary lineage of Iron Age warriors, and his son Ossian was the poet and chronicler of these Fianna. Ossian had a son, Oscar, who inherited the entire splendid battle prowess exhibited by his father and grandfather. He was known as the bravest of all the Fianna; he killed three kings in his first foray into battle.

Oscar’s wife was the daughter of Angus who lived at Ben Edair (the Hill of Howth). The legends tell us that Oscar was treacherously slain by King Cairbre in 284 CE, after ferocious fighting at the Battle of Gavra, near the Hill of Tara in Co. Meath. It was this battle that spelled the end of the army of the Fianna.5 Ferguson’s poem makes reference to the rath at the battleground where Oscar was said to be entombed:

“No more, dispelling battle’s gloom,
Shall soon for me from fight return;
The great green rath’s ten-acred tomb,
Lies heavy on his urn.” 6

Ferguson’s text reveals that after the news of the battle reached Aideen, staying at her father’s mansion at Howth, she was stricken with grief and died. Ossian and those of her husband’s comrades who survived the slaughter were so moved by the dual tragedies that they built the cromlech at Howth, which we see in a collapsed state today.
Ferguson’s poetic tribute to Oscar and Aideen was well received,7 perhaps in no small measure because it was initially published in a 1861 large format limited-edition monograph, with its lithographed vellum-like pages illuminated with the motifs from two of Ireland’s most revered medieval treasures: the Book of Kells and the Book of Durrow. 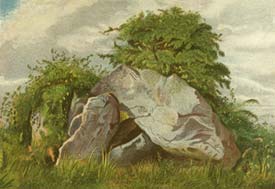 The Cromlech on Howth, by Margaret Stokes, 1861.

This came about because of his friendship with the illustrator Margaret Stokes, whose family, like his own, had a home on Howth. Ferguson wrote the poem “Aideen’s Grave” in 1858, but was unsuccessful in his attempts to publish it until he recruited his neighbor, Miss Stokes, to create the illuminated text and the “drawings from nature.” But as this was Stokes’ first published work, she was acknowledged on the first title page only by her initials.8 Ferguson also recruited his colleague at the Royal Irish Academy, the prominent antiquarian George Petrie, to edit the book’s concluding essay on Celtic ornamental art.

We’ve discovered no evidence of a folk tradition joining the Howth Dolmen to a Fenian legend of Aideen and Oscar prior to the publication of The Cromlech on Howth. Ferguson obliquely referred to a “tradition” connected to the Howth portal tomb. His source may have been a translation of an old Ossianic tale made by Eugene O’Curry. But the author’s usual literary practice was to adapt and reframe a story, which may or may not have had an original Irish source.9 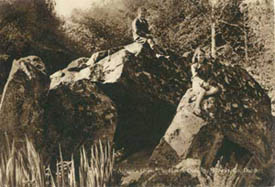 Folk tradition can have many sources and can serve as an inspiration for literature. However the process also works well with the dynamics reversed: literature can and does inspire folklore. It seems that Ferguson’s book created a site-based folklore with staying power, as most references to the portal tomb today mention the connection to Aideen. (See the postcard reproduced to the right.) Author Thomas Hofheinz believes that Ferguson’s poem, whatever its folkloric origin, influenced the later Irish writers, such as Yeats and Joyce, who also looked to geographically-based mythology for their inspiration.

While Ferguson may have been responsible for the genesis of the Howth Dolmen’s folkloric connection to Aideen, others have stepped in to provide continuity to the legend. Ferguson’s poem was reprinted in numerous collections, including his own Lays of the Western Gael in 1865. Another small volume of Aideen’s Grave was published in 1925, with new illustrations by George Cogan and Joseph Tierney (see illustration below, left).11 In 2011 two Dublin-area songwriters, Anne Parsons-Dunne and Niamh Parson, wrote the lyrics for “Aideen’s Grave,” which they set to a traditional tune. The songwriters were working within an open and documented process of creative discovery called the “Wild Bees’ Nest Project.”12

“On a purely visual and tactile level, “The Cromlech on Howth” is an early masterpiece of late nineteenth-century fin de siècle romanticism. On the narrative level, it is a spectacular multi-media exposition of romantic historicism rooted in topographical history.” 10

Such an intimate and transparent account of authorship may have been on Samuel Ferguson’s mind when he, in the final line of his poem, subtly changed its narrator’s voice from Ossian’s to his own. Ferguson was contemplating his role in continuing the memorial to Aideen’s sacrifice. In the creation of this web page, perhaps we do the same.13 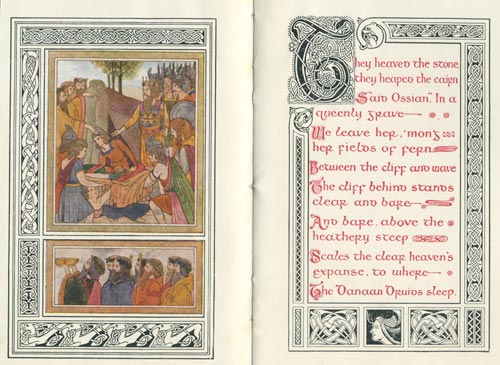 “The long forgotten lay I sing
May only ages hence revive,
(As eagle with a wounded wing
To soar again might strive,)Imperfect, in an alien speech,
When, wandering here, some child of chance
Through pangs of keen delight shall reach
The gift of utterance, –

To speak the air, the sky to speak,
The freshness of the hill to tell,
Who, roaming bare Ben Edar’s peak
And Aideen’s briary dell,
And, gazing on the Cromlech vast,

And on the mountain and the sea,
Shall catch communion with the past
And mix himself with me.” 14