The Grianán of Aileach

25 Nov The Grianán of Aileach

“Seventeen years ago, when this traditional and historic place was first visited by me, I found it in a very ruinous condition, and from that time I commenced to take an interest in its associations. Year after year I witnessed the further advance of its ruin, and I clearly saw that if something were not soon done to arrest the progress of destruction, it would be in a few years a thing of the past.”

Drag within the image to explore the Grianán of Aileach in virtual reality.

Bus loads of schoolchildren drive up the winding road to the top of Greenan Mountain, overlooking Loughs Foyle and Swilly, where the Grianán of Aileach dominates the 244-meter (800-foot) summit. As the youngsters disperse to explore the Iron Age stone ringfort they may not realize that this fort was actually assembled in 1837, from a disorganized jumble, by a local physician with no plans, no detailed description, and not enough stones to build the structure you see today. When Dr. Walter Bernard took on the reconstruction of the fort as his passion that year, he had found it “an immense circular heap of stones, with its gray fallen masonry scattered over the interior—no vestige of a wall, entrance passage, or central building.” 2 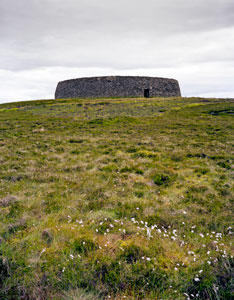 Dr. Bernard and his crew of laborers used for their models other forts they presumed to be of similar antiquity, such as Staigue Fort in Co. Kerry. Their reconstruction turned out to be 23 meters (75.5 feet) in diameter and more than five meters (16.5 feet) tall, with walls nearly four meters (13 feet) thick.3 However one can only speculate if the stepped terraces and the alcoves in the interior of today’s Grianán bear much resemblance to what the Iron Age architects may have had in mind.

The virtual-reality environment (above) begins with a view of the fort from a distance. Clicking on a hotspot will take you to the top of an interior wall. From there another hotspot changes the view to the center of the fort’s interior.

One translation of the name “Grianán of Aileach” is “Stone Temple of the Sun.” 4 An early explorer of the rediscovered site claimed that from the height of the Grianán “the smoke of the sacred fire could have been visible to devout worshippers from a distance as they turned in prayer to this cynosure of their affections.” 5

This nineteenth century reconstruction of the structure was only the most recent Grianán of Aileach. to occupy this strategic high ground. In legend, it was the home of the Dagda. He was the king of the Tuatha Dé Danann who fought the Second Battle of Moytirra against the Fomorians. In this story from the fifteenth century Book of Lecan, the Grianán was built over the grave of the Dagda’s son Aedh, who had been murdered.

“…And he ordered these a rath to build,
Around the gentle youth:
That it should be a rath of splendid sections —
The finest in Erin.
Neid, son of Indai, said to them,
He of the severe mind,
That the best hosts in the world could not erect
A building like Aileach…” 6

Today archaeologists know that the chronicles7 which placed the time of the Dagda and the legendary construction of the Grianán to around the eighteenth century BCE, have little basis in fact. This fort, like other similar ringforts in Ireland, dates from the Iron Age, c. 500 BCE—c. 500 CE.

Yet even in the twentieth century a prominent archaeologist would confidently suggest that, whatever the historical basis–or lack thereof–for the Dadga and his construction of the Grianán, “…if the historians, writing about the sixth century A.D., told of the structure a story which implied that it antedated the coming of the iron-age people-say about 400 B.C.- we may take it that they had good reason for their belief.” 8 A now-ruined mound outside the fort walls was described in 1835 as being surrounded by a circle of 10 stones lying down and pointed toward the center.9 This tumulus may have contained a burial dating from the end of the Stone Age.10

In this diagram the surrounding earthen banks and the remnant of the ancient burial mound may be noted. (OPW)

There is indeed evidence of a structure–from long before the Iron Age–occupying what was to become the site of the Grianán of Aileach. The ancient geographer Ptolemy of Alexandria drew a map of the world in the second century CE which shows the Grianán as one of only five Irish sites to be noted.11 There is a debate today in the archeological community as to whether or not the stone fort that we know as the Grianán of Aileach was actually the royal site of Aileach, the palace of the Ui Néill. The evidence seems to have shifted in favor of the nearby townland of Elaghmore in Co. Derry.12

The only remains of the earlier structure on top of Greenan Mountain consist now of three much-degraded earthen banks surrounding the fort. These are probably the remnants of a hillfort from the late Bronze Age. There is evidence of an ancient trackway running through these banks and leading into the enclosure at the top of the hill.13

Between the two outer banks of the earlier fort is a spring well, now dedicated to St. Patrick, which may have been the water supply for the prehistoric inhabitants of the site. This well was said to have healing powers and was known for a tree where votive offerings were left. In legend it was where St. Patrick baptized Prince Eoghan, who then turned away from his pagan roots and led his clan into the Christian faith.14

Eoghan was a leader of the Ui Néill, the northern clan descended from Niall of the Nine Hostages. Eoghan began a dynasty that brought forth the High Kings of Ireland for more than 500 years.15 The Grianán of Aileach was their symbolic capital from c. 790 CE until the twelfth century. It was to this fort that one of its most famous monarchs, Muircheartach of the Leather Cloaks, brought many hostages with him after his march through Ireland in 941. A verse from the Book of Invasions celebrates this triumph:

“O Muircheartuch, son of valiant Niall!
Thou hast taken the hostages of Inis Fail;
Thou hast brought them all into Aileach,
Into the stone-built Grianan of steeds,
Thou didst go forth from us with a thousand heroes
of the race of Eoghan of red weapons,
To make the great circuit of all Erin,
O Muircheartach of the yellow hair!” 16

Later, to avenge the earlier sacking of his palace in Co. Clare, the Ui Néill rival Murtogh O Brien destroyed the Grianán of Aileach in 1101. To make his destruction of the fort even more certain, and to add insult to injury, the story has Murtogh ordering his soldiers to march home with each carrying a stone from the Grianán, making its repair impossible.17

The missing stones resulting from Murtogh’s insult did not act as an impediment when, seven centuries later, Dr. Bernard from Belfast breathed new life into the Grianán with his reconstruction. He used the story of this battle to explain why it was necessary for him to scour the hilltop for sufficient stones for his workers to use.

“To bind our work into a complete unity we had to gather around the hill about 700 or 800 loose stones — certainly not more, if so many — and to split from the adjoining rocks, cropping up through the heather, 181 coping-stones. These are supposed to serve instead of those removed by King Murdock O’Brien in 1101…” 18

The Grianán of Aileach, has been much altered throughout its history. First it was dismantled by the warriors of Murtogh O Brien. Then came the enthusiastic 1837 reconstruction work of Dr. Bernard. And most recently there was a controversial stabilization scheme undertaken by the OPW in 2007. In history, each generation is able to create its own meaning, as well as its own physical iteration of a monument.

The original version of a prehistoric monument is, by definition, the first and the oldest. But it is never the whole picture. The original monument is the beginning of the story, but the story continues into whatever shape and meaning a nineteenth century antiquarian, or even today’s temporary custodians have provided it. To monitor these changes, the Grianán now has a hero, a protector in the very modern form of a blog singularly devoted to the nuances of its history and to its preservation, Guarding Grianán Aileach.