Posted at 15:32h in Completed, Earthworks, featured by Howard
Share

“It looks like the beginning of the world, somehow: the sea looks older than in other places, the hills and rocks strange, and formed differently from other rocks and hills—as those vast dubious monsters were formed who possessed the earth before man…When the world was moulded and fashioned out of formless chaos, this must have been the bit over—a remnant of chaos!”

Drag within the image to explore the Giant’s Causeway in virtual reality.
An interactive map will appear when you click the button to enter full-screen mode.
Touch here for the tablet version. Touch here for the HMD version.

Why is the Giant’s Causeway, which all but the most seriously fairy-struck will now agree is a natural and not a manufactured wonder, included here in Voices from the Dawn, a project devoted to Ireland’s ancient monuments? Certainly it is an anomaly on these pages, as much so as Stonehenge, the other outlier of the project, which isn’t even in Ireland. But the Giant’s Causeway, otherworldly rock formations along Co. Antrim’s northeast coast in Northern Ireland, has a rich treasure of folklore to suggest its inclusion here. In legend, it was believed to be man-made. Furthermore, this UNESCO World Heritage Site is an irresistible destination for the panorama photographer. 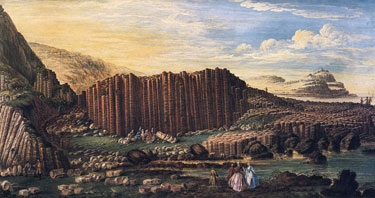 In the virtual-reality environment (above) you can explore the Giant’s Causeway from five different positions, To use the interactive map, wait until the panorama loads completely, then click its full-screen button at the lower right. This map was adapted from a 1696 engraving by Edwin Sandy. The modern access road will be indicated by a colored line.

Geologists will explain that volcanic activity 50-60 million years ago created an extensive plateau here of molten basalt. Cooling rapidly, the fluid rock contracted horizontally and cracked into the distinctive columnar shapes seen today. Some of the columns are 12 m (39 ft) high, and while most of them are hexagonal, they may have as few as four and as many as eight sides.
The tops of the columns may be seen in detail in the virtual-reality environment by aiming the viewpoint downward. In the seventeenth century, when the first reports of the Causeway were made, some suggested that these columns must have been human-engineered. By 1768, however, geologists were beginning to understand that it was a natural result of volcanism on a younger earth.2 As a guidebook author described a nearby beach in 1813:

“[It] exhibits an awful wreck of the terraqueous globe, consisting altogether of immense masses of black lava; so extremely replete with bladder holes and so void of extraneous matter, that it…leaves not the least doubt of its being a volcanic production.” 3

In the world of legend, these 40,000 interlocking blocks of stone were once but the first segment of a roadway stretching across the sea to Scotland. It was built, the story goes, by Fionn mac Cumhaill so that he might make battle with Benandonner, his rival across the strait in Scotland.

The story has been repeated for many generations, and has a number of variations. Here’s one from a popular magazine of 1729, in which a “rough, ruddy-faced farmer” explains the story to a British businessman after he boasts that a new railroad in England is a more impressive sight than the Giant’s Causeway:

“‘Didn’t ould Fin Mc Coul all as one as make that Causeway for the honour and glory of Ireland? And what’s the use o’ talking about your dirty bit o’ a Railway?…”
“And pray, my good fellow, for what purpose did this Fin Mc Coul make the Causeway? Perhaps you can tell us.’
‘With all my heart. You see, Sir, a big Scotch giant, one Benandonner, used to brag that he would lick Fin Mc Coul any day. And he used to go over the Highlands, crowing like a cock on its own dunghill that all he wanted was a fair field and no favour. So, by my souks, Fin went to the King of Ireland—ould Cormac maybe ye’ve heerd o’ him…and he says to his majesty, says he, I want to let Benandonner come over to Ireland widout wetting the sole’ o’ his shoe, and if I don’t lather him as well as ever he was lathered in his life, its not myself that’s in it! So Fin Mc Coul got lave to build the Causeway, and sure he did…to Scotland—and Benandonner came over wid his broad sword and his kilt, and right glad he was to get a dacent excuse for laving his own country. He was bate, of coorse, though he stuck up like a Trojan…'” 4 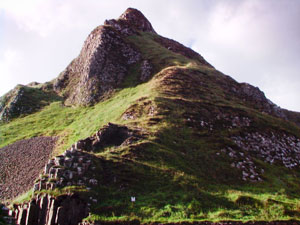 The basaltic columns continue up into the cliffs.

In what might be the most well-known of the legends, when Benadonner arrived for the big fight, Fionn was startled as he spied the Scottish giant’s bulk. So he asked his wife, Oonagh, to disguise him as a baby. She put him in a outsized baby’s crib, and covered him with a blanket. When Benandonner arrived, Oonagh informed him that Fionn was out hunting and would return soon. She asked him to wait nearby as she fed their baby. As soon as Benandonner noted the size of this “infant,” he assumed that its father, Fionn, must be a giant among giants. So he turned around and fled back to Scotland in terror, destroying the Causeway behind him in case Fionn wanted to follow.5

Perhaps the legendary Benandonner lived on the now-uninhabited little Scottish islet of Staffa, directly opposite the Giant’s Causeway, 160 km (100 mi) away. There, basaltic columns identical to those of the Giant’s Causeway (below, right) lead up into Fingal’s Cave in a straight line from the Giant’s Causeway. Is it possible that this bit of geological trivia was known to the ancient inhabitants of the land and developed into the legend of the causeway extending from Ireland to Scotland?6

Prehistoric people, by necessity intimately attuned to the nuances of their environment, would certainly have been aware of these unmistakable wonders of geology. Paradoxically, the Giant’s Causeway was not “discovered” by academe or the media until the seventeenth century. Yet archaeologists believe that nearby Whitepark Bay is one of the sites of Ireland’s settlement 10,000 years ago, after the last ice age.7 So there must have been many generations of people living in close proximity to the monument before Robert Redding, a member of the Royal Society, made a visit there in 1688. Unfortunately, the early Irish have left us no record of their thoughts regarding the place.

Redding, however, reported his discovery in a letter to the Society:

“There was read Sr. Robert Redding’s Description of ye Giants Causey within 2 miles of Dunluce, to the north thereof, in the County of Antrim in Ireland: where there are a vast quantity of Hexagonall Pillars of stone about 8 Inches side, which stand pitch’t perpendicular as in a Pavement running down obliquely into the Sea. These Columns are so regularly ranged and fitted one to the other that it seems rather the work of art than nature…” 8 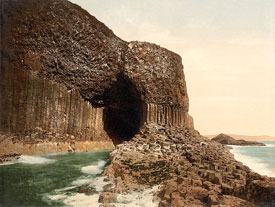 When Redding called it the “Giants Causey,” he may been attempting an English version of the Irish name he found in local folklore, Clochá n na bhFomharaigh, which means “the stepping stones of the Fomorii,” the violent mythological creatures of chaos and violence.9 While it may be that the local legends of the stones are what drew Redding to the site, most subsequent accounts tended to ignore the folklore and to instead explore the Causeway in a rational, scientific manner. 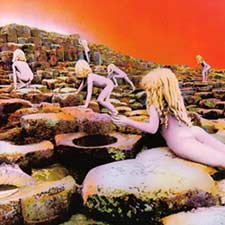 Album cover by Hipgnosis for Led Zeppelin’s Houses of the Holy, (1973)

In 1694 the journal Philosophical Transactions published a complete description of the Giant’s Causeway, along with the first drawing (see gallery below).10 A half-century later, an exchange of letters in the same publication explored the geological connections between the Causeway and similar basaltic columns discovered across the sea in Scotland and elsewhere, including those at the aforementioned Fingal’s Cave.11

Dublin artist Susanna Drury’s watercolor of the stones (top, right) won an important award in 1740. Engravings made from the work were then widely published, bringing more public awareness to the site. Soon, guidebooks advising tourists in Ireland—then still a pioneering lot—waxed ecstatic about the Causeway, even if one author expressed his sympathies for those who toiled at the kelp industry nearby:

“…a more sublime, imposing, and beautiful scene could not by any possibility be imagined by the most enthusiastic mind, than that which bursts on the sight—an immense and magnificent bay, indented by a number of capes and headlands, which rise around from a height of three hundred and fifty to four hundred feet above the level of the sea, presenting at all points a variety of the most magnificent and interesting views—as if nature and art had united their energies to form one truly grand and splendid picture…To behold women and children toiling up this dreadful ascent, bearing heavy loads, either on their heads or fastened from their necks and shoulders is really painful, even to the least sensitive, unaccustomed to the sight —and yet the natives themselves appear to think nothing whatever of it.” 12 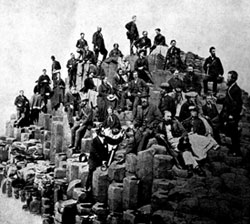 With worldwide publicity, visitors to the Giant’s Causeway came in such numbers that the owners of the land began charging to view the stones. The Giant’s Causeway Company won a court case in 1897 that gave them legal authority to fence in the stones and charge anyone who wished to view them.
There was once a caretaker’s house at the shoreline, where a turnstile admitted ticket holders to walk out to the columns. A Victorian tea room welcomed visitors at the other side of Giant’s Gate, and local villagers sold souvenirs and amenities from their stalls set along the route down to the stones.13 All the blatant exploitation was replaced by a single visitor’s center, far removed from the stones, once the National Trust took over the property in the 1960s. Tourists may now choose to walk the .8 kilometer (.5 mile) pavement down to the stones for free, or take the shuttle bus for a small fee.
In the 1840s however, when Thackeray made his visit, tourists would usually engage one of the local boatmen waiting for them on the beach just below the present-day visitors’ center. To properly see the columns of the Causeway they would plough through the breakers (see illustration in gallery) and then row back into the bay for the best view of the Causeway and the nearby shore caves. As Thackeray described the adventure:

“…I had nothing for it but to yield myself into the hands of the guide who had seized me, who hurried me down the steep to a little wild bay, flanked on each side by rugged cliffs and rocks, against which the waters came tumbling, frothing, and roaring furiously. Upon some of these black rocks two or three boats were lying: four men seized a boat, pushed it shouting into the water, and ravished me into it. We had slid between two rocks, where the channel came gurgling in: we were up one swelling wave that came in a huge advancing body ten feet above us, and were plunging madly down another…I had leisure to ask myself why the deuce I was in that boat, with four rowers hurrooing and bounding madly from one huge liquid mountain to another…” 14