“Various suggestions have been made to explain the Irish name, ‘Gall Aras’…meaning something like ‘The House or Shelter for Foreigner(s)’…the foreigners…being those pilgrims who had come from outside the [Dingle] Peninsula.
…
If this explanation is correct, then the clocháin could truly be described as Ireland’s first and oldest surviving bed-and-breakfast establishments.”

Peter Harbison, Pilgrimage in Ireland: the Monuments and the People, 19921

Drag within the image to explore Gallarus Oratory in virtual reality.

The distinctive upturned-boat shape of the Gallarus Oratory first attracted the attention of antiquarians in the mid-eighteenth century.2 However then as now there was no way to state with certainty the age of the monument. The dry-stone construction of Gallarus contains no mortar, plant or animal remains. The structure has no carvings nor associated cultural artifacts; thus it cannot accurately be dated. It remains timeless.3 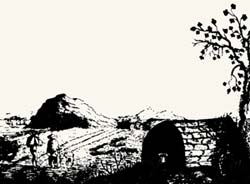 Charles Smith, Antient and Present State of the County of Kerry, 1756

It was constructed of corbelled stone, a technique handed down, with only minor refinements, directly from the great passage tombs of the late Stone Age. From Newgrange (c. 3200 BCE) to a beehive hut, or clochán (c. 500 BCE), to the modern stone outbuildings of the Dingle Peninsula, the Irish have been building these remarkably long-lived structures—able to withstand a thousand years of Atlantic storms—by this technique. The stones are positioned on each course of the wall with their edges projecting inward by a small increment as the walls rise upward. Thus the walls curve together and meet at the top with large capstones. Each stone on the wall is laid at a slight angle, lower on the outside, so that water does not seep into the clochán.4 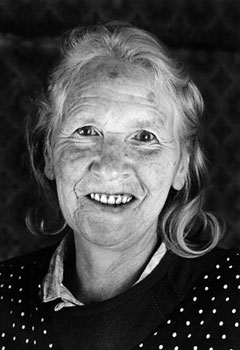 Margaret Baker Foley lived nearby. When we asked about the folklore of the site she invited us in to meet her father, John Baker. Click to see them together (1979).

On the Dingle Peninsula, most notably in the townlands around Fahan, the beehive shaped clochán is still to be seen in many farmyards, some clearly used for habitation in a relatively modern era, with evidence of hearths and wooden doors. The most recent examples make use of a clay mortar, or even cement.5

The small cell-like space inside Gallarus Oratory is approximately 4.8 m (15 ft) by 3 m (10 ft). It can be entered and explored in detail through the virtual-reality environment, above. On the east gable there is a cut-out space that serves as a window, nearly a meter (3 ft) high. The rounded head of this window, looking out to Smerwick Bay, has been the most useful feature in considering a prospective date for the monument. The 1.67 m (5.5 ft) entrance doorway is opposite the window. On the inside near the doorway there are two projecting stones over the lintel, each with a hole used for fastening the door. The small stone cross atop the east gable was placed there in modern times, inserted into an ancient socket stone. In a small leacht (bed of stones) just northeast of the oratory is a 1.1 m (3.5) ft cross-slab, likely pre-dating the oratory, with a sculpted cross and an inscription in Latin: Colum Mac Dinet (Colum, son of Dinet). This stone may be seen in detail within the VR tour.6

Gallarus Oratory has been, for generations, called “Ireland’s oldest surviving church,” or even one of the “oldest intact buildings in Ireland.”7 While there are many other examples of similar construction, all have collapsed at one time or another. Gallarus Oratory, with but a slight sag in its roof, is unique in its survival through the centuries. Many sources date it to the eighth century. George Petrie, writing in the mid-nineteenth century, thought that it might be dated to before the fifth century.8 However archaeologist Peter Harbison is far more equivocal, placing such buildings somewhere between the 9th and the 12th centuries. While the building may well have served as an oratory, or small chapel, Harbison believes that Gallarus and others of the Dingle clocháin were also used as temporary housing for pilgrims arriving for visits to holy sites nearby. Gallarus is located close to the Saint’s Road pilgrimage path up to the summit of nearby Mount Brandon, signposted in the VR tour.9

As noted earlier there are inherent difficulties in dating stone buildings where the style of construction remained practically unchanged for thousands of years. Harbison recounts the story of a colleague returning to the Dingle Peninsula after a year’s absence:

“…He remarked to his host that he did not remember having seen a particular clochán in the backyard the previous year. The reason for this, explaining the host, was that he had built it as a henhouse during the winter.” 10

Even if Gallarus Oratory is but a mere 800, rather than 1200 years old, it has had sufficient time to accrue a body of folkloric tradition. In 1838 Lady Chatterton overheard a local legend about the stones at the top of the window arch:

“[These stones] were held in great reverence by the peasantry in the neighbourhood, who suppose that on them a peculiar kind of bell was once placed, by means of which alarm could be given to the inhabitants of the village…A boy once stole a stone from it. When he got home he began to swell till he would fill the whole house. He became too large to get out of his cabin. Soon his mother restored the charmed stone, and the boy instantly shrunk to his former size.” 11

Another legend, still heard today, contends that whoever is able to climb out of the oratory through its small window will have his soul cleansed. Harbison quotes a 1758 letter which mentions a tradition that the cross-slab marks the tomb of a giant.12

In his meditation on Gallarus Oratory poet Seamus Heaney explores its entranceway as a metaphorical “door into the dark,” which is also the title of his collection of poems published in 1969. He enters this ancient space and senses a kinship with the monks who may have prayed there a millennium earlier.13

You can still feel the community pack
This place: it’s like going into a turfstack,
A core of old dark walled up with stone
A yard thick. When you’re in it alone,
You might have dropped, a reduced creature,
To the heart of the globe. No worshipper
Would leap up to his God off this floor.

Founded there like heroes in a barrow,
They sought themselves in the eye of their King
Under the black weight of their own breathing.
And how he smiled on them as out they came,
The sea a censer and the grass a flame.” 14