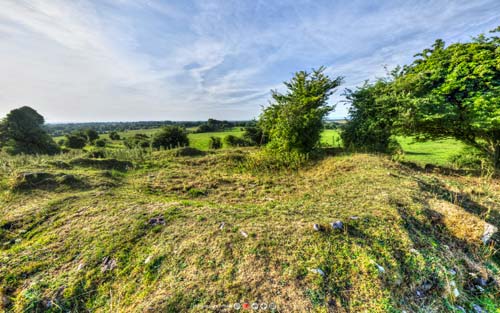 Click to view an animation with Macalister's photograph of the excavated Eastern House superimposed on the site as it appears today.

The “Royal Palace,” with its conjoined ringfort, was thought by Macalister after his excavation to represent two distinct phases of construction and occupation. The larger Eastern Enclosure, with its complex house construction, was thought to be earlier, followed some years afterwards by the Western Enclosure, which he called “a subsidiary accretion.”26 Schot’s examination of the excavation data, however, led her to conclude that the two enclosures of the conjoined ringfort were constructed at the same time.27 Macalister, in another leap of the imagination, suggested that the circular depression surrounding the enclosure would “…be very suitable for horse or chariot races (such as we know were held in ancient Ireland) which might be viewed conveniently from the central enclosure.”28