Posted at 08:17h in Completed, Passage Tombs by Howard
Share

“On the morning of Saturday 29th May I roped Kal into one of my crazy ideas. We would spend the next two days on a modern pilgrimage…We would find a starting point and then let the dowsing rods direct us from site to site. For me, I would set my intention for this pilgrimage to be to work on each of the seven chakras and to see what came out of trying to do that…. So, with the help of the iMegalith iPhone application…we trekked off to the starting point, …close to Four Knocks.”

Drag within the image to explore the Fourknocks Passage Tomb in virtual reality.

The Fourknocks Passage Tomb was unknown and unexcavated until 1950. It has no mention in the old folkloric literature. There were no Sídhe, giants or witches who were said to inhabit the three recesses of its interior. But the absence of fairies in Fourknocks has not put the ancient tomb at any disadvantage in its ability to create a sense of mystery for modern visitors. The monument is a regular destination for “sacred sites” tours designed for the followers of neo-pagan and earth-based spiritual practices.2

Fourknocks—from Na Fuarchnoic (“the Cold Hills”)3—is only 16 kilometers (10 miles) from the more celebrated Brú na Bóinne passage tombs, and may have been created by a related group of Neolithic farmers 3800 years ago. Newgrange and the other marquee tombs were mentioned by the 18th century antiquarians and have been woven into the folkloric fabric of the country since the medieval annals.4 Fourknocks, however, was unknown to archaeologists until a chance conversation in 1949, when a woman making a visit to Newgrange mentioned, “there are mounds like this on my uncle’s farm…”5

Patrick Maguire was the uncle of the woman who first tipped off the authorities to the existence of the mounds near Naul. When Maguire brought archaeologist P. J. Hartnett to view the site they saw “an insignificant mound, much overgrown with brambles and rank grass.”6 But when they cleared away some of the bushes and dug into the surface a large slab with engraved patterns began to emerge. The archaeologist immediately set about planning for a major excavation.

At the conclusion of the dig the investigators reported finding more than 65 burials in the collapsed tomb. They were dated from c. 1800 BCE. Other, later, burials were found in the covering mound. In addition to the cremated and unburnt remains, a trove of decorated pottery and personal ornaments, such as pendants and beads (see gallery, below), were discovered, all now in the National Museum.

The high-resolution photographs below were made with a large-format view camera in 1979. Click the photo, and then click the button at the right of the Zoomify toolbar to see it full-screen. 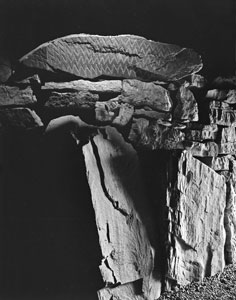 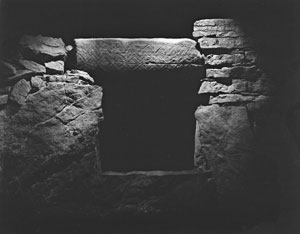 It was determined that the mound, with its small entrance passage and a large central chamber, was never fully covered by a corbelled stone roof construction as found in other passage tombs.7 At Fourknocks a central pole likely held up a wooden roof, long decayed and fallen in. The tomb is now covered with a concrete roof, with hidden openings that allow in just enough daylight for the visitor to slowly discern the decorated stones.

Inside Fourknocks there are 12 stones with very finely rendered engravings, zigzags and lozenges. One design, however, has attracted particular attention because of its resemblance to a human face. This stone, #7 in the excavator’s diagram (see gallery, below) is identified with a hotspot in the virtual reality environment (above right) that will allow a close-up view. It may be the best representation of a human face from the Neolithic period in Ireland.8 It could perhaps have been placed near the entrance to the passage to “strike fear or awe into an unwary person approaching.”9

The dozen decorated stones at Fourknocks represent only a small percentage of the 576 such stones known to exist in 51 sites in Ireland. We cannot know the intentions of the Neolithic artists who created this body of work. And we can only guess the purpose of this stylized face at Fourknocks, if that is indeed what we are seeing.10 The men working on the excavation were the first to note its human features, and came to refer to it as the “clown” or the “Old Man of Fourknocks.”11

“The journey from the outside world into the chamber space is thus a highly orchestrated one, in which the individual is constantly being made aware that he or she is passing between radically different spaces, by being presented with symbols and by being forced to bend down or squeeze through particular parts of the passage.” 12

One additional object found, fragmented within the cremations, is worth a special note. Carved from the antler of a young red deer, a 19 cm (7.5 in) pin with chevron markings was described as a “cult object, symbolic of the power and authority of its owner who was buried there” by Hartnett. (see illustration below) He found evidence that it was broken up before being placed in the tomb. “Whatever the inspiration, [the artist] produced something for which no exact parallel is forthcoming.”13 The National Museum of Ireland compares this object from Fourknocks to a carved phallus-shaped stone found during the excavation of the Brú na Bóinne tomb of Knowth, ascribing them both to “ritual functions associated with fertility…probably in order to stress social and family continuity in the face of the death of individuals”14

Two other mounds in the Fourknocks complex were excavated, but these were not restored and are not accessible. These may be noted in the view from atop the tomb in the virtual-reality environment. One of these likely served as the cremation site for the bones found in the main tomb and was used for later internments. Communal burials may serve to celebrate the entry of an individual into the realm of the ancestors. When the final burial occurred perhaps 2500 years ago the history of the Fourknocks mounds “would have been passed on by word of mouth; they would have been mythologised and become the domain of the ancestors and the spirit world.”15

Whatever mythologies the oral traditions may have created at Fourknocks in the distant past have been long since forgotten. But some visitors to Fourknocks today—such as the dowser quoted at the top of this page—arrive with their own belief systems that they have connected with the tomb. Theories involving the practice of dowsing within these ancient monuments are not new. A 1969 book claimed that prehistoric people built their sacred structures along lines of “geodetic forces” they determined by dowsing. “These would then be recognizable as holy places, and their stones would provide assembly points where people could carry on their business under divine protection and guidance.”16

In 2004 a guide who offers personalized tours of sacred sites and who claims a sensitivity to these geodetic forces reported that he discovered at Fourknocks:

“…two underground streams which flow from the centre of the chamber in a south easterly and a south westerly direction. The North-south energy line seems to connect with the hill peaks of the south of the chamber and is very close to the alignment of the rising of Cassiopeia. The east-west energy line seems to be more sinuous and seems to meander slightly like a river might. And finally between the recesses inside the stones flows another current. The energies may be accessed by anyone with sensitivity and feels like a tingle in the hands and fingers.” 17